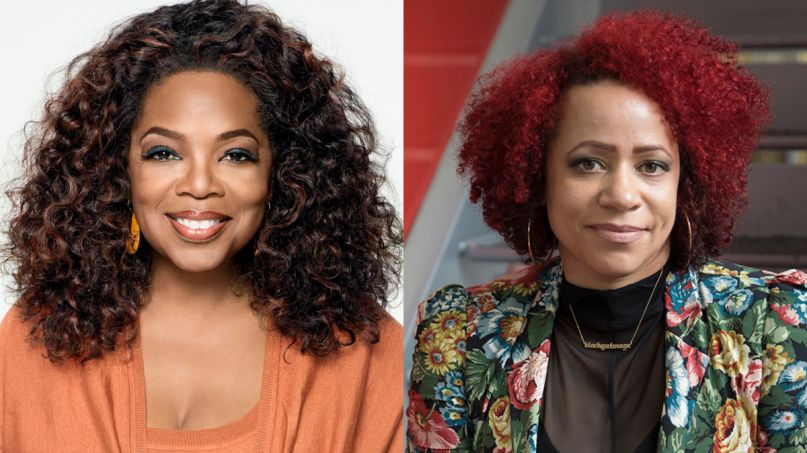 The 1619 Project, Nikole Hannah-Jones’ Pulitzer Prize-winning editorial series for The New York Times Magazine, is being adapted for film and television with the help of Oprah Winfrey.

Released in August 2019 to mark the 400th anniversary of the first time Africans arrived in the United States, The 1619 Project  was a special edition of the NYTM that traced American history through the lens of slavery and its enduring impact. Not only did the collection of poems, essays, and photos reexamine how the country’s original sin shaped it at the start, but it contextualized how the residuals effects are still being felt in modern racism. The editorial series was later followed by a companion podcast called 1619.

Hannah-Jones and Winfrey have now joined with The New York Times and Lionsgate to adapt those stories for film, TV, documentary, and more cross-platform content. The pair will act as producers alongside Caitlin Roper, who was an editor on the print version of The 1619 Project and heads the Times’ scripted entertainment. Hannah-Jones will also serve as creative leader for the multiple projects, all of which will enlist Black creative voices to present The 1619 Project in new formats.

Said Hannah-Jones in a statement to The Root,

“We took very seriously our duty to find TV and film partners that would respect and honor the work and mission of The 1619 Project, that understood our vision and deep moral obligation to doing justice to these stories. Through every step of the process, Lionsgate and its leadership have shown themselves to be that partner and it is a dream to be able to produce this work with Ms. Oprah Winfrey, a trailblazer and beacon to so many Black journalists. I am excited for this opportunity to extend the breadth and reach of The 1619 Project and to introduce these stories of Black resistance and resilience to even more American households.”

For her part, Winfrey said she was “moved, deepened and strengthened” by the “empowering historical analysis” of the “transformative work.” Added Lionsgate CEO Jon Feltheimer, “For many Americans, The 1619 Project was a great awakening and a true history that you probably never learned in school. For others, the project was a fresh analysis of the historical record by one of the world’s leading media authorities.”

There’s no word yet on when the content will begin rolling out, but you can still read the interactive The 1619 Project for free via the NYT website.

It’s been almost a year since we published the #1619Project, the most important work of my life, and I am so excited to announce that we will be partnering with @Lionsgate and the one and only @Oprah to bring this work on slavery’s legacy to tv and film! https://t.co/nAk49WHQsO

When the #1619Project came out almost a year ago, I stood in tearful applause for the profound offering that it was giving our culture and nation. Today, I am honored to be a part of @nhannahjones’ vision to bring her transformative work to a global audience. Stay tuned, y’all! https://t.co/zcmVlLeSKV