Portland Protesters Chant Rage Against the Machine’s “Killing in the Name” at Federal Agents: Watch 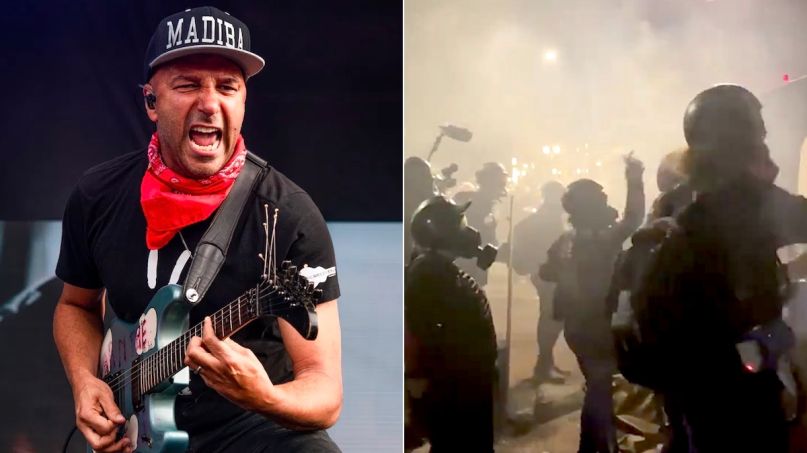 Portland, Oregon, has been an epicenter of sociopolitical unrest in America in recent weeks, and over the weekend, protesters channeled Rage Against the Machine to get their message across. While blasting the band’s “Killing in the Name” over loudspeakers, demonstrators chanted the song’s famous line “F**k you, I won’t do what you tell me” at federal agents.

Footage of the scene posted to social media on Saturday looks straight out of a post-apocalyptic movie, with protesters in gas masks pumping their fists and flipping the bird while screaming the song’s profanity-laced line over and over again at federal agents on the other side of a fence.

Rage Against the Machine guitarist Tom Morello shared the clip, and wrote “#PDX getting their #RATM on.” PDX is a nickname for Portland, taken from the code for the city’s international airport.

The protests in Portland have centered around the city’s federal courthouse, where destruction broke out earlier this month, leading President Trump to send in federal officers to ostensibly protect the building. Some local officials are blaming the federal agents’ presence for reigniting violence in the area over the past couple weeks.

“Killing in the Name”, released in 1992 on Rage Against the Machine’s landmark self-titled debut album, was written in the wake of the beating of Rodney King at the hands of the LAPD. The song, which condemns systemic racism and police brutality in its lyrics, remains as relevant as ever, with the recent death of George Floyd in police custody triggering protests across the United States and the entire world.

Rage Against the Machine would have been in the midst of a highly anticipated reunion tour if the COVID-19 pandemic hadn’t shut down the concert industry. Instead, the band will hit the road in 2021 for an extensive North American tour. See the rescheduled dates, and pick up tickets here.

Watch the footage of Portland protesters chanting along to RATM’s “Killing in the Name” below, and check out our recent playlist of 25 hard-rocking protest songs.

#PDX getting their #RATM on. https://t.co/eCtHPWk6QW