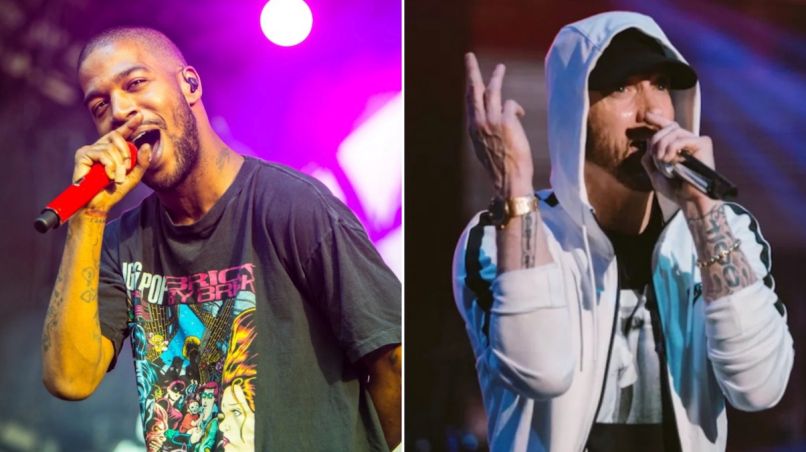 Kid Cudi and Eminem have released their very first collaboration, “The Adventures of Moon Man and Slim Shady”. Stream it below via Apple Music or Spotify. For a high-definition listening experience, you can sign up for a 60-day free trial of TIDAL HiFi.

The joint single was initially announced Wednesday afternoon by Cudi’s own young daughter, Vada Wamwene Mescudi. “Hi! It’s Vada, I’m here to say that my daddy’s new single, ‘The Adventures of Moon Man and Slim Shady,’ is coming on Friday! Check it out!” she adorably revealed in a video posted to Twitter.

It’s not clear whether the new song is just a one-off release or taken from a larger project, such as Cudi’s promised Entergalactic album. The track’s title, of course, is a reference to the two rappers: in 2009, Cudi released a track dubbed “Call Me Moon Man”, while Em has long referred to himself as Slim Shady. Here’s hoping the plural word “adventures” means there’s more coming from this duo of superheroes.

For Cudi, “Adventures” follows his joint effort with Travis Scott, “THE SCOTTS”, which premiered in Fortnite This year, he also put out a solo single, thought to be off Entergalactic, called “Leader of the Delinquents”. Outside of music, he and Kanye West have a new animated TV show on the way based on their Kids See Ghosts collaborative album. Cudi also is said to have “a significant role” in the forthcoming film Bill and Ted 3.

Em let loose his latest album, Music to Be Murdered By, at the top of 2020. Recently, he donated his own mom’s spaghetti to hospitals in Detroit amidst the health crisis. The “Rap God” himself also just ranked his favorite rappers of all time.

“The Adventures of Moon Man and Slim Shady” Artwork: