The Chainsmokers Played a Concert in the Hamptons, And There Was No Social Distancing

Attendees paid upwards of $25,000 for a chance to get corona. 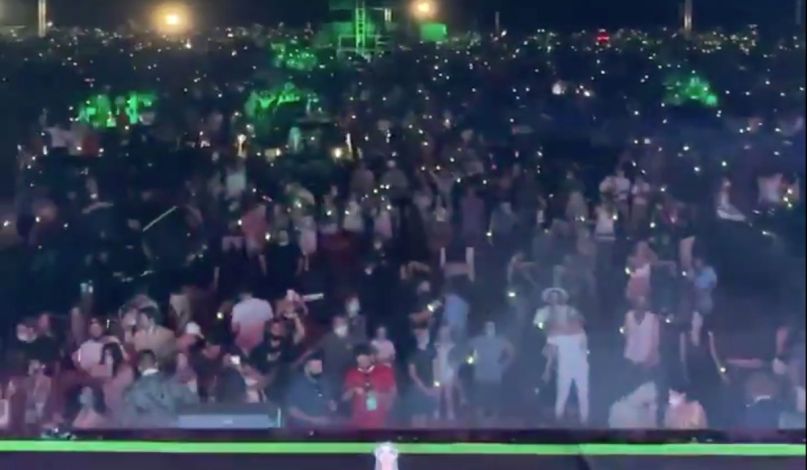 Crowd at The Chainsmokers drive-in concert in The Hamptons

The Chainsmokers hopped on the drive-in concert bandwagon this past Saturday when they decided to throw a charity fundraiser with live music in The Hamptons. While the event was supposed to abide by safety precautions amidst the coronavirus pandemic, it looks like things got out of hand — and now people are criticizing the band because of it, reports TMZ.

The concert took place on a massive 100-acre lot on Long Island with a giant stage for The Chainsmokers to perform on. Concertgoers could attend by buying tickets for a parking spot and staying within its perimeter while watching the show. Over 600 cars turned up with over 3,000 people in the crowd, though. Footage from the event — particularly shots of the crowd from the onstage point of view — reveals that many of those attendees threw caution to the wind for a closer look at the band or a better Instagram story angle.

To be fair, there were a lot of safety precautions put in place. Everyone’s temperatures were checked before entering the plot, parking spots were limited to 20 feet by 20 feet, bathrooms were stationed six feet apart, masks were given to anyone who arrived without one, and hand sanitizer was widely available. But Americans are going to be Americans, which means we can’t be trusted to follow rules — especially when there’s alcohol and a sense of entitlement involved.

How much did these people pay to potentially catch COVID-19? Ticket packages sold for upwards of $25,000, with incentives including a personal RV from which to watch the show, fancy prix-fixe meals to eat there beforehand, and a helicopter ride (?!) that flew attendees you directly to the site. At least all of the money was donated to the evening’s charities: No Kid Hungry, Southampton Fresh Air Home, and the Children’s Medical Fund of New York.

Unsurprisingly, people have been dunking on the band and the audience online for the blatant lack of social distancing during the concert. “Looks like social distancing was strongly enforced,” joked one Twitter user. “When NY gets the inevitable spike just blame these rich selfish white people.”

A screenshot of the promotional pamphlet for the event reveals that The Chainsmokers plan to bring this show on the road. Similar concerts will allegedly be held in Miami, Los Angeles, Atlanta, Nashville, and Chicago, though no dates have been announced as of yet. In a cruel twist of fate, the best thing you can do is right now is heed the band’s own lyrics as advice: “I can’t wait to leave as soon as I arrive.”

Update: New York health officials have launched an investigation into the concert and why it was allowed to take place.

The Chainsmokers had a “Drive-in” concert in the Hamptons last night…looks like social distancing was strongly enforced 🤦🏻‍♂️….when NY gets the inevitable spike just blame these rich selfish white people

The entitlement is wild.. pic.twitter.com/YJZbguMP9N

yikes it looks like they’re planning on doing this in 5 more cities too 🥴 pic.twitter.com/hgQc2diWYB

people expecting the chainsmokers to enforce social distancing has never heard closer, which is a song about stealing mattresses from roommates, biting shoulder tattoos, and listening to blink-182. they don't follow rules. sorry. it's in the song.