In support of their comeback album, Gaslighter 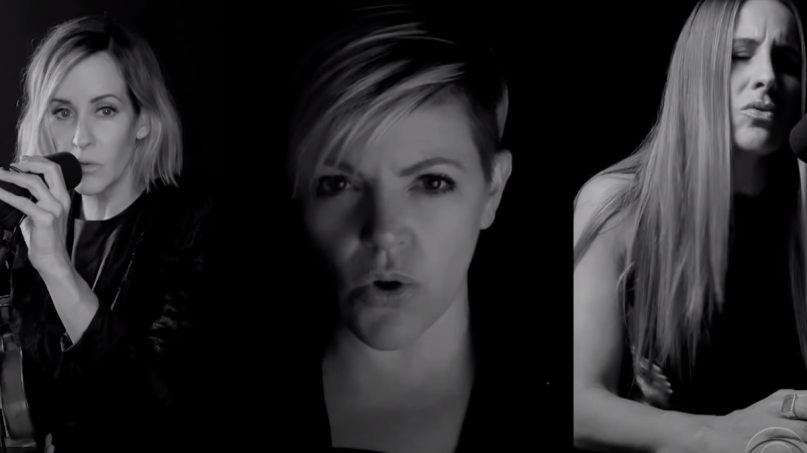 The Chicks on The Late Show with Stephen Colbert

When the pandemic hit and lockdown was initiated, Stephen Colbert was forced to abandon the iconic Ed Sullivan Theater. His last guests scheduled to appear at the New York City landmark were the then-named Dixie Chicks, but they were understandably bumped in favor of CNN Chief Medical Correspondent Sanjay Gupta. On Thursday night, the group now called just The Chicks were finally able to make up that missed appearance on The Late Show with a remote performance of “March March” and a discussion about their new moniker.

Asked why they’d chosen now to drop “Dixie” from their name, lead singer Natalie Maines said a change was always in the works. “Well, it’s because of everything that’s going on in the world. It was about time; we’ve wanted to change it for a long time, actually,” she explained. “We started using ‘DCX’ a lot and ‘The Chicks’ a lot whenever we could. We hoped it would catch on, but it didn’t. So, in the moment now, we just felt that it was right, and we didn’t even have to have much discussion about it. We just all wanted to do it right away, and so we did.” Prior to settling on The Chicks, the group some considered some alternative options for names, including Puss in Boots and using their initials — Martie, Emily, and Natalie — to spell M.E.N.

The Chicks also touched upon the 2003 controversy around Maines’ comments surrounding President George W. Bush’s invasion of Iraq, as well as their plans to tour behind their new comeback album, Gaslighter.

While they can’t be on the road right now, they did promote their comeback album with a performance of the protest single “March March”. Written after the 2018 March for Our Lives youth protest against gun violence, the song still feels bone-chillingly relevant. The Chicks reflected its tense message with a shadowy black-and-white performance.

Replay both segments below. In addition, The Chicks have released the music video for “Sleep at Night”, which you can peep beneath the Colbert clips.

Gaslighter, The Chicks’ first album in 14 years, is out now. It’s title track is already one of our favorite songs of the year.