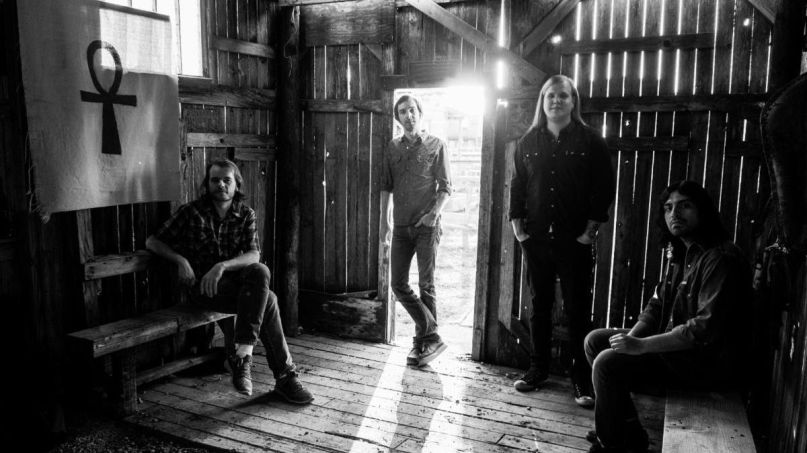 Modern stoner rock owes a major debt to The Sword. Formed in 2003 in Austin, the band’s propensity for Black Sabbath-influenced doom and desert grooves predated the subculture that suddenly emerged from the stoner rock scene in the 2010s. Suddenly, remote fans of bands like Sleep and Electric Wizard were connected by the familiar churning sounds of these bands.

The Sword played a vital role in this movement, with their 2006 debut album, Age of Winters, and its lead single, the now legendary “Freya”, cementing their place in doom metal lore. It was a time of resurgence for classic rock, a new era of teenagers were discovering Led Zeppelin and Sabbath, and “Freya” garnered The Sword a cult audience of eager rock fans. Their music even reached Lars Ulrich of Metallica, who would eventually take The Sword on tour as their opening act.

The Sword’s riffs sounded real. It was more organic, a product of their Austin roots — the creation of a band jamming and working together instrumentally. These artistic inclinations would lead the band away from the formulas of their early heavy output. After turning in a classic with the 2010 concept album, Warp Riders, the band showed signs of change on 2012’s Apocryphon before exploring a different sound entirely on latter albums. The Sword’s shift toward more acoustic, folk-tinged material was, to no surprise, met with a confounded response from the fans who grew up on “Freya” and Warp Riders.

The band’s two new compilations, Conquest of Kingdoms and Chronology, allow the stylistic transition to be heard in a new light. The two sets collect album tracks, live recordings, B-sides, bonus tracks, and unreleased material, spanning The Sword’s six album cycles. Heavy Consequence spoke with singer and guitarist J.D. Cronise about compiling Conquest of Kingdoms and Chronology and the future of The Sword.

On the difference between the two compilations, Conquest of Kingdoms and Chronology

They’re not completely separate from each other. There’s a lot of overlap because of the amount of the material it involved, if we were to do the original idea. The whole career retrospective anthology — including all these album tracks, live tracks, B-sides, unreleased things, pretty much everything we could find in the vault that was useable. We realized at some point — or the label probably informed us — that in order to do a vinyl version of that… I don’t know how many actual LPs that would entail, but it’d would be a lot. That would be an extremely expensive package. So that’s the reason for two different ones: the CD package [Chronology] has more stuff on it because CDs are cheaper. The LP version [Conquest of Kingdoms], we narrowed it down to less material. We left out the album tracks and made it a more lean package to make it appealing to LP enthusiasts.

We tried to offer something different with each one. Chronology, the CD package, includes an extensive booklet with a lot of photos, a history of the band written by me, some contributions from Lars Ulrich, [Lamb of God’s] Mark Morton, and [Clutch’s] Neil Fallon, which was really nice of those gentlemen.

On selecting which tracks to include

Whatever we had that was useable that we hadn’t released, we wanted to just put it all out.  Everything that we had recorded over the years that had never seen the light of day or was only included as some bonus track on a special release of an album. We wanted fans to be able to get all that stuff. I took the idea of Chronology very literally. The way we included the album tracks, the tracklisting is chronological, in the order that we recorded it. So you can look at it as a history of the band in our recordings.

On The Sword’s artist shift from heavy stoner rock to more exploratory folk rock, and how Chronology depicts their growth as a band

It’s just there. Especially when you hear it all together like that. You can hear the transition a bit more. Maybe for some people it will make a little more sense; maybe for some people who our last couple albums confused. The album tracks that we chose for Chronology are about three or four tracks per album — I really just tried to pick songs that were representative of each era and each album of the band, that showcased what we were doing well at that time.

You know Coda by Led Zeppelin, their last album, which was actually just a collection of things that they had recorded over the years that never got released — which I think better than their last studio album [In Through the Out Door]. More recent stuff, one that jumps to mind is an album that Clutch put out a few years ago called Slow Hole to China, which is a compilation of all their odd tracks and weird stuff. It’s not an official, proper studio album, but it’s enough songs that it makes up an album. It’s one of my favorite Clutch albums — it has some of their best stuff on it. And before the album came out, I remember back in early Internet days, they these really low quality versions of a lot of those songs you could download or you could record from the Internet. So I bootlegged my own version of that, that was a really terrible sounding version of that album, years before it came out. So when it actually came out, with good quality recordings, I was stoked. So maybe there’s some people out there who’ve only heard some of these songs [on Chronology] and haven’t had a chance to have a good quality copies of them. I think shit like that is cool.

Bryan Richie, out bassist, did a lot of the mixing for the live tracks and overseeing the mastering. He’s a recording engineer and recorded our first record [Age of Winters]. A lot of the stuff that appears on the compilations, a lot of the unreleased cover songs, he recorded all that. Back in the day when we all lived in Austin and had time between tours and had some free weekends, we just go over to Bryan’s house and set up some stuff and record a song. That’s where a lot of that comes from.

On his personal favorite rare track

One of my favorite things we recorded is a track called “Daughter of Dawn”, which ended up being a bonus track on Japanese version of Warp Riders. And that song was always a particular sticking point with me. Our first manager at that time really rallied hard to make the album a certain length and wanted to keep it under 45 minutes or something like that. ‘Classic albums are short!’ Our old drummer, Trivett Wingo, for some reason was very supportive of that, as well. After a lot of back and forth, they won the argument. That track was meant to be the last track on Warp Riders and it got left off. I always felt it was supposed to be on there. The album is a story, it’s a concept album. It’s the last chapter of the story, and I always felt like we left the ending off. Not that anybody really knows. But for me personally, it always bothered me a little bit. So I am glad that that’s getting a wide release.

At this point I really don’t know. I think everything is up in the air right now. The tour [with Primus] we supposed to do this summer is being rescheduled for next summer. We’re also trying to reschedule the headlining dates we were going to do. So if touring and live music resumes, we’ll definitely be playing shows.

It’s not explicitly stated, because it would be weird to make it about this. But these compilations they do showcase couple first couple eras of the band. We have six studio albums out. The first three were on a label called Kemado Records, and we had a drummer named Trivett Wingo on those albums. Our next three were on Razor & Tie, and with our current drummer Jimmy [Vela]. So if you want to look at this way, our career up to this point can be definitively broken up in those two, three album periods. And we’re at the end of our album contract with Razor & Tie, who aren’t even really a label anymore. Moving forward, all that will have to be sorted out, like how exactly we’ll make records and put them out. I don’t want to be done as a band. I’d definitely like to get onstage again. And if things line up, someday we will be able to make a record again. For now, I’d just like get back onstage.

You can purchase Conquest of Kingdoms and Chronology via Craft Recordings or Amazon.