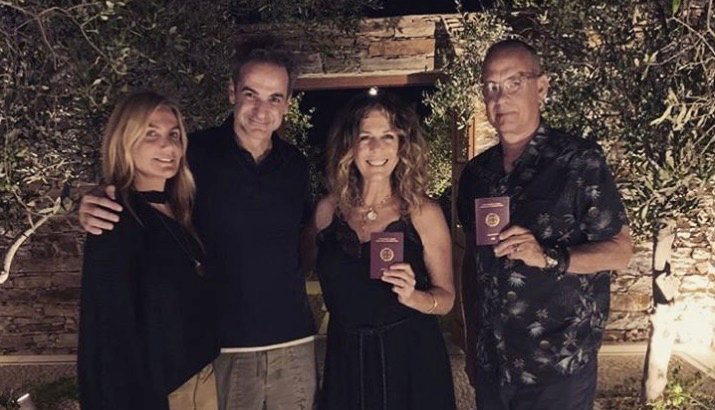 When you have a chance to claim Tom Hanks and Rita Wilson as your own, why would you pass up the opportunity? The country of Greece certainly didn’t, as its prime minister, Kyriakos Mitsotakis, has announced the couple’s honorary citizenship.

Greece first extended honorary citizenship to Hanks and Wilson last year in recognition of Hanks’ efforts in assisting victims of a deadly wildfire near Athens in 2018. The couple are also practicing Greek Orthodox, own a home on the Island of Antiparos, and produced Greek-inspired rom-coms My Big Fat Greek Wedding and Mamma Mia! in addition to both films’ sequels.

In order to cement their Greek citizenship, Hanks and Wilson needed to give an oath to the minister of the interior within a year of becoming Greek citizens, according to CNN. Based on an Instagram photo shared by Prime Minister Mitsotakis, it appears that happened this past weekend.

Despite his new-found Greek citizenship, Hanks remains heavily invested in his role as America’s dad. After himself surviving COVID-19, the veteran actor continues to preach the importance of face masks, going as far to question the patriotism of Americans who chose not to wear them. He also recently took on a new gig as the voice of the Oakland A’s “virtual” concession vendor.