U2’s Bono and The Edge Cover “Stairway to Heaven” in Quarantine: Watch

"We said we'll never, ever play this," quips Bono 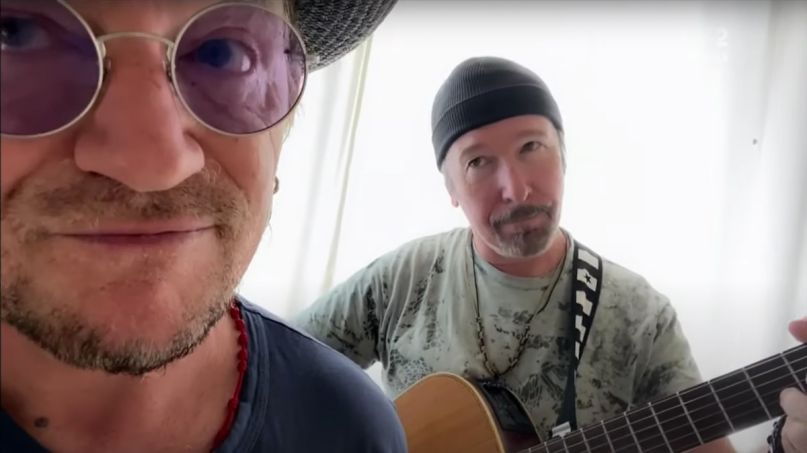 Live music won’t be returning anytime soon, at least not in the traditional way we’re used to. Apparently the reality of this has some artists pining over the good ol’ days, obnoxious drunk requests and all, because St. Vincent covered Led Zeppelin’s staple “Stairway to Heaven” over the weekend… and so too did U2.

As first noted by Stereogum, U2 members Bono and The Edge decided to bust out the heckler favorite for their set during “Songs From an Empty Room”, a night of live music by Irish artists that was broadcasted this past Saturday night. Not only did they indulge the inevitable concert request from the comfort of quarantine, but they also offered a little slice of onstage banter to explain why, exactly, they chose to play “Stairway to Heaven” in particular.

“Our road crew — best in the world, that is for sure — with the U2 group has been all over the world and that is well known,” said Bono in the clip. “But there is one annoying aspect of Irish crew though that has to be said: Wherever you go in the world, whatever venue you’re playing — whether it’s the Olympia or 3 Arena or Madison Square Garden — you walk into the venue and it’s a big moment, and you’ll hear a song that we said, ‘We’ll never, ever play this.’ And that’s right, ‘Stairway To Heaven.’ These professionals believe they play this better than the band. And you know, it might be true.”

The Edge played the opening guitar part beautifully without missing a single not nor over-exaggerating the strums. Meanwhile, Bono wasted no time singing the lead vocal part, allowing himself room to truly belt out some of the heftier notes. They honestly sound pretty great and stay true to the faithful. So no wonder they end it on a joke: “It makes me wonder… if they’re not right!” Watch it below.

While U2 has been unable to hit the road as of late, they haven’t stopped playing music. Back in March, Bono shared several solo performances online. Then, in June, U2 played a part in helping the class of 2020 receive arguably the coolest commencement ceremony of all time.