After he repeatedly and politely asked her to step back 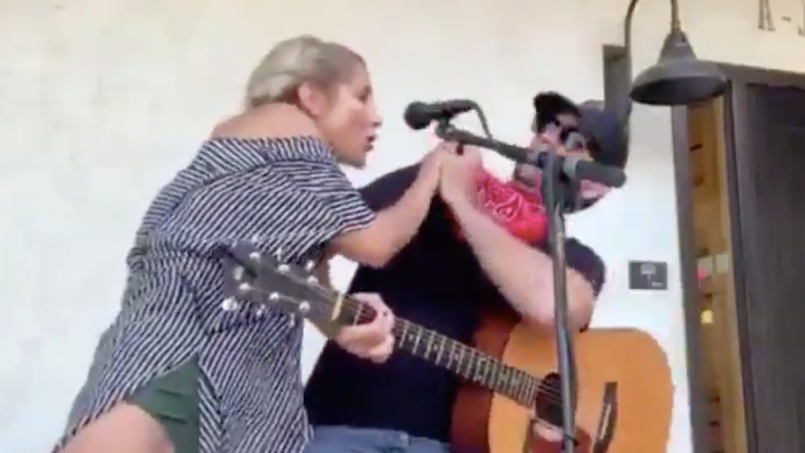 On July 17th, country singer Clayton Gardner performed an outdoor concert for a small, socially-distanced audience in Las Colinas, Texas. During the show, Gardner was interrupted by a woman who jumped on stage, refused his polite requests to step back, and then apparently coughed in his face.

Gardner is best known for his 2015 album Under the Lights and the song “Buy You a Drink”. Last Friday, he performed for “about 30 people,” and livestreamed the set for his fans on Facebook. Afterwards, he posted a video of his altercation with the unknown woman. As he explained, “About fifteen minutes into the show, this random lady walked around all of my gear to sneak up behind me.” Once on stage, she requested a song by another artist.

In the clip, Gardner replied, “If you could do that from like seven feet away, that would be cool.” When she didn’t respond, he insisted. “No, for real. Thank you.”

Rather than leave, the woman sauntered to the center of the stage and stood at his right shoulder. “Are you for real right now? Hey, please get away from me. Please,” Gardner repeated.

She then grabbed him by his bandana, leaned in close, and whispered, “Okay.” Gardner said she also “coughed on me,” although it’s hard to hear over his vamping guitar — she might have just been laughing. Regardless, she was close enough to spray him with droplets of spittle, and if she were indeed carrying the novel coronavirus, Gardner could’ve been infected.

As he later explained, “I was honestly shocked and pretty defenseless sitting there holding my guitar. The audience was equally as shocked.”

The country singer kept his cool, and requested support from the venue and crowd. A man’s voice is heard shouting, “I mean, he did ask nicely.” Eventually, the woman said, “Okay, okay,” and left the stage of her own accord.

In a statement, Gardner defended his right to “take this virus seriously.” He said,

“I’m outraged by her behavior and the behavior of many others in our world today. I would much rather be at home but unfortunately I have to play some gigs to pay my bills, just like the rest of you. I can’t even do that safely and that’s disgraceful. I choose to take this virus seriously to protect myself and the ones I love. That is my right, and I don’t give a damn what anyone else thinks about it.”

In a follow-up video, Gardner said that the individual in question had reached out. “She sent me a lengthy apology, and I accept her apology. She made a mistake. We’ve all made mistakes. I think it’s okay to show her a little grace and forgiveness.” He also defended the venue’s employees and management, and framed the event as a learning opportunity for all. Watch video of the altercation below.

While a few southern states have allowed some restricted outdoor concerts to resume, Lollapalooza’s co-founder thinks regular concert won’t return until 2022 — at least, in the US. Other countries are far ahead of us, and already England will allow indoor concerts beginning next month.

About fifteen minutes into the show, this random lady walked around all of my gear to sneak up behind me. She made a request for an artist and I asked her to please get away from me several times. She then proceeded to grab me by my bandana and cough on me.

I handled it with class and as much patience as I could. I have practiced very safe hygiene and socially distanced myself from the start of Covid to protect my 3 year old daughter. In a matter of seconds this lady took that away from me.

my bills, just like the rest of you. I can’t even do that safely and that’s disgraceful. I choose to take this virus seriously to protect myself and the ones I love. That is my right, and I don’t give a damn what anyone else thinks about it.