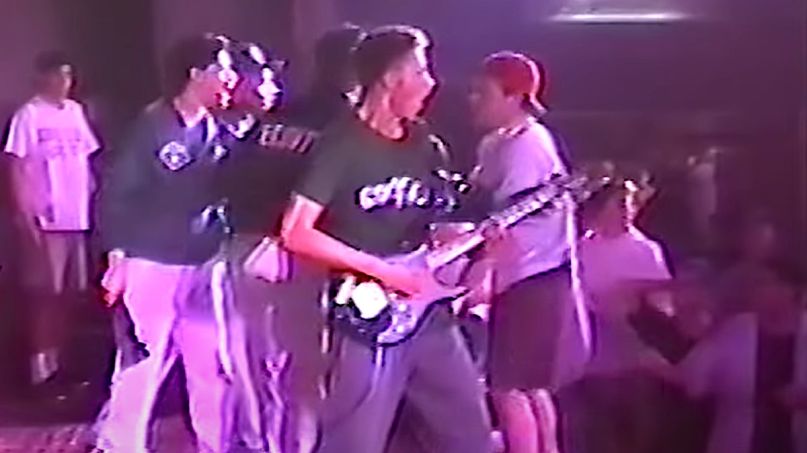 Just a few years before becoming the electrifying frontman of Rage Against the Machine, Zack de la Rocha was cutting his teeth as the guitarist in the hardcore band Hard Stance. Now, 30 years later, video footage of a young Zack playing guitar with Hard Stance at a show in March 1990 has surfaced.

Hard Stance formed in 1987 as a straight-edge hardcore band, with Zack on guitar and Eric Ernst on vocals. At one point, Ernst left Hard Stance, and de la Rocha took over lead vocals, eventually leading to the formation of the band Inside Out.

The gig in question took place March 4th, 1990, and was apparently Hard Stance’s final concert. According to Zack’s Wikipedia page, by 1990 he would have been fronting Inside Out, so the show could have been a one-off farewell with Hard Stance. Nonetheless, it’s definitely a young de la Rocha playing guitar in front of a rowdy hardcore crowd.

In the video, a short-haired de la Rocha lets frontman Ernst take center stage throughout the gig. At one point, Zack takes the mic at 27:48 to introduce a song, but sticks to guitar for the entire show.

Following his stints in Hard Stance and Inside Out, Zack would form Rage Against the Machine in 1991. In fact, the RATM band name came from an album title that Inside Out had planned for their full-length debut, which was never recorded.

The reclusive de la Rocha was slated to reunite with Rage Against the Machine for a massive tour this year. But those plans have been put on hold due to the pandemic. The dates have already been rescheduled for 2021, kicking off June 3rd in El Paso, Texas, with tickets available here.

Watch Zack de le Rocha performing with his band Hard Stance in the video below.