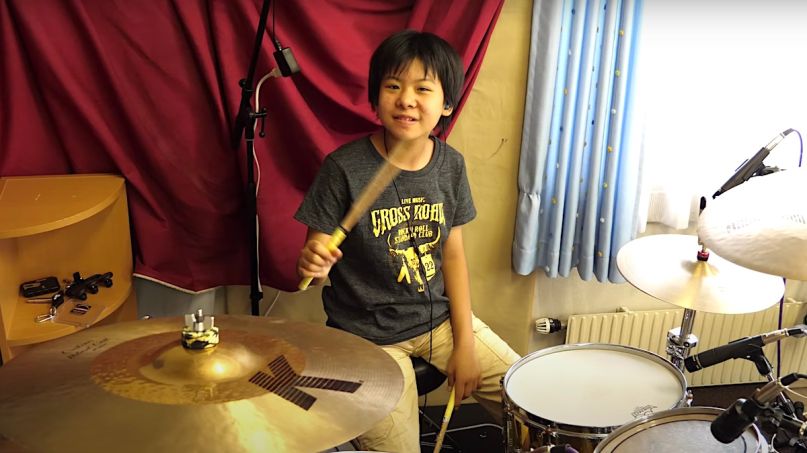 It’s a daunting task for any drummer to take on the iconic Rush song “YYZ”, but 10-year-old prodigy Yoyoka does the late Neil Peart proud with a new cover of the instrumental track.

The Japanese drumming sensation has been making waves for a few years now. Her cover of Rage Against the Machine’s “Bulls on Parade” has 2.6 million YouTube views, and she’s earned praise from such luminaries as Led Zeppelin’s Robert Plant, Red Hot Chili Peppers’ Chad Smith, KISS’ Gene Simmons, and RATM’s Brad Wilk, among others.

Yoyoka has twice appeared on The Ellen Degeneres Show, and during her second visit received a surprise video message from Dave Grohl, who told her she was an “amazing” drummer.

In her latest video, Yoyoka’s skills are on full display, as she plays her way through the Rush classic “YYZ”. The intricate instrumental song became a staple of the band’s live shows after it was released on 1981’s Moving Pictures album, and was a highlight of Peart’s illustrious career.

Peart passed away in January of this year after a private battle with brain cancer. Yoyoka’s tribute in the YouTube description reads, “My name is Yoyoka, I’m a 10-year-old drummer from Japan. I have a lot of respect for Neil Peart. I am sorry he has gone to heaven, but I would like to dedicate a cover of this wonderful song to him. R.I.P.”

The comments on YouTube offer universal praise, with one viewer writing, “My brain cannot comprehend what my eyes are seeing. The fact that you are playing this song beat for beat with a 5 piece set is amazing. Yoyoka you are a musical treasure.”

Another comment reads, “This young lady is pure joy behind that kit and imho a true natural in every sense of the word.”

Yoyoka’s “YYZ” cover is not the only recent noteworthy tribute to Rush. The Toronto Blue Jays are honoring one of their biggest fans by placing a cardboard cutout of Rush frontman Geddy Lee in the stands behind home plate at their temporary home stadium in Buffalo, New York.

Watch Yoyoka absolutely nail Rush’s “YYZ” below, and check out her many other videos at her YouTube channel.