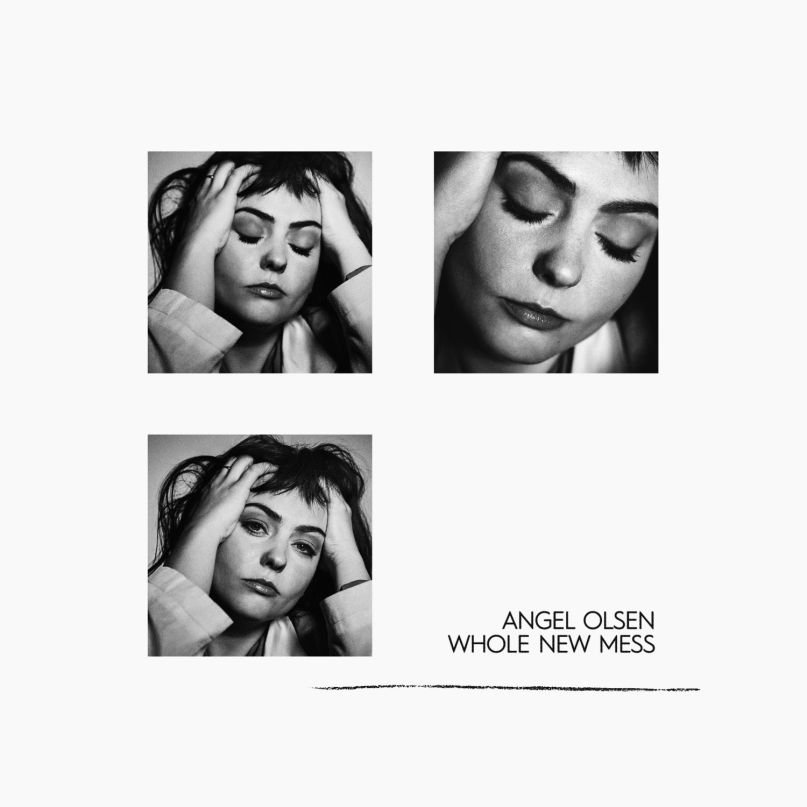 The Lowdown: In October 2018, Angel Olsen and engineer Michael Harris stayed in the small town of Anacortes, Washington, for 10 days and recorded music in a legendarily haunted Catholic church converted into a studio. These were the sessions that ultimately unfurled into All Mirrors, Olsen’s darkly expansive masterpiece from just last year. Olsen returns now with Whole New Mess — a reimagining and reconfiguring of much of that same work, but through a far more restrained and personal lens.

The Good: The tracks on this album are brilliantly haunting. The stripped-back production lets Olsen’s vocals shine through with breathtaking clarity on tracks like “Summer Song”, which feels like a siren song rising through the depths of a sea cave. The same effect surfaces on “Impasse (Workin’ for the Name)” and on “Lark Song”, which sounds much more inward and contemplative than the sweeping “Lark” from All Mirrors and sheds its near-catastrophic climax in favor of a more subdued tone. “Tonight (Without You)” sounds stripped and sleepy and prompts the listener this time to really feel the absence in the title and how much is missing. Yet, there is Olsen’s voice at the center of that quiet: “I like the air that I breathe/ I like the thoughts that I think/ I like the life that I lead/ Without you.”

The times that could pass for more lighthearted still feel laden with something — like “Waving, Smiling”, a finger-picked melody that has an achingly analog feel about it, or the final track, “What It Is (What It Is)”, which brings such an uplift of relief in its rising guitar strums that it almost feels like a shock to the system at the time it arrives.

These songs kind of feel like ghosts of that period in time when, for Olsen, things were still raw. That’s what this album does — if All Mirrors was an encapsulation or a fleshing out of the complete and painful journey of a breakup, Whole New Mess feels like an illustration of how scars like these are ones that our hearts work to resurrect all the time. Old mirrors flash our reflections back at new angles; echoes of the past come back to us in new forms. Maybe that’s part of the “whole new mess” — not only the cleaving moment when one separates oneself from a past self and a past life and a past relationship, but the continual process of crafting a new life that always follows that cleaving. Or maybe real rawness is a myth we tell ourselves, because with enough thought and attention, the gut of an experience can be felt at any time.

The Bad: It feels like here we’re getting the negatives of something many of us already took to be complete. What Olsen has given us here is a unique type of project — not quite a leap into new territory, but also something that does feel developed and provoking in its own right. But after hearing All Mirrors, it’s hard to map new meanings or associations onto each of the songs on here, even though Whole New Mess has done work to give them new sound and new breath. All Mirrors took the skeletons of these songs and built them into stylized worlds, full of glittering illusions and stars and stalactites. Whole New Mess takes the same bones, but it doesn’t develop them as far, leaving the onus on the listener to fill in more this time.

The Verdict: This is an album that makes you think about process. Olsen is reimagining old ideas here, but with an updated imagination, and the resulting music pulls into focus the idea that pieces of art are never stagnant, but instead dynamic manifestations of artistry captured at certain moments in time.

All Mirrors was very presentation-forward, but Whole New Mess is all about Angel — it almost feels like an album she made for herself. Not in the sense that we can’t share in it, too, but in the sense that it’s a reminder of that side of music and what music can be — that, like all art, it’s a way for artists to express themselves and work through things that they’re feeling or experiencing, regardless of the meanings that others fill in. No single recording or version is absolute, because an artist can give a song life anytime, however they see fit. Reinterpreting and rearranging a series of older songs with new tones and styles — especially songs off of an album widely acclaimed for its tone and style — is a vision that not everybody could pull off, but Olsen does.

Pick up a copy of Whole New Mess here.