Bright Eyes’ Down in the Weeds, Where the World Once Was Dances Through Grief and Love: Review 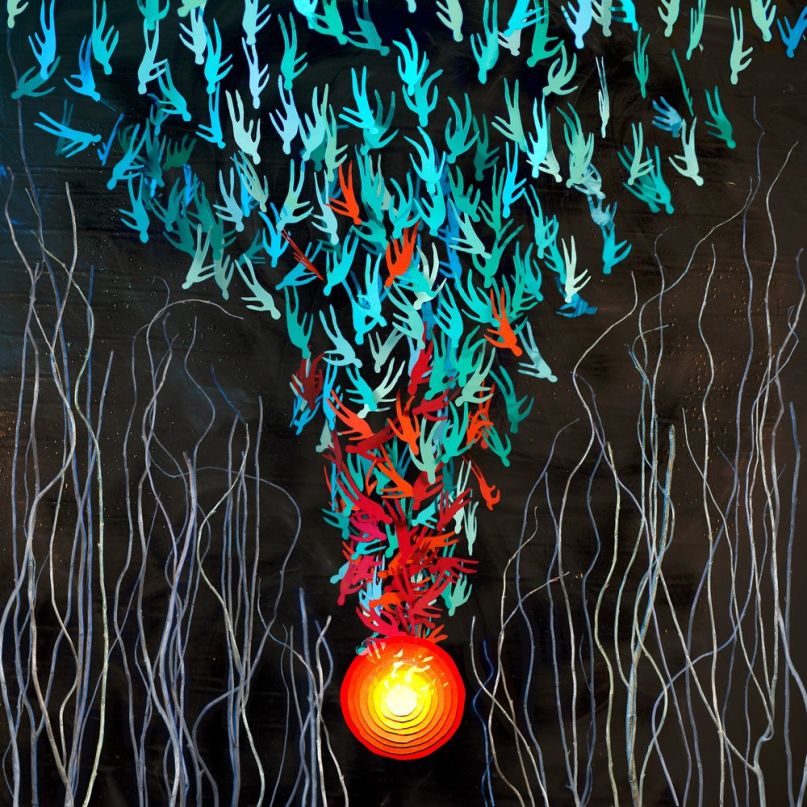 The Lowdown: It’s been nearly 10 years since Bright Eyes released an album, and somehow everything and nothing has changed. Gone, this time for good — as Conor Oberst once declared — is the “rootsy Americana bullshit” that colored career-defining records like I’m Wide Awake, It’s Morning. Sonically, the reunited trio’s newest work has one foot in the stylized hyper-production of their last album, The People’s Key, and another in the Gothic, orchestral sweep of Lifted or The Story Is in the Soil, Keep Your Ear to the Ground. Sure, some of the old emblems remain: the cryptic overture, the half-sentimental, half-ominous soundbites, Oberst’s brooding and beautiful lyrical histrionics. And yet, the album isn’t an outright gloomy one.

In the past decade, the members of Bright Eyes have grown up. Oberst turned 40, lost a brother, married and separated, and recorded a number of wide-ranging side projects in between. Multi-instrumentalists Nathaniel Walcott and Mike Mogis both started families. For all its grim attention to personal and environmental apocalypses, Down in the Weeds, Where the World Once Was is somehow sanguine — if bittersweet — in both melody and meaning.

The Good: Down in the Weeds is a big album: each song feels almost cosmic, and the record itself clocks in at just under an hour. The arrangements are vast and intricate, a blend of fin-de-siècle orchestral pomp, shimmering synthetic effects, “tasteful slap bass” from none other than Flea, who features on half the album, and a bumper crop of instruments, from hammer dulcimers to bagpipes to Marxophones. The album has a sort of Arcade Fire bravura, and Bright Eyes’ willingness to play with melody, tempo, and composition is largely thrilling.

Take “Forced Convalescence”, which mixes Flea’s punchy bass line with bubbly piano before the rhythm dissociates into a delirious soundscape. Like a microcosm for the album — and a nod to Oberst’s own trajectory — the words follow the songwriter from quintessential early-Bright Eyes melancholia (“What happens will be/ Pain of my own making/ Cut short by eternity”) through an almost parodic rehabilitation (“Now I’ve recovered completely/ Life is easy/ Hula-hooping around the sun”) until he is “Overcome with love/ Inter-dimensional, no obstacles/ Mountains and dust.” There’s a sense on this album that Oberst is awed by the everything-ness of existence, that he has moved past grief over life’s disappointments toward an attempt — if not a readiness — to accept them.

But the best tracks on Down in the Weeds, for all their compositional density, are first and foremost propelled by melody. Songs like “Mariana Trench”, “Persona non Grata”, and “Calais to Dover” wield the album’s massive musical ambitions but do not run away with them. In one of the most poignant tracks, “Stairwell Song”, Oberst looks back on a withered relationship with both nostalgia and bitterness: “Nothing changed/ You just packed your things one day/ Didn’t bother to explain/ What happened/ You like cinematic endings.” The instrumentation mirrors the emotional collapse, as Walcott and Mogis’ arrangement swells from pizzicato strings and crescendoing drums toward a swooning horn and string denouement that is as cinematic, sentimental, and heartbreaking as the song’s subject.

The Bad: It is both a boon and bane that Down in the Weeds is so consistently adventurous in its sound. Each song has its own world of detail to offer, and yet, as parts of a whole, they tend to blend together into one resplendent but indistinct tapestry. At 14 tracks, the record runs a little long, sagging some in the latter half with more predictable set-pieces like “Hot Car in the Sun”. Listened to in one go, the album is an ocean of sound, swelling and sometimes overflowing, and it can be hard to tease out the album’s overarching motives.

The Verdict: Down in the Weeds is still a Bright Eyes album, with its share of obsessiveness, narcissism, and angst. Many songs have their sights set on calamity, from climate disaster to Oberst’s failed marriage. And yet, there’s also a refreshing maturity, a perspective that seems a bit wiser, a bit less ready to revel in self-loathing. Bright Eyes shines, as they always have, when they can simultaneously hold dread and optimism, joy and sorrow, in the words and tenor of a song. They do this best on the record’s de facto opener and standout track, “Dance and Sing”: “I’ll grieve/ What I have lost/ Forgive the firing squad/ How imperfect life can be/ Now all I can do/ Is just dance on through.” The song feels like the most natural connection between present-day Bright Eyes and Bright Eyes of years past — behind a reverberating guitar and grand strings, a pedal steel and banjo lay buried like a relic — but also the most surprising. In its finale, the orchestration collides with a garish choir that echoes the line, “There was only love.” That culmination — from grief to love — is what truly makes these Bright Eyes songs feel new.

Pick up a copy of Down in the Weeds… here.