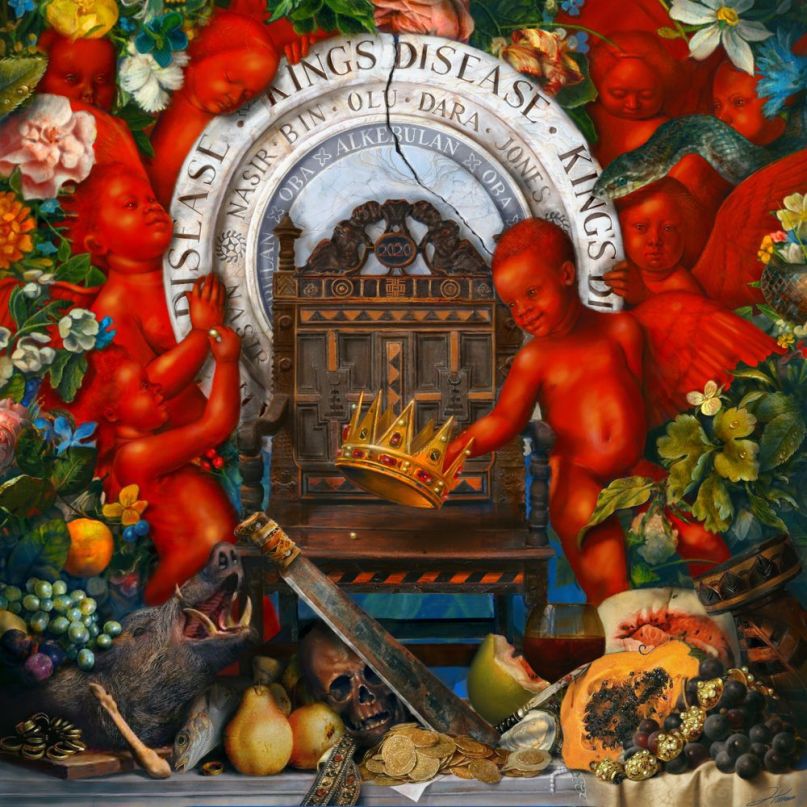 The Lowdown: In 2018, Queensbridge-bred lyricist Nas released his 12th studio album, NASIR. In being a collaborative effort with Kanye West, this LP was met with high expectations. However, whether it was the album’s lack of cohesion, its poor timing, or the chaos surrounding its production and West’s antics, NASIR was deemed underwhelming by both fans and critics alike.

After disclosing that he would be working with the Grammy-winning producer Hit-Boy on his upcoming project, some people were skeptical that this approach could help the rapper revert back to form and the high-quality work that had preceded NASIR. On August 21st, Nas and Hit-Boy succeeded in silencing critics and reintroducing the legendary emcee to a new generation of listeners with King’s Disease.


By definition, “king’s disease” is when a person develops gout. Also called the disease of riches, it can be contracted as the result of the overconsumption of certain foods, mainly meat, seafood, and alcohol. As the common theme of the album, Nas uses this as a metaphor for how, in life, one must focus on the right things and avoid indulging in negative behavior.

The Good: Throughout his career, Nas’ best attribute has been his ability to deliver vivid imagery through his lyrics. He proves his excellence as a storyteller on tracks such as the Charlie Wilson-assisted “Car #85”, speaking about his experiences as a youth growing up in the projects and how he was able to evolve as a man through trial and error. “I used to be at the Tunnel 20 deep in a huddle/ Razors on us that’ll make skin bubble, Moet we guzzle/ Chris Lighty let me in a few times with nines/ That’s on God … I wish you would’ve walked by,” Nas recounts with an almost obsessive attention to detail on “Blue Benz”.

King’s Disease is also an album that speaks to the importance of self-love. On “Ultra Black”, “10 Points”, and “The Cure”, Nas talks about staying the course throughout turmoil, confidence in oneself, and inspiring others by positive action. He also lets his core fanbase know that he has not lost a step when it comes to his rapping prowess. Nas is at his best on “27 Summers,” where he brings us into his world of riches and displays his rare usage of semantics, and “The Definition” (feat. Brucie B) showcases Nas’ knack for substance-filled songs, touching base on the state of the world that we live in.

Perhaps the most poignant aspect of this 13-track album is the focus on the relationships that men have with Black women — the good, the bad, and the ugly. “Til The War Is Won”, which features Lil’ Durk, challenges men to respect single Black women and to appreciate the constant struggle that they deal with on a daily basis. “Replace Me” (feat. Big Sean and Don Toliver) and “All Bad” (feat. Anderson .Paak) are meditations about the regret of a failed relationship as well as the pain of the retrospective admiration for a former love.

All of the guest appearances on King’s Disease are impeccably placed. Along with the previously mentioned artists, Fivio Foreign, A$AP Ferg, and, of course, Hit-Boy all feature. The collective of Nas, AZ, Foxy Brown, and Cormega (otherwise known as The Firm) were reunited on “Full Circle”. As one of the standout cuts on the album, Dr. Dre adds to the nostalgia of “Full Circle” with a surprise, uncredited guest verse. A legend in his own right, the good doctor raps, “Ha, got me out here on my first-degree murder shit/ Stretch marks from this art, I gave birth to this,” during the track’s closing seconds.

The Bad: In the past, Nas has sometimes been accused of being overly “preachy” in his music. During what many considered the twilight of his career, there would be narratives about African gods and obscure social constructs — only people with a certain level of knowledge on those topics could relate – thus alienating the audience that remained. However, on King’s Disease, he and Hit-Boy achieve a favorable medium. “Powerful people will silence you, they try to mute you/ Unethical ways put you in prison, try to roof you,” Nas spits on “The Definition”.

Concepts of racism, an underachieving presidential administration, poverty, and global warming are all addressed throughout this album. The consistent high-level production, along with Nas’ reinvigorated delivery make room for an enjoyable (and necessary) audio experience. While there have been instances in his career where his lyrics reached far beyond some of his listeners’ heads, King’s Disease is educational but still easy to digest.

The Verdict: King’s Disease serves as a guideline for the young, Black male on how to survive on many levels. Having pride in who you are, loving and respecting your female companion, and protecting your peace are all lessons that African-American men should abide by in order to achieve emotional, mental and spiritual stability. Sonically, King’s Disease takes a step forward in dissolving Nas’ reputation for choosing less-than-stellar production on many of his projects. From start to finish, this album ceases to stray from its main concept, and Nas doesn’t have to sacrifice the quality of his music to do so. Primarily produced by Hit-Boy, King’s Disease delivers a feel appropriate for the times and hits the mark as being one of the better rap albums of the year.

Essential Tracks: “Full Circle”, “The Cure”, and “Replace Me”

Pick up a copy of King’s Disease here.