The Killers’ Imploding the Mirage Goes All in on a Better Tomorrow: Review 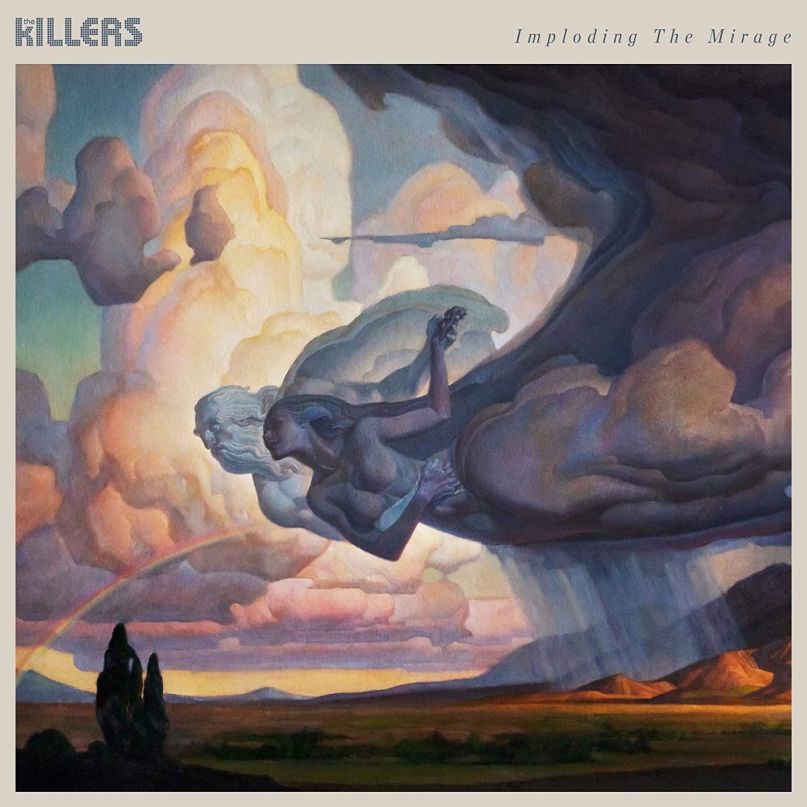 The Lowdown: The Killers have always sounded like a band born to run. Living in the desert of Las Vegas will have that effect. For 16 years, Brandon Flowers and company have been running away down highway skylines, on the backs of hurricanes with Springsteen-like abandon. However, until now, they’ve always seemed to be running from what plagues them — fears, depressions, and the oppressive trappings of Small Town America — instead of toward what inspires them. Despite Flowers’ advice on Wonderful Wonderful single “Run for Cover”, The Killers have always seemed to have one eye looking back over their shoulder as they blow across an expansive wilderness, seeking some sort of escape from it all through romantic, heartland lyricism and rock and roll bombast.

2017’s Wonderful Wonderful caught The Killers in the midst of their darkest night (while still glimmering with neon brilliance) and featured some of Flowers’ most personal writing to date. The confessional “Rut”, about his wife’s struggles with PTSD, inspires tears with each listen as he vows to climb out of the darkness victoriously like the protagonist of an ‘80s film. Still, the focus of Wonderful Wonderful is not on the promise of the future, but on the broken sprint away from the past. On Imploding the Mirage, Flowers focuses his vision forward, fixating on a hope he can’t help but celebrate and running full speed ahead.

The Good: Imploding the Mirage is gigantic and jubilant. Despite the ongoing hiatus of electrifying guitar player Dave Keuning, The Killers enlist a wealth of talent to bolster the album’s heaven-reaching sound. Lindsey Buckingham rips through storm clouds with his guitar feature on lead single “Caution”; Weyes Blood angelically floats as she sings “The weight has been lifted” on “My God”; k.d. lang contrasts Flowers’ bold vocal with quiet strength on “Lightning Fields”; and producers Jonathan Rado (Foxygen) and Shawn Everett (The War on Drugs, etc.) imbue the entire record with dawning radiance and the grandest choruses of The Killers’ career. And that’s saying something.

Even with the wonderful supporting cast, Flowers remains front and center in all his ridiculous glory. He shuffles across “Fire in Bone”, doing his best David Byrne impression as he talk-sings, “I felt washed up/ I felt tempest-tossed and seasick,” before launching into a Prodigal Son-like refrain: “And you took me back home/ After all that I took from you/ After all that I put you through/ Here I am.” May it never be said of Flowers that he isn’t earnest, no matter how grandiose or absurd his lyrics get (highlights include “Lightning fields of love,” “We’re cut from a stained-glass mountain,” and, well, “Imploding the mirage”).

On “When the Dreams Run Dry” — a Peter Gabriel-esque highlight with a very unsubtle reminder that “We’re all gonna die!” — the 39-year-old “starts to wonder “‘bout the time theft/ How much of it you’ve got left” and resolves to journey into the unknown by his lover’s side nonetheless. There’s a maturity in The Killers’ music that started to emerge on Wonderful Wonderful and really takes root here. Far from the “jealousy” of “Mr. Brightside”, The Killers now explore more carefully and wisely the joys and sorrows of loyal relationship as they’re “Running Towards a Place” where unconditional love has the final word.

The Bad: In Imploding the Mirage’s focus on a hopeful and joyful future, however, the nuance and balance exhibited on the previous two Killers albums is sacrificed. Every chorus is big. Every riff is reaching for the stars. Rarely are we given a moment to sit at the base of the mountain and meditate — like we’re given on “Rut” — before revving up for an all-out charge toward its peak. The hope of the future is always more rewarding when we’re allowed to soak in the discontent of the present first.

Another element inhibiting us from fully rooting for the Killers here is the lack of storytelling and specificity that really aids earlier songs like “Runaways” or “A Dustland Fairytale”. Instead, Imploding the Mirage is peopled with fairly generic, archetypal characters like Bon Jovi’s Tommy and Gina or Journey’s small-town couple. Where Wonderful Wonderful felt written just for Flowers and his wife to help them work through depression, Imploding the Mirage is for anybody. I guess that’s the downside to arena rock stardom.

The Verdict: It’s fitting that the album’s lead single is about throwing caution to the wind, since that’s the attitude with which The Killers shoot for the stars on every project. They don’t always meet their transcendent goals, but on Imploding the Mirage, just the hope of a future beyond pandemics, racial injustices, pain, and everything else 2020 has given us is enough. It energizes them to keep running and keep striving, to hold on to the people they love and brace for the blowback, to strike out sometimes while swinging for a home run. Like Flowers sings, “It’s some kind of sin to live your whole life on a might’ve-been.” It’s a sin The Killers can never be accused of committing, and that’s worth celebrating.

Essential Tracks: “Caution”, “When the Dreams Run Dry”, and “Imploding the Mirage”

Pick up a copy of Imploding the Mirage here.