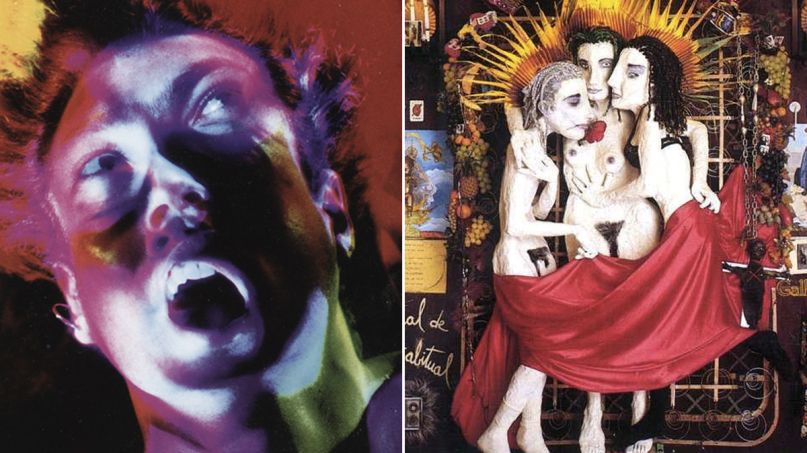 The rise of ’90s grunge and alternative rock can be traced back to a handful of significant moments, but one date in particular stands out: August 21st, 1990. On that same day, Alice in Chains and Jane’s Addiction released Facelift and Ritual de lo habitual, respectively, signaling a new shift toward textural, artful, heavy music. The albums parallel one another in myriad ways — from sonic congruencies to shared influences — a point best illustrated by mutual producer Dave Jerden, who worked on both LPs successively.

The addictive ethereal vocals of Perry Farrell and the group’s eclectic blend of metal, post-punk, and funk had already caused a turning point in pop music when 1988’s Nothing’s Shocking shot the band from the ranks of CMJ and college radio to widespread acclaim. The singles “Jane Says” and “Mountain Song” garnered FM airplay and remain alternative rock staples. In many ways, Jane’s Addiction were one of the unclassifiable bands that gave rise to the term “alternative.” It wasn’t hair metal; it wasn’t goth; it wasn’t indie rock. Jerden co-produced Nothing’s Shocking alongside Farrell and would return to the role for the follow-up, Ritual de lo habitual.

Ritual was recorded in early-to-mid 1989 at Track Record Studios in North Hollywood, California. Its notable for its structured tracklist, the first six songs existing independently from the final three — “Then She Did…”, “Of Course”, and “Classic Girl” — which are dedicated to Xiola Blue, Farrell’s girlfriend who died of a heroin overdose in 1987 at the age of 19. These songs are far more melancholy and introspective than the six songs before them, addressing topics with a barren emotional honesty rarely seen in a major-label rock act at that time.

Of course, Ritual de lo habitual also contained chart-topping hits like “Been Caught Stealing”, which entered regular rotation at MTV, and “Stop”, a highlight of the band’s live show, among other fan favorites like “Three Days” and “Ain’t No Right.”

Meanwhile, a band called Alice in Chains had just signed a major label deal with Columbia Records, becoming one of the first acts of Seattle’s burgeoning rock scene to do so, along with Mother Love Bone, Soundgarden, and Screaming Trees. Growing out of the glam metal and hard rock scene — symbolized by a well-timed name change from “Alice N’ Chains” — the band’s demo showcased a heavier, darker direction, influenced by the scene’s prevailing sounds and Soundgarden’s drop D tuning. Dave Jerden was tapped to produce Alice in Chains debut, Facelift.

“I remember the first demo they did with Rick Parashar at London Bridge [Studio], before I worked there, sounded so good; it sounded like a record,” engineer Dave Hillis told Mark Yarm in the grunge oral history Everybody Loves Our Town. “They weren’t hair metal, and the weren’t quite the Alice you know. … The most drastic change with Alice really came when they started using Dave Jerden as a producer.”

Jerden and the band met up in the late summer of 1989 at London Bridge in Los Angeles to track the record. At the time, Ritual de lo habitual had yet to come out, but Jerden’s engineer Ronnie Champagne had a cassette of unfinished mixes — the history of the two albums forever intermingled by this tape. Apparently bassist Mike Starr made copies and gave them to friends.

“That’s all they talked about when we first got there,” Champagne told Alice in Chains biographer David De Sola. “They devoured that record. So while we were making Facelift, their minds were expanding, because they’re starting to listen to this record that hasn’t been released yet, and Ritual was a big sonicscape record.”

“What I noticed was that Dave Jerden slowed their tempos down, which made it sound heavier,” Hillis further remarked in Everybody Loves Our Town. This is most evident on slow burners like “Love, Hate, Love”, a song that would become the template for murkier territories on future Alice in Chains albums. The biggest holdover from the band’s pre-Jerden years is Jerry Cantrell’s riff-centric songcraft — far more rooted in metal than punk-influenced Seattle contemporaries like Nirvana or the Melvins, for example. This dichotomy became evident one night when Alice in Chains were filming their private concert scenes for Cameron Crowe’s Singles while Nirvana played a different show across the street, where they would premiere the song “Smells Like Teen Spirit”.

When MTV picked the music video for “Man in the Box” for its illustrious Buzz Bin in early 1991, putting the video into heavy rotation, sales for Facelift surged. It also signaled a shift in tone for MTV, which apparently selected AIC over a late-era hair metal video. The video for “Man in the Box” was bleak by comparison — browns, greys, blacks — but it was different (the video for “Smells Like Teen Spirit” shared a similar overcast color palette). Musically, “Man in the Box” was heavy, but also melodic. Yet it wasn’t quite metal, either. Layne Staley’s powerful voice, underlined by Cantrell’s sweetly sung harmonies, created a delightful contrast — a mixing technique initially discovered during the demo process and credited to Parashar. It would become a signature element of Alice in Chains’ sound.

“The ‘Man in the Box’ video definitely reflected a certain intensity,” former Columbia Records A&R rep Nick Terzo explained in Everybody Loves Our Town. “There was a man with eyes sewn shut in it. On radio, they had plenty of problems with the song. That lyric, ‘Jesus Christ, deny your maker,’ caused a lot of stations to drop the song once they got into the lyrics. … It was an anomaly, ’cause no one really knew how to deal with this music, or what it was. No one knew what grunge was then.”

August 21st, 1990 can only have felt like a day of supreme accomplishment for Jerden and the two bands. While, Facelift slowly worked its way into the cultural consciousness, Jane’s Addiction immediately capitalized on years of hype and buildup. Ritual, the band’s second album for Warner Bros., was well promoted and peaked at No. 19 on the Billboard album chart. Farrell would then concoct his traveling Lollapalooza festival, championing “alternative rock” and its many off-shoots, the inaugural trek kicking off in 1991 as a Jane’s Addiction farewell tour and ballooning from there.

Ritual de lo habitual and Facelift caused a domino effect that culminated in the explosion of similar-minded rock bands the world over, as Pearl Jam’s Ten, Nirvana’s Nevermind, and Red Hot Chili Peppers’ Blood Sugar Sex Magik would come a year later. With the scene came a new generation of artists and listeners seeking something more honest and visceral in pop music — things taken for granted in today’s hyper transparent post-internet culture. Jane’s Addiction and Alice in Chains both laid bare feelings and thoughts that were direct and relatable to their fans. It’s bizarre that Ritual de lo habitual and Facelift came out on the same day. Yet, it’s strangely fitting, given their combined impact on the shape of heavy music over the next decade and beyond.