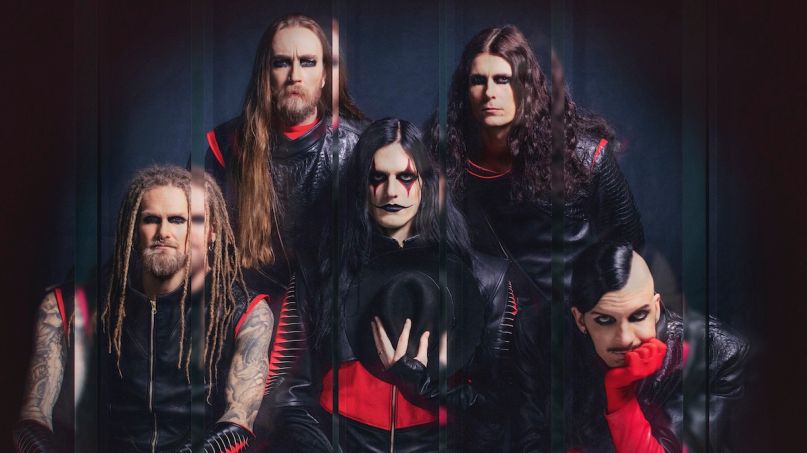 Even when the world is turned upside down, we can count on Avatar to churn out an opus of groovy, melodic metal that sings and soars.

That’s just what you’ll find on the Swedish metal band’s eighth studio album, Hunter Gatherer, due out Friday, August 7th. Spearheaded by lead single “Silence in the Age of Apes”, Hunter Gatherer is one of Avatar’s heaviest albums to date, and packs a strong punch in the midst of a global pandemic.


Avatar frontman Johannes Eckerström spoke with Heavy Consequence from his home in Helsinki, Finland, about the new album, Hunter Gatherer, how the new songs are different from Avatar’s previous work, the effect of the COVID-19 pandemic on the band, a musical assist from Slipknot’s Corey Taylor, and more. Read the full interview below.

I live in Helsinki, Finland, but the rest of the band is sill in Sweden, and right now, things seem to be pretty calm, both in Sweden and here, although Sweden has been faring way worse than Finland. Especially certain regions of Sweden around Stockholm. As far as people close to me goes and family, things are fine both here and in Sweden, but yeah, there’s some interesting things going on when you live in one country and have your old home country next to you, and you see how certain things have been handled differently. It’s been a bit troublesome.

On how travel restrictions between countries are impacting the band

Finland has very much restricted Swedes’ ability to enter Finland. The other way around is more open, which is my case, anyway, I’m a Swedish citizen, so I can go to Sweden as much as I want. Finland has opened up to the other Nordic countries and a large part of Europe. But, again, Sweden’s numbers have been quite different, and one of the regions that was hit a bit harder than the rest of the country here in Finland — the capital region was the worst, but the second worst was the northern border with Sweden. In Finland, that [area] had higher numbers than the rest of the country, so they have reason to be hesitant to let Swedes in. It’s weird.

it’s going to take time. It hit me yesterday that it’s been four months now since things took off here, and somehow we made it this far, day by day, and have been able to live some kind of life, and it’s baffling when you think in numbers and stuff that our brains can’t comprehend. Like, what is a year when we think about this? We can’t truly wrap our head around it, and then it gets heavy.

For one reason, because we recorded it now. Every album we create is meant for the time in which is was created. This, right now, is where our thoughts and feelings are in the ballpark of where the album is. Right now, it represents something in particular for us in this time and moment. Avatar Country was released as a surprise, completely. It was out of the blue. We didn’t do any build up towards that release or announcement, because we dropped the a music video as a bomb and took it from there. This time around, we wanted to be working in a situation where we were very open with what was going on, so even if we had wanted to wait, it still would have felt very sh-tty to not [release it] when fans knew that we were in the studio and mixing and then to say, “We’re going to release it next year, because that might be a better strategy to promote and sell tickets.” It didn’t feel fair to the fans or music.

It’s hard to measure heaviness, but if nothing else, it’s the heaviest and darkest and definitely most aggressive album we’ve done in some time, where that really became the focus. it’s a special kind of aggression, because I feel it’s very articulate, whereas if you were to go to our very early days when we were more connected to our roots — and being very into death metal and melodic death metal when the band was formed — and go back to an album like Schlacht that was aggressive but that was a different kind of youthful aggressive album. If we’re talking horror movies, the killer that would have been in Schlacht would have attacked you with a hammer and bashed your face in until you died, very blunt and sophisticated but very brutal and spectacular, but all over the place. But Hunter Gatherer is more focused and a more [like a] Hannibal Lecter murder, someone who knows his way around a scapula and knows how to do the most damage with one stab. That’s a pretty violent analogy! (Laughs)

On how Avatar’s music is changing with age

When you are dealing with anger and darkness in your 30s and want to be honest with it, and whatever angst that you carry with you as an adult compared to a teenager is a different way of dealing with it and articulating it, which makes this album very serious, and in that aspect, every album is an attempt to be as frank and honest as we can be. It’s just that with every album, another layer of the onion is peeled off, so this is another deep level of honestly, as far as I’m concerned. One of the coolest things with doing this and working certain songs on each album is that each song has something in them where I’m like, I wouldn’t have been comfortable to say it like that when I was this age or that age. We have eight layers and albums done, so two more, and we will somehow be complete human beings, I guess.

On the story behind “Wormhole”, the final track on the album

I think we have always like a song that feels epic in one way or another to close out our albums and I think for many bands that’s very true, and for many albums we have listened to growing up. The final battle of a movie, the grand finale — so it usually has an epic tone to it. For “Wormhole,” [guitarist] Tim [Öhrström] came with a riff he had on a MP3 file, and I think it was called “Moped Death,” as in death metal, because he perceived it was something that sounded like a death metal riff but at the same time sounded like a moped engine. To me, one of the vibes that I got that made it so special is that the sound… if I’m sick and wake up in the middle of the night and run into the bathroom and puke, that’s the noise it makes! Therefore, we were struggling a lot with the song, because it’s so peculiar, that riff, and we knew there’s a lot of tension, so we wanted to do something with tension and release to balance out this one with something melodic.

We needed something as a counter weight for that riff, and that is really hard, because there are a lot of songs and bands that work with heavy contrasts, and almost no bands do it really well. There are some that are somehow masters at the craft, like Opeth, but it’s a tough challenge, so we struggle with it, and for a while, it didn’t look like we were going to make it with that song. It was actually the day Corey Taylor and his wife came to hang out in the studio at the end where we were basically like, “Hey, you don’t have to … no strings, but here’s an MP3, if you have any thoughts, because we’re stuck with it.”

We had the chorus, we had all the parts, and even more parts than we ended up using. But we weren’t able to complete it, and the morning after, Jay [Ruston], our producer, had received a voicemail where Corey hummed the melody that was what we used for the pre-chorus. So, from that little snippet that he provided, we started to jam and arrange and write a part and suddenly, everything else fell into place with the sound, and we got that counter weight.

On the status of concerts for Avatar this year

Now is not the time. We canceled everything that was going to happen this fall, which of course sucks, but I’m sitting here complaining about it while not being sick and with people around me not being sick, so we have to learn to accept that, and most people don’t get to tour anywhere, so I’m trying to not let it bring me down too much. We’re waiting until next year, and we aren’t exactly sure when. It would suck to have one of those false starts where you book something and have to cancel it again because we haven’t tackled all the issues yet, so right now, we haven’t had a formal meeting about it for a couple of weeks. We’re doing lots of Zoom now, but we haven’t had a formal meeting about it in a while. Everybody hopes for spring, but we don’t feel like we’re be ready now to commit to the idea to go in really early next year. It’s so hard, because at some point, you have to pull the trigger and decide something or else someone else will. We have to make some kind of decision soon, but it will be a gamble.

In terms of how we work, it finally pushed us over the edge to where we started to try to be more understanding of what stuff we are comfortable doing and we feel is relevant for the band through social media.  And to find things we can do to entertain that’s not in poor taste and not trying to capitalize on this in some dishonest way, but try to make an honest living as a touring musician, when you’re forbidden to tour.

Many bands are doing live-stream shows, and the only one I saw that I enjoyed for real was Devin Townsend, just by himself with just a backing track at his home, and that was pretty nice because it was down-to-earth and works with how he is and the stuff he does and how he does things. And there was a sense of connection there. We express ourselves very theatrically, and we’re very dependent on connecting with people in the room. To me, it’s not a concert unless my face is buried in another man’s smelly armpit! You want to see the steam coming off people’s shoulders and smell the beer. There’s a visceral and physical thing that has to happen that you can’t do in such a sterile, synthetic setting. Am I supposed to point to the camera and pretend there are people there? It just doesn’t work with what we do.

Our thanks to Avatar’s Johannes Eckerström for taking the time to chat with us. Pick up Avatar’s new album, Hunter Gatherer, here.