Bette Midler Goes After Melania Trump: “Get That Illegal Alien Off the Stage” 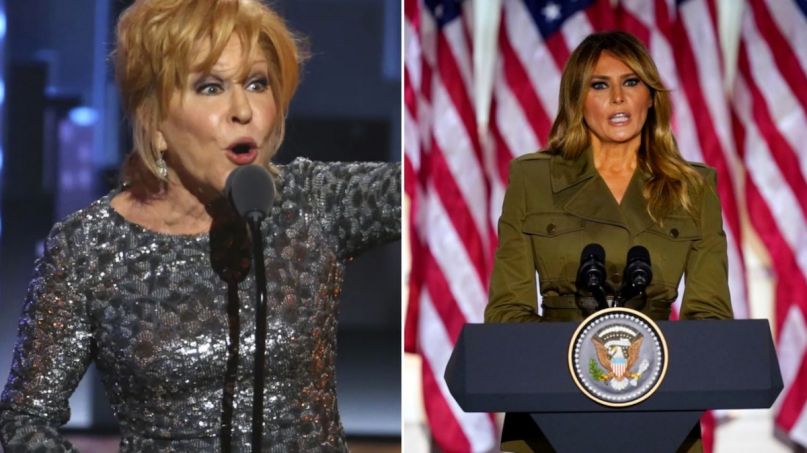 As to be expected, the Republican National Convention this week has been nothing but a dumpster fire filled with blatant lies and outlandish behavior possibly fueled by cocaine. There’s been plenty to pick apart and dismiss, but Bette Midler might have gone too far with her criticism.

Last night, the actress and performer took to Twitter to skewer Melania Trump’s RNC keynote address. Rather than focus on the substance of her speech, though, Midler simply spouted racist and xenophobic comments.

“#beBest is back! A UGE bore! She can speak several words in a few languages,” Midler wrote. “Get that illegal alien off the stage!” The 74-year-old actress/singer later tweeted, “Oh, God. She still can’t speak English.”

#beBest is back! A UGE bore! She can speak several words in a few languages. Get that illegal alien off the stage!

Midler’s issue with the First Lady appears to be related to chain migration, a form of immigration based on family connections (i.e. when a US citizen petitions for a non-citizen relative to join them in America). Donald Trump has long wanted to end chain migration, despite the fact that his own wife and her Slovenian family  have directly benefitted from it.

In 2018, Melania’s parents were granted US citizenship through chain migration. In a tweet at the time, Midler remarked, “What timing! Can you believe #Trump has the gall to criticize others for doing what the #MelaniaTrump family did today???”

What timing! Can you believe #Trump has the gall to criticize others for doing what the #MelaniaTrump family did today??? Parents Become U.S. Citizens, Using ‘Chain Migration’ Trump Hates via @NYTimes https://t.co/M36kKKFF4k

It’s one thing to oppose Trump’s inhumane anti-immigration policies and hypocritical ways, but to attack him and the First Lady using his same xenophobic language? Two wrongs don’t make a right. You can do better than that, Bette.

Most of the internet seemed to think so, too, as the backlash against Midler was immediate. Political commentators left and right roasted Midler for her remarks, including Piers Morgan. When someone like Morgan — who has infamously had many very bad takes — comes after you, you know you really must have fucked up.