"For anyone who wants to get into music as a full-time career, make sure you're doing it for the love of it" 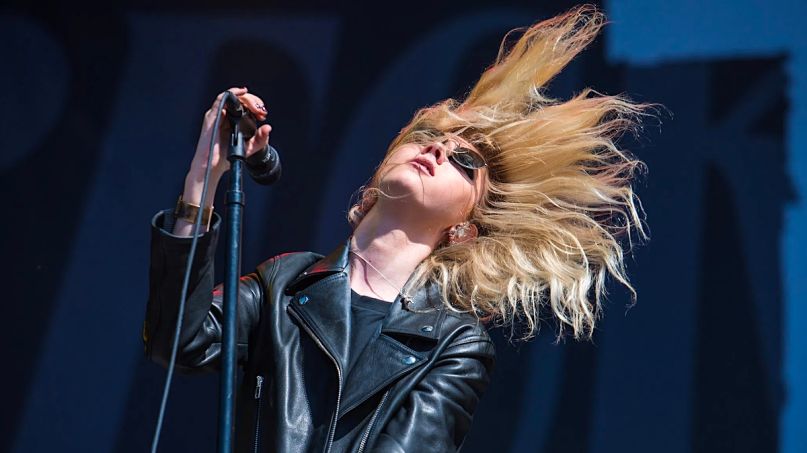 Beyond the Boys’ Club is a monthly column from journalist and radio host Anne Erickson, focusing on women in the heavy music genres, as they offer their perspectives on the music industry and discuss their personal experiences. This month’s piece features an interview with singer Taylor Momsen of The Pretty Reckless.

Scoring a No. 1 hit at rock radio is no small task, but Taylor Momsen and The Pretty Reckless have done it multiple times. The band’s latest single, “Death by Rock and Roll,” is a towering yet raw rock anthem, which skyrocketed to the top spot on the Mainstream Rock chart in a matter of weeks. The song follows The Pretty Reckless’ previous No. 1 hits, “Heaven Knows”, “Messed Up World”, “Follow Me Down”, and “Take Me Down”.

The Pretty Reckless were set to release a new album, also titled Death by Rock and Roll, this year, but now plan to unveil the LP in 2021, when they can hopefully tour in support of the release. The album is set to feature some A-list guests, including Soundgarden guitarist Kim Thayil; Pearl Jam / Soundgarden drummer Matt Cameron; and Rage Against the Machine’s Tom Morello.

Momsen recently spoke with Heavy Consequence for the latest “Beyond the Boys’ Club” column. She discussed the upcoming album, the very personal meaning behind “Death by Rock and Roll”, her experience as a woman in the rock scene, and more. Read the full interview below.

It’s the title track and the first song the album, so I think it’s cool to introduce the audience to the record in the order of the track listing, at least with the first song. I think that’s a cool thing, if you’re able to do it. “Death by Rock and Roll” was the song that gave me direction on this album. It was a song that was 10 years in the making, and it came back as a demo we had from a long time ago, and came back around after our producer Kato (Khandwala) passed away. That line in the song seemed very relevant again. It’s a line he used to say all the time. So, we revisited it and finished writing it, and here it is.

On “Death by Rock and Roll” being a tribute to the band’s late producer, Kato Khandwala

The beginning of the song starts with his footsteps walking down the hallway of the studio, so it’s very much a tribute to him from front to back. We wanted to make an anthem for rock ‘n’ roll, and even though it’s called “Death by Rock and Roll”, it’s saying the opposite. It’s saying to live life your own way, go out your own way and don’t let anyone tell you different. That’s how he lived his life, and it’s how we we live our lives. Rock ‘n’ roll is more than music to us. It’s a lifestyle, and you live and breathe it. So, what better way to remember him and keep his memory alive than with music?

Oh, man, if I knew, life would be so much easier! (Laughs) I have no idea. It’s a lot of work on a lot of people’s parts. When I’m writing music, I don’t think about the outside world. I’m doing it so much for myself, that by the time I finish my album and realize it’s going to come out into the world, it’s a whole mind trip that people are going to hear this. It’s always a bit nerve-racking to release new music. That was especially true this time, with the quarantine and chaos going on in the world. We didn’t know what to expect. You never do, but this time was unprecedented times, and to not be able to tour and support your music is kind of insane. So, to see this overwhelmingly positive response is the best thing you can ask. You put your heart and soul into it and put it out into the world and hope people like it.

On the updated plan for releasing the new Pretty Reckless album

Next year is what it’s looking like, but we don’t know right now. Everything is up in the air because we’re playing everything by ear, like a lot of people are, because we don’t know what’s going on. It’s very bizarre to put out music and not be able to play. It feels wrong. It feels like the circle is not complete. It’s a very bizarre thing to say that we have a No. 1 rock song, and we’ve never played it in front of a live audience yet. So, we’re thinking of waiting for the full album until we can start playing some shows again. There’s going to be more singles before then, so this is the first little taste, but the record is finished. It’s complete, and we’re just finishing up the album art and packaging.

It’s always a tricky decision. There’s no clear cut right or wrong answer when it comes to releasing anything. We talked about holding the single, just because we didn’t know what was happening. But, when it came down to it, we can’t sit on this music forever. Everyone is going through such a hard time right now, and music is my salvation — it’s what brings light to my day and has saved my life time and time again. So, if I make something and can put it out, maybe it will bring a smile to someone’s face, so why not do that?

I’ve heard lots of different rumors, and none of them are positive. I’ve heard as far as 2022, which is insane to me, so I’m hoping that’s not true. You don’t feel like a band if you’re not playing, so hopefully sooner than that, but I’ve been figuring out the quarantine video from home thing, which has its place, but it’s not the same as the live show. We’re going to start rehearsing again soon, masks and all, so we’ll feel a little normal. I’m trying to see the positive side of this right now. If someone is deprived of something for a long time, you just want it so much more. So, live shows are the same thing. We want to play them, and fans want to go to them, so … when they come back, they’re just going to explode.

I think it’s going to be different, at least in the beginning. I think there are going to be different safety protocols that need to be in place, because they have to be safe. I don’t want to put my fans at risk, and I don’t want to be at risk, so we’re not going to play shows until there are protocols in place and we know everything is okay. We had some of the best touring of our career lined up. We were playing all the festivals and going out with Guns N’ Roses and Pearl Jam and Foo Fighters. It was pretty insane, and now that’s on pause. At least from what I’ve heard, nothing is canceled, and everything is just getting pushed, so we’re just hitting a giant pause button.

Supporting a band is just sticking by them through the ups and downs. Supporting a band can be as simple as tweeting your support, listening to their music on streaming services and continuing to support them even in times of trouble. When shows come back, come see us! There’s merch, but not everyone has money to do that, so just listen to the music. That’s why we make music — to have people hear it. If you’re listening, we’re happy. That’s the real meat. Shows are fun and amazing, but a record is forever. A show is for a night, so listen to the music.

I think there are more women pursuing the genre than there were when we started, which I think is great. I like to see anyone who wants to pursue any of their dreams go for it. I tend to not segregate or look at music or art from a male and female perspective, simply because I see it as we’re all doing the same thing. My idols are men, and its not a sexist thing — it doesn’t enter my brain that John Lennon or Chris Cornell are men. Those are the people I grew up listening to. A good song is a good song, and hopefully that will be the thing to rise to the top.

I think I came from a different side then, because I was coming from acting, and I had a lot of resistance from that side of things, of “actors can’t be musicians,” which I thought was crazy, because to me, I was never an actor. I was a musician with a day job. I was dealing with that. I think now that I’ve gotten older, I’m starting to notice more — everyone was always telling me there was misogyny in rock, and I would go, “I don’t know what you’re talking about.” Now, I see more of what everyone has been telling me for the past 10 years. There is a bit of a boys’ club and stigma to women in rock, but my voice hasn’t changed. Plus, there will always be people who don’t like you for whatever reason, and being a woman is one of the things along that list of many.

I’m so bad at advice, because I’m not one to take advice! (Laughs) I’d prefer to make my own mistakes and hopefully learn from them, and I figure things out as I go. I think for anyone who wants to get into music as a full-time career, make sure you’re doing it for the love of it. It has to be something you need deep down in your soul in a way that you’re not complete without it, because it’s a very tough industry. It comes with rejection, and it’s not what everyone sees. So, if you’re doing it for the right reasons, and music is what makes you happy, go for it.