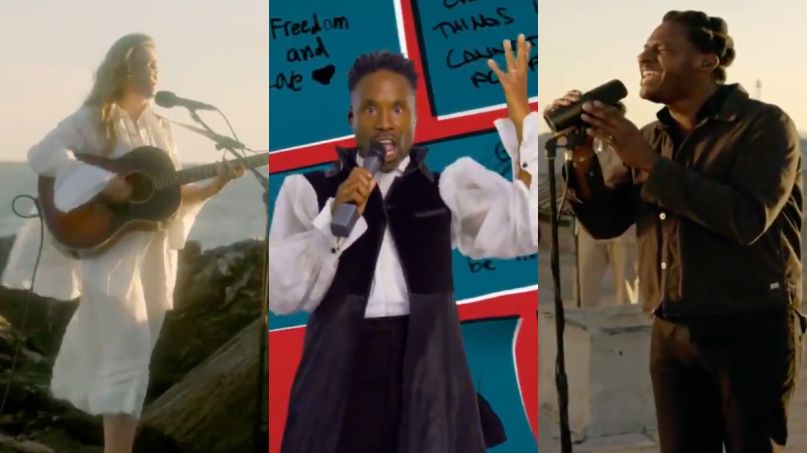 Michelle Obama’s powerful speech during the first night of the 2020 Democratic National Convention undoubtedly stole the show. However, there were some other bright spots from supporters of Democratic presidential nominee Joe Biden, namely musical performances from Maggie Rogers, Leon Bridges, and Billy Porter with Steven Stills.

Bridges came first, delivering a soulful rendition of his summer single “Sweeter”. Joined on a sun-set city rooftop by Terrace Martin, Joshua Crumbly, Paul Cornish, and Trevor Lawrence, the soul artist sang out  for racial justice with lines like, “My sisters and my brothers sing, sing over me/ And I wish I had another day.”

Next up was Rogers, performing on the Maine coast after an introduction from that state’s Democratic nominee for Senate, Sara Gideon. Her acoustic rendition of “Back in My Body” off last year’s  Heard It in a Past Life was accompanied by photos of masked essential workers and everyday folk demonstrating the care and respect for one another so desperately needed in the era of COVID-19.

Finally, Porter was joined by Stills for his cover of Buffalo Springfield’s iconic protest song “For What It’s Worth”. His electro-soul version released back in April was given a touch of classic rock thanks to the original’s guitarist and his trademark bends. Sure, the very made-for-YouTube video was a bit, um, extra, but should we ever expect anything less from a great like Porter? Besides, hearing him sing “A thousand people in the street/ Singing songs and carrying signs,” while a Black Lives Manner banner rose above him highlighted how relevant the 1966 track is today.

Watch all the performances below. The next three days of the DNC will feature musical performances from Billie Eilish, The Chicks, John Legend, Jennifer Hudson, Prince Royce, and Common. For more music to vote to, check out Barack Obama’s summer 2020 playlist.

For resources on how to register to vote in your state, head here.

Thanks to my brothers @terracemartin, @joshua_crumbly, Paul Cornish and Trevor Lawrence for working with me on this performance. Make sure you register to vote: https://t.co/dpF5I7beXg pic.twitter.com/8XqdF8lQeS

Thanks @theebillyporter + Steven Stills for helping us close night one of the #DemConvention! 🎵

So much more to come! Come back tomorrow ⬇️https://t.co/NEJtNqxFPV pic.twitter.com/vqXfLCUVfk

Editor’s Note: Stay safe while casting your ballot by picking up one of our custom face masks, such as the new Bolt Mask or popular Caretaker Mask below. Proceeds will benefit MusiCares’ COVID-19 Artist Relief fund supporting independent musicians, as well as Consequence of Sound, an independent media company.