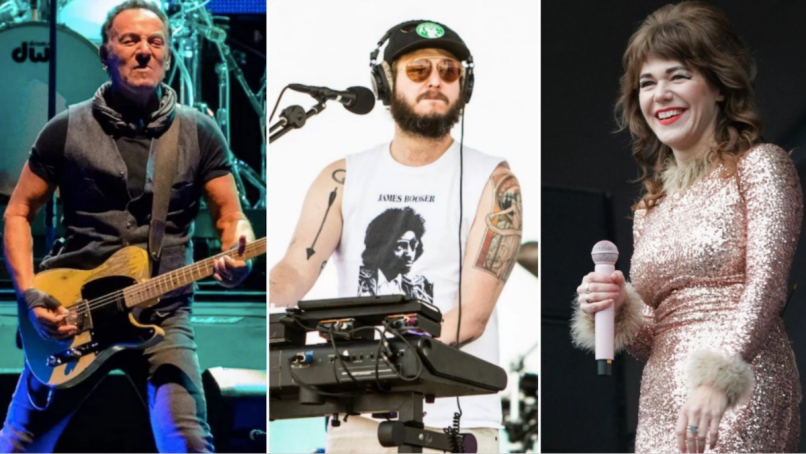 Less than two weeks ago, Taylor Swift embarked on a sonic retreat into the chilly forests on folklore, an album that didn’t just feature Bon Iver on “exile”, but owed him such a musical debt that many jokingly called the record For Taylor, Forever Ago. With the eyes of the world now on Justin Vernon, it’s the perfect time to release his new song “AUATC” (short for “Ate Up All Their Cake”).

“AUATC” has a guest list starry enough to make T-Swift blush. It was co-written by Phil Cook of Megafaun, and features vocals from Bruce Springsteen (!), Jenny Lewis, Elsa Jensen of rivulare, and Jenn Wasner of Wye Oak.

The song begins with a chipmunk-soul topline that quickly gathers force into a towering group chorus. Its accompanying music video was directed by Aaron Anderson and Eric Timothy Carlson, and features a man in a protective mask dancing through idyllic city streets. Watch it below.

To accompany the track, Bon Iver has outlined a number of organizations and initiatives, “encouraging fans to come together and take action, in an effort to fight capitalism and create a world best suited for everyone.” Those groups include the Minneapolis Sanctuary Movement; Red Letter Grant; Equal Justice Initiative; NIVA; and 350.org.

“AUATC” is billed as “Episode 2” of “Bon Iver: Season Five”. Back in April, Bon Iver released the charity single “PDLIF, which was billed as “Episode 1”. Vernon also premiered a new song called “Things Behind Things Behind Things” during a virtual Bernie Sanders rally. Meanwhile, alongside The National’s Aaron Dessner, Vernon’s side project Big Red Machine recently contributed to Michael Stipe’s “No Time for Love Like Now”.