The title track from the GRAMMY-winning duo's upcoming debut album 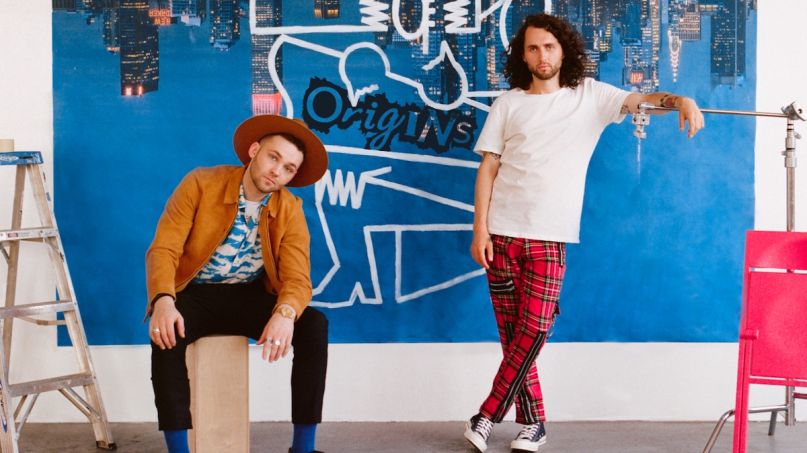 In our new music feature Origins, we asks artists to take a moment to reflect on the backstory of their latest single. Today, Brasstracks tell us how they cashed their “Golden Ticket” with Common and Masego.

Rising from their jazz school backgrounds, Brasstracks have already accomplished more than most duos made of just horns and drums could dream of. Mark Ronson essentially has them on speed dial, they’ve got some GRAMMY shine thanks to their work on Chance the Rapper’s “No Problem”, and they’ve collaborated with everyone from Wyclef Jean to Anderson .Paak. Oh, and they only formed six years ago.

But now Ivan Jackson and Conor Rayne are really ready to grab the spotlight with their debut album, Golden Ticket. Due out August 21st, the full-length follows their 2019 EP Before We Go and adds to their growing list of collaborators. Robert Glasper, Tank of Tank & The Bangas, Col3trane, and more make appearances on the LP. Perhaps no song on the effort better highlights Brasstracks’ knack for letting their guests shine than the title track, which features Common and Masego.

Rolling by like the calming ripples of a clear pool, the track bops with a jazzy hip-hop swagger. It’s cool and collected, giving Masego ample space to lay down his melodic lines and providing Common a brassy bed to drop his eternally smooth bars. While the vocalists fit Rayne’s groove like a glove, it’s Jackson’s horns, alternatively sputtering and blaring, that grab your attention during the breaks.

Take a listen below, followed by Brasstracks’ Origins breakdown of “Golden Ticket”.

We were lucky enough to participate in some sessions with Mark Ronson in the making of his most recent album, Late Night Feelings. A lot of those sessions were at one of the most legendary studios in existence, Electric Lady in NYC. Watching it all come together was amazing, and had a huge influence on how we wanted to do our first album. First and foremost – the sessions were genuinely fun and light hearted, but everyone in the room was on the same page in how serious we were about trying to make some timeless music. Secondly, Mark brought in some of the best of the best. We met a lot of great writers and musicians through him, and we got to thinking… lets call more friends and collaborators for this album, in all senses. So we did. Great decision.

The various legendary studios we recorded in (after being turned down by Electric Lady numerous times):

So, after a few sessions at Electric Lady, obviously we tried to book it for ourselves. It felt new and special when we were there. We even tried to hire Mark’s engineer Ricky Damian to help us out (he is a genius). We tried for what felt like a few months, and we ended up giving up in the end. They were just too busy and too in demand, and it was starting to feel like a place that wouldn’t ever be a home base for us. We quickly realized we already had a home base — Flux Studios, where we had already done previous work for and with so many people (we started going there very frequently after we recorded the choir vocals for Chance the Rapper’s “No Problem” there). After all, it’s also often the home of André 3000, Frank Ocean, and way too many more to count. The engineers are absolutely top notch, and our close friends. And as I’m typing this, I’m realizing that was a theme through this whole album — sticking with what we know and love.

To get that “new and special” feeling that we were originally looking for, we got out of NYC. We booked the same room at East West in LA that they recorded Pet Sounds in. We flew to London and booked a studio on recommendation from Ricky Damian — Assault and Battery studios. Just so happened that they had the same recording console that was used on “We Will Rock You”. Legendary.

The concept of being “Here Today, Gone Tomorrow”:

We were having a conversation while shopping for outfits for a late night show we were doing with Mark Ronson, I forget exactly which one. We were talking about current “hits”, specific songs that felt like absolute classic smashes, that were only being talked about and circulated for what felt like a week. Even songs we had worked on ourselves. If the highest echelons of the music industry are putting out records backed by crazy press campaigns that cost thousands of dollars, only for them to be gone in a few weeks at best… what’s the point of us giving that a shot? Trying to write these “smash hits” We’ll be Here Today, Gone Tomorrow…. and that was the first title of the album. We changed it because it felt a little dark, but to us it was actually a great realization. We were able to lean into only the music that was most authentic to us after that. No more chasing hits.

When we were at jazz school, we were a bit rebellious, specifically about the schools curriculum. We bonded over that, and made the opposite music of what our professors probably wanted us to make. The boundaries and red tape that was imposed led us to make some of the coolest music ever to us, at the time. Five or six years later, the boundaries are different. We’re not being pushed to make our songs organic, we’re being pushed to write a hit. That one song that does “that one thing”. We’re not holding that against anyone at all, we get it. But we searched for that for a WHILE, frustratingly so. Eventually, we were over it, and that definitely led to this album.