Cardi B Has Spoken with Joe Biden: “He Understands the People’s Pain”

She told him, "This is what we want. Please make it happen." 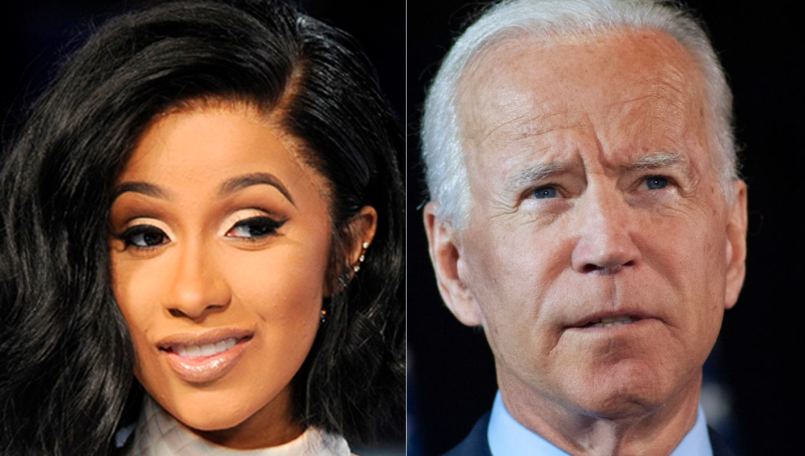 Cardi B and Joe Biden

Longtime Bernie Sanders supporter Cardi B has revealed she’s spoken with Joe Biden. On Friday, the “WAP” rapper sat down for an interview with The Breakfast Club in which she discussed the Democratic presidential nominee, the upcoming election, and the urgent need to vote (via iHeartRadio).

The subject came up when one of the radio hosts asked Cardi B how she felt about being “stuck with Biden” after Sanders dropped out of the race. “I’m salty but I’m okay,” she said. “I spoke to Joe Biden.” As soon as the words left her mouth, she clammed up, as if she wasn’t supposed to say that. After some egging to continue, though, the Invasion of Privacy star started to explain her stance.

“What I’m saying is that I know him,” she continued. “I always felt like Biden balanced Obama because I thought he was conservative and that’s what swayed the conservative votes, the ones in the middle. Knowing him and everything, I think he’s getting it and I think he understands the people’s pain. He’s getting what we want. People think we want so much, but we want really simple things if you really think about it.”

Apparently Cardi B tried to explain to the former vice president that he should listen to the people’s demands, especially because polling shows that two thirds of Americans support Medicare for All. “I tried to let him know like, ‘Listen we don’t want no false promises. We don’t want no fake shit to get people voting. This is what we want. Please make it happen,'” said Cardi.

“I don’t want to hear people say, ‘Oh, now we’re stuck with Joe Biden,'” she continued. “Well, a couple months ago I kept stressing there were a lot of motherfucking candidates. And y’all know what? When I interviewed Bernie and I kept telling people to make sure y’all do your research on these people and vote, and they were like, ‘Shut up, bitch. You don’t speak no English.’ And now you’re mad!”

Elsewhere during the interview, Cardi discussed the importance of Biden choosing a Black woman as his running mate, the need to make sure every American can vote during the pandemic, and why Black women are a good influence on the political climate at large. Watch the full video below.

While Cardi may have the ear of Biden, she also finds herself at odds with politicians on the other side of the political aisle. Yesterday, a Republican congressional candidate tweeted that Cardi and Megan Thee Stallion’s new video for “WAP” is ruining today’s children by encouraging them to stray away from god.