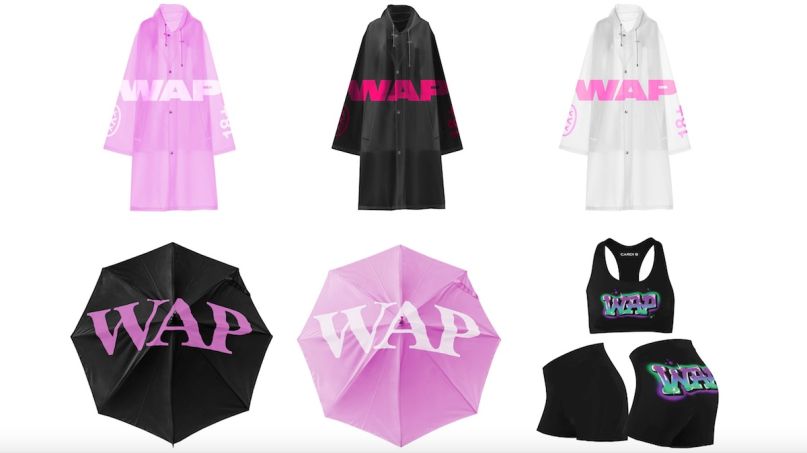 When she isn’t interviewing the Democratic nominee for President or making FOX anchors flip out, Cardi B stays busy by giving fans new songs that will get stuck in their head for months. The latest example of such is “WAP”, her viral collaboration with Megan Thee Stallion that promotes female sexuality in the most over-the-top way. Now, Cardi has released an exclusive line of waterproof “WAP” merch to keep that brand going strong,.

Cardi B has unveiled a new webstore exclusively for “WAP”-themed items called the “Wapstore”. It features a wide array of raincoats, crop tops, sweatpants, umbrellas, sports bras, and biker shorts, each emblazoned with the text “WAP” and, in some cases, the single artwork featuring the rap duo’s hair intertwined. Prices start at $25.

Though some stuffy critics accused the song of selling sex over art and claimed the music video mistreated big cats, “WAP” has quickly become one of the biggest hits of 2020, nabbing the highest streaming debut of the year as well as the highest debut week of any female artist.

Of course, Cardi B has put up with nonstop criticism and abusive insults most of her life, so the latest bitter remarks are simply going in one ear and out the other. In fact, she’s arguably more self-assured now than ever before in herself, her body, and her music. No wonder she’s able to create an OnlyFans account the same week she talks in-depth about politics and motherhood.