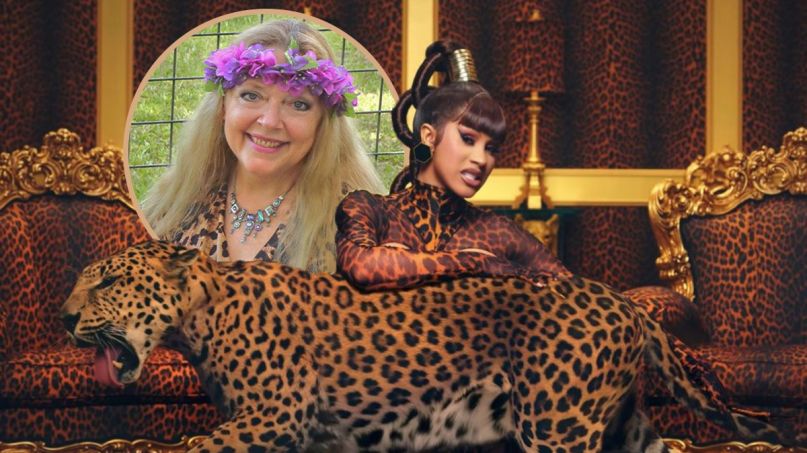 Carole Baskin (photo by Jamie Veronica Murdock), and Cardi B in the "WAP" Video

Cardi B and Megan Thee Stallion’s latest summer smash “WAP” is one of the raunchiest, most explicit, most sexually liberated bangers you’ll ever hear. Some find that worthy of celebration, others see it as a sign of the death of God in America. Tiger King star Carole Baskin has another way to describe the song’s video: animal abuse.

In a statement emailed to multiple publications (including Billboard), the docuseries star and controversial conservationist criticized the “WAP” video not for its glorifying of “wet ass pussy,” but for glamorizing “rich people having tigers as pets.” She said showing the big cats near the rappers “makes every follower of these artists, who doesn’t know better, want to imitate by doing the same.”

According to Baskin, buying into the big cat desire would inevitably feed into the cycle of animal abuse practiced at the nation’s private zoos:

“After tigers are too old for pay to play sessions by people like Joe Exotic, Bhagavan Antle, Marc McCarthy, Mario Tabraue and others, they become a liability instead of an asset. While I think most are destroyed behind closed gates at that point, some end up being given away to people who want to have a tiger to show off. That never works out and the cats either die or end up dumped in sanctuaries or, worse yet, breeding mills. Either way, it’s always abusive to the cat.”

While Baskin was relieved to learn Cardi B and Hot Girl Meg didn’t appear to actually share space with the animals, she still wasn’t pleased with the obvious use of green screen. “…You have to pose a wildcat in front of a green screen to get that image and that doesn’t happen in the wild. It can’t happen in sanctuaries like ours where cats have plenty of room to avoid a green screen (or would shred it if offered access and could die from ingesting it),” Baskin wrote. “That tells me they probably dealt with one of the big cat pimps, probably even one of the ones shown in Tiger King, Murder, Mayhem and Madness, who makes a living from beating, shocking and starving cats to make them stand on cue in front of a green screen in a studio. That’s never good for the cat.”

TMZ reached out to Cardi and the video director, though neither has yet to comment on Baskin’s concerns.

Baskin isn’t just looking out for the “WAP” cats; she was recently granted ownership of Joe Exotic’s Oklahoma zoo in a $1 million legal settlement. Meanwhile, the hit Netflix series was nominated for Outstanding Documentary or Nonfiction Series at the 2020 Emmys.