Chadwick Boseman Made a Career of Playing Strong Black Men

From Jackie Robinson to Black Panther, the late actor built his legacy embodying other great men 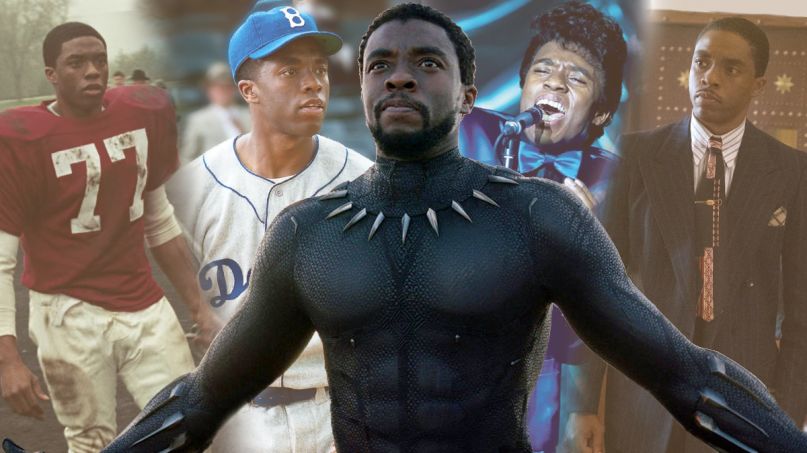 The Roles of Chardwick Boseman

For four years, Chadwick Boseman battled colon cancer in private. No one outside of his very tight, supportive circle knew of his diagnosis. To the rest of the world, he was a supremely talented actor on the rise, delivering an instantly iconic performance as a superhero, embodying a future Supreme Court Justice with due dignity, and illuminating the experience of war. He was known for playing strong characters on the big screen, and we only saw a hint of how truly strong he was in his own life.

Yet this was Boseman’s way — “to be young, gifted, and Black.” His talent came with a graceful understanding of the culture he was representing in his roles, no doubt emboldened by his experience with life’s mortal mutability. Whether he decided to maintain privacy about his illness for personal peace or to keep the focus on his work, the end result is the same. We remember him for those powerful performances — in retrospect even more inspirational given his untimely passing.

Boseman made a career out of playing strong Black men, the whole time quietly building a legacy worthy of standing alongside them. He became famous for depicting men who changed the world, himself furthering change as he went.

When a beloved actor passes, it’s customary to revisit the roles they left behind. With Boseman, it’s more than simply remembering the great characters he gave us. It’s honoring the life he led and the person he was off screen. It’s acknowledging the connection he made to the characters, and how he extended that bridge to audiences. The choices he made in taking these parts and the passion he put into portraying them is why he’ll long be remembered as One of the Greats, gone too soon.

Chadwick Boseman in The Express: The Ernie Davis Story (Universal)

Boseman’s first role in a major cinematic project was a small one. He was coming off a recurring role as Reggie Porter in All My Children and a handful of typical up-and-comer parts in shows like Law & Order and CSI: NY. Rob Brown, meanwhile, was eight years removed from his breakout performance in Finding Forrester when he won the role of Ernie Davis, the first Black football player to win the Heisman Trophy. Boseman was cast as future NFL Hall of Famer Floyd Little.

Now, Boseman’s character is only involved in two scenes with maybe three minutes of screen time. He delivered with a bright charm and measured intelligence, just hints at a career ahead. Still, there’s something very emblematic about him taking on the part of Little, certainly with hindsight.

Little is a high school halfback whom Davis is charged with convincing to go to his Syracuse alma mater. He’s smart, gifted, driven — but cocky and unworldly. It’s Davis’ task to explain to him the reality of a Black man being great at a white man’s sport, and how to overcome those obstacles, he couldn’t just be as good as the first Black Heisman winner. “You’re gonna have to do better than that,” Davis tells Little.

It’s a legacy-passing moment, where the main character sets the stage for his successor to do even more than he had. It presents a young man with a new cultural reality, one where he shouldn’t “set out to be the best Negro running back,” but “the best running back… period.” Similarly, Boseman would spend the rest of his career taking on parts that encouraged others to be more than their labels, to be the best that’s in all of us.

It was five years after The Express that Boseman booked his breakout role in 42. Portraying one of sports’ most illustrious and influential figures would be any actor’s dream, but while such a role comes with expected pressures, there’s a different level when it’s Jackie Robinson.

Everyone knows the story of the man who broke the color barrier in Major League Baseball. Even if you’d never actually heard or learned all the details, you could envision it: the abuse, the aggressive play by opposing players, the inability to stay at his teammates’ hotel. The character of the man fated to face all that had to be something powerful. He had to have “the guts not to fight back.”

Now imagine channeling that — for entertainment. That’s some of the most demanding work an actor can do. Perhaps more so than any of the other biographical features on this list, 42 challenged Boseman to “submerge himself to serve something greater.” It required finding the strength to reel himself in, to keep just rage prickling beneath the skin.

By succeeding at that, Boseman created one of the most poignant sports movies of all time. Though it’s not a “perfect” film, Boseman’s manifestation of Robinson is so sturdy in respecting what the ballplayer endured that it becomes something wholly inspirational in its own right.

Historic Connections: Because of the pandemic, the MLB this year moved its annual Jackie Robinson Day from April 15th (the day he first took the field as a Dodger) to August 28th (the day he was told he would be going to the Majors).

Just one year after playing a sports icon, Boseman took on the role of a musical legend: James Brown. Although Get on Up doesn’t hold the cultural esteem of many other music biopics, its critical reception puts it ahead of films like Selena and Bohemian Rhapsody.

There’s plenty of reason for that. The nonlinear storytelling makes for an engaging watch, while the fourth-wall breaking adds a level of fun and intimacy to the Godfather of Soul. At the same time, it chooses to highlight some of the rougher sides of Brown’s persona, while obscuring elements of his social activism. It becomes, then, more honed in on the internal journey of the man behind the Funk — and that’s why Boseman shines.

Brown was the sort of performer that an actor could easily slip into parody. Boseman, as ever, was more careful with his approach to the man. He found his voice, found his mannerisms, unlocked what about his personality made him a pioneer, and lived it. By making him realer than real, Boseman delivered an electric portrayal of the flawed genius, which kept the character’s complicated drive something to champion.

“See, I can’t never quit when it get hard. You quit, you’re going backwards. You going backwards, your dead,” Boseman’s Brown says after ceding a stage to The Rolling Stones. “No, I take it. And I take it, and I flip it. I goes forward. I live.” You root for a man like that, faults and all.

Historic Connections: The Next Step, Brown’s final studio album, was released 18 years ago — on August 27th.

By the time Boseman played the future Supreme Court Justice Thurgood Marshall, he’d already taken the world by storm as a comic book superhero. What he didn’t get to deliver in the Marvel Cinematic Universe, however, was an origin story. His turn in Marshall gave him that story.

You might think that a movie about the first Black member of the SCOTUS would be about him becoming a Justice; instead, we get something focused on a single case tried by Marshall, the NAACP lawyer. It’s a courtroom drama and a buddy comedy all wrapped up in historical nonfiction, intended to showcase a good man undertaking the fight for justice.

One could fairly dissect whether or not such a perspective does justice to the actual man of the film’s title. Not up for debate, however, is Boseman’s portrait of him. His Marshall is confident in his mission, stoically standing above his doubters as he states the promise of American equality “has not been realized, not even close.” Even when the situation calls for restraint, the fervor behind Boseman’s performance is palpable.

“The only way to get through a bigot’s door is to break it down,” Boseman’s Marshall says in the film. Yet like with so many of the parts he played, this door isn’t shattered by violent force, but rather determination, intelligence, and knowing — knowing — what is right. It takes powerful leaders like Marshall to show us that in reality, and powerful actors like Boseman to embody them on screen.

Historic Connections: Marshall was sworn in as the first Black Associate Justice of the Supreme Court of the United States on August 30th, 1967.

Obviously there are some glaring differences between this role and those discussed above. Black Panther wasn’t the first time Boseman played King T’Challa in the Marvel Cinematic Universe, and, clearly, it isn’t a biographic picture. No, it’s a grand, billion-dollar-grossing, superhero blockbuster. And it will forever be Boseman’s most beloved character.

Black Panther gave audiences a type of hero they hadn’t seen before: a proud ruler, protective of his people, uncertain of the weight of his new crown, equally reliant on his circle’s counsel as he is his own prowess. He was an unquestionable champion, a man who seemed to breathe virtue with every rise and fall of his chest. The movie embraced all he was, never taking a second to excuse him or box him in.

Like T’Challa, Boseman wore that suit like it was destined for him. With a performance as nuanced as its trappings were ambitious, the actor made this African king feel beautifully real. He knew the first major Black superhero movie in decades came with layers upon layers of significance — from Hollywood to culture to individual boys and girls across the world — and he carried that responsibility with a nobility equal to any of the icons he played before.

It can be difficult to remain that way when the world is watching you — “It is hard for a good man to become king.” Boseman’s turn as Black Panther focused the world’s eyes on him during what was surely the most taxing years of his life, yet he remained a true king to the end. Wakanda forever, indeed.