New Set of Collectible Metallica Statues on the Way

The 8.5-inch statues are limited to 3,000 units for each member of Metallica 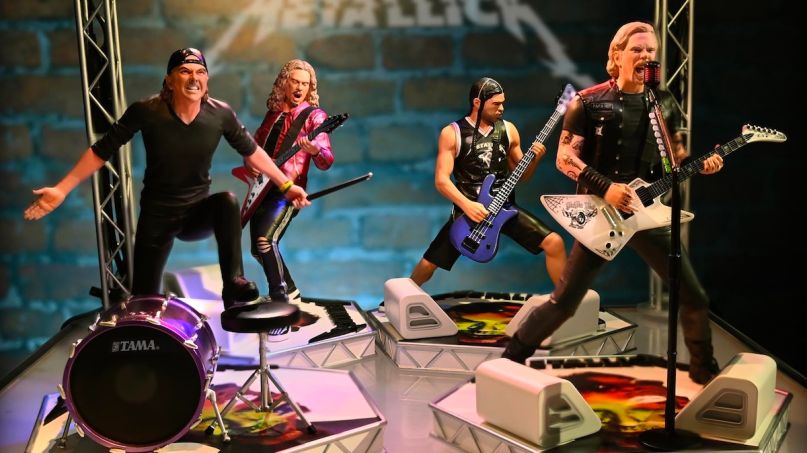 Metallica’s steady journey to immortalization will continue with a set of statues honoring the metal legends. High-end collectible maker KnuckleBonz has announced a new series of Metallica figurines slated for release in early 2021.

The Metallica figures are modeled after the band’s latest look, beginning with their 2016 album Hardwired … To Self-Destruct and including their massively successful “WorldWired Tour” in support of the LP.

Frontman James Hetfield is depicted singing into a microphone with guitar in hand; drummer Lars Ulrich is stepping atop his drum stool as he often does to spur on the crowd; Kirk Hammett is leaning back as he jams his guitar; and Robert Trujillo is in his trademark widespread stance as he plays bass. Facially, the statues look strikingly like their real-life counterparts, although the Kirk Hammett one could use a little more work.

The statues, which each stand approximately 8.5 inches tall, are available for pre-order individually for $149 each, or as a complete set of four at the discounted price of $536.40. Only 3,000 of each figure is being created, with a planned shipment date of January or February of next year.

KnuckleBonz CEO / creative director Tony Simerman hinted that more eras of Metallica will be represented in future statue sets, stating, “We are so pleased and honored to be working with Metallica on these new limited-edition collectibles for our series. We hope to create something that represents every era for Metallica from today back to the advent of thrash.”

Despite the pandemic, there’s been lots of excitement in the Metallica camp lately. The Rock & Roll Hall of Famers recently performed their first (and perhaps only) show of 2020 for a screening that took place at drive-in movie theaters over the weekend. And they released their new live album and concert film, S&M2, this past Friday.

In addition to the Metallica figurines, Knucklebonz is also set to release new statues of Ghost, Black Sabbath’s Tony Iommi, AC/DC’s Bon Scott, Scorpions, and more in the coming months. Those figures are available for pre-order, as well, while a number of the company’s existing statues can be purchased here.