Hear a previously unreleased version of "Sheep Farming in the Falklands" 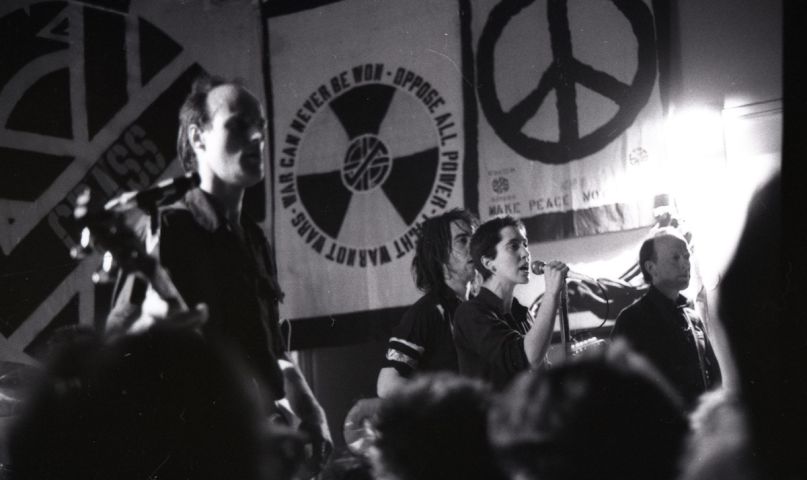 Christmas has come early for fans of anarchist punk group Crass. On October 2nd, One Little Independent Records will reissue all of the English band’s albums as part of a campaign called The Crassical Collection. These reissues will come packaged with previously unreleased bonus tracks, as well as new artwork from longtime associate Gee Vaucher.

Each of the band’s first six albums — that’s Stations of the Crass (1979), Feeding of the Five Thousand (The Second Sitting) (1981), Penis Envy (1981), Christ – The Album (1982), Yes Sir, I Will (1983), and Ten Notes on a Summer’s Day (1986) — will be reissued across two CDs. The first disc will contain the original album remastered by Alex Gordon and Crass founder Penny Rimbaud at Abbey Road Studios, while the second will feature “a mixture of rare and remastered studio recordings.” Fold-out posters and a 60-page booklet of liner notes and lyrics will also be included.

Crass’ seventh and final full-length, a compilation called Best Before 1984 (1986), has been remastered from front to back and also comes with related rarities. Crass memorabilia lovers will also enjoy this reissue’s five fold-out posters and 52-page booklet.

“Number seven – the one that almost got away,” Rimbaud noted in a statement. “This final Crassical Collection double CD contains the original album plus a further album’s worth of related material; good, bad and indifferent. Half the band want it out, while the other half wanted out, but hey, here it is in all its glory.”

As a preview of this sprawling Crassical Collection, the label is sharing a never-before-released version of Best Before 1984 track “Sheep Farming in the Falklands”. Speaking on this iteration of the song, Rimbaud remarked, “A previously unreleased version of ‘Sheep Farming in the Falklands’ written and produced sometime after hostilities had ceased. The first listener to send us the lyrics in full will be handsomely rewarded. I’ve tried, but despite having written them, I still can’t get it word for word.”

Find that unearthed track below, followed by all the pre-order links for each Crass reissue.

Stations of the Crass here.

Feeding of the Five Thousand (The Second Sitting) here.

Yes Sir, I Will here.