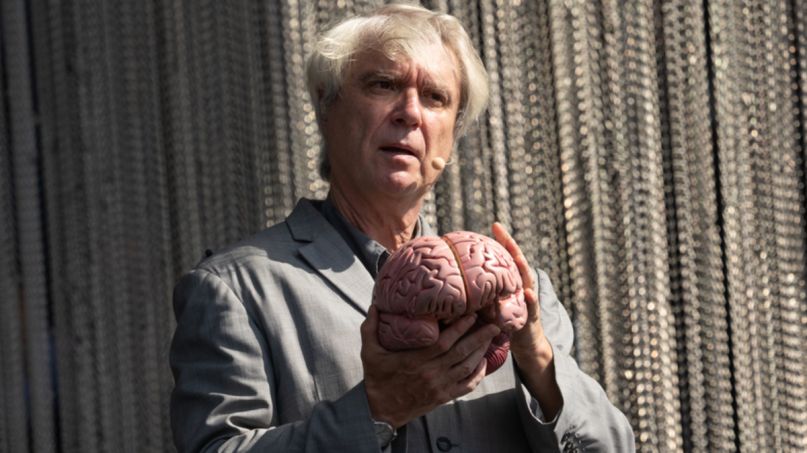 David Byrne is back on the radio. No, he doesn’t have a new single, he has his own radio show. Called Here Comes Everybody, Byrne’s new program on Sonos Sound System Station premiered on Saturday, August 1st, and has since been uploaded on MixCloud for all to hear.

Airing on the first of every month, Byrne’s show sees him curating a new, themed playlist every episode. “I try not to repeat songs, but sometimes one can’t help going back to something one loves,” he explains. “The playlists for this radio show are very often thematic — movie scores, current releases, South Indian surprises, Turkish pop. You may not like them all, but then come back next month and there it will be…. the music you have been waiting for your whole life.”

The first episode — or “Vol. 1,” as it’s called — centers on African pop music. As Bryne notes, there are “some familiar names like the classics from Fela and King Sunny Adé, William Onyeabor, many many more are not included. There are plenty of others — some well known and some not so much. Some thoughts came to me as I was putting this playlist together.” Artists featured on the episode include Angélique Kidjo, Wizkid, Amadou & Mariam, Mokoomba, Keleketla! & Coldcut, and more. Find the full stream and playlist ahead.

Prior to the debut of Here Comes Everybody, Byrne stopped by Sonos Radio Hour to preview the show. In addition to discussing this curation process for his own program, Byrne put together a playlist that included Christine and the Queens, serpentwithfeet, Barış Manço, Ornette Coleman, Chief Dr Sikuru Ayinde Barrister, and others. He even took time to pay tribute to another music icon, the late composer Ennio Morricone, who passed last month. You can also hear that below.

In more Byrne news, the film version of his hit Broadway musical American Utopia, based on the tour behind his most recent album of the same name, is set to debut on HBO later this year. Spike Lee directed the project.