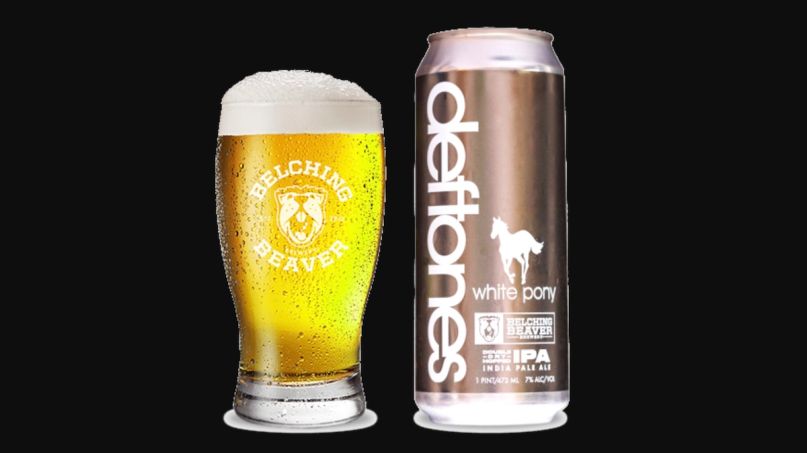 Deftones fans have been drinking in the sensational sounds of White Pony for 20 years. Now, they can actually consume “White Pony” beer, as the alt-metal act has announced a new IPA named after their 2000 landmark album.

In addition to prepping the release of a brand-new album titled Ohms, due September 25th, Deftones have been commemorating the 20th anniversary of White Pony in style. Previously, the band launched a limited-edition merch capsule, and revealed that they are working on a reissue of the LP, complete with a bonus disc of remixes titled “Black Stallion”.

Now, add beer to the White Pony celebration. Deftones have teamed up with San Diego brewery Belching Beaver to create the double dry hopped IPA, and the description is nearly as appealing as Chino Moreno’s soaring vocals:

“White Pony is loaded with intense pineapple aroma, lemon peel, and grapefruit notes. There is an upfront flavor of pineapple but finishes with a soft grapefruit note with a mild bitterness and medium mouthfeel. It has a beautiful amount of layered hop flavors and aromas.”

Moreno stated, “Our approach to beer is similar to how we approach our music, it’s constantly changing and evolving to help ensure we’re releasing a quality product that we stand behind. With our wonderful partners at Belching Beaver, we’re proud to have collaborated on yet another beer that has been created with care and released with pride.”

The good news is that “White Pony” will be available as a 4-pack of 16-ounce cans at select retailers and on draft beginning Friday (August 28th). The not-as-good news is that it will only be available in select states, namely Arkansas, Arizona, California, Hawaii, Idaho, Nebraska, Nevada, Minnesota, Oregon, Washington, and Wisconsin.

If you’re lucky enough to snag some “White Pony” beer, save a can for September 25th. That’s when Deftones release their new LP, Ohms, one of our 20 Most Anticipated Metal Albums of Fall 2020. So far, the band has unleashed the title track, along with an accompanying music video.