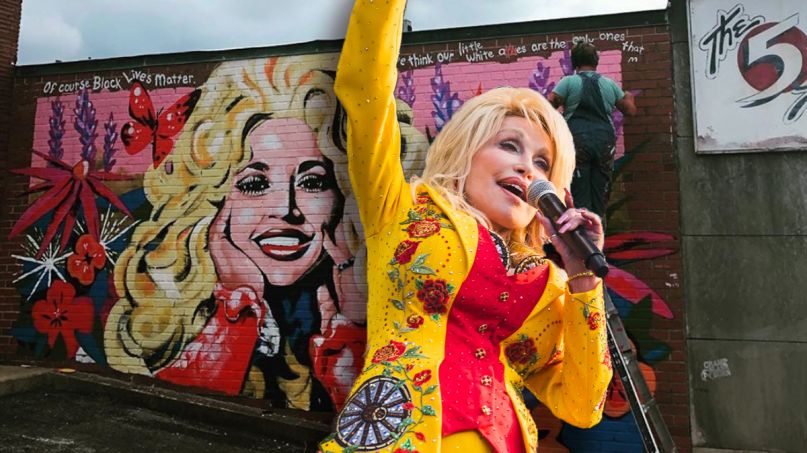 Dolly Parton (photo by Ben Kaye), and The 5 Spot's mural (photo via Instagram/@the5spotnashville)

The very same day that Dolly Parton gave her now-viral position on Black Lives Matter, artist Kim Radford began a mural of the country icon in Nashville. When she saw the quote, Radford knew it was kismet and decided to incorporate Parton’s own words into the project.

Radford’s work lives on the side of The 5 Spot, a Nashville venue that’s known as an institution for rising musicians. Painting the visage of one of the city’s greatest legends on the bare brick just made sense, but it took on a whole new level of meaning once Parton’s Billboard cover story ran.

Along the top of the art, Radford added Parton’s own words: “Of course Black Lives matter. Do we think our little white a**es are the only ones that matter?”

Radford said the timing was a “happy accident”, but one she couldn’t ignore. “It’s like it pokes a hole in all of the frenzy,” she told The Tennessean. “There’s a lot of political friction in the air, and she kind of just decompresses it, once again, like Dolly can do. The timing’s just dreamy.”

Take a look at the mural below. Now, how about we get to work on that Dolly statue to replace the KKK leader in the Tennessee capitol building?

Previous Story
Skin: A History of Nudity in the Movies Gets by Despite Its Blemishes: Review
Next Story
The Last Blockbuster Documentary Ironically Coming to Video-on-Demand This Winter
Popular
More Stories
[fu-upload-form form_layout="media" title="Submit Your Photo"][input type="hidden" name="ugc" value="1"][/fu-upload-form]