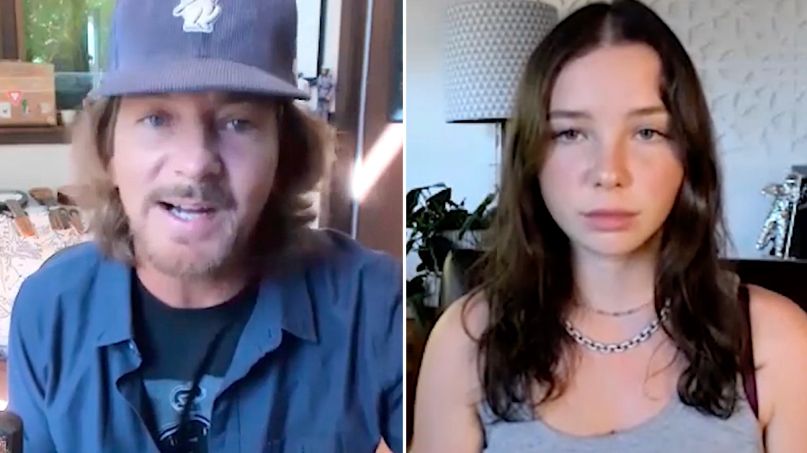 Eddie Vedder was the latest guest on Mind Wide Open, the the weekly mental-health series hosted by Chris Cornell’s daughter Lily Cornell Silver. In the newly premiered episode, the Pearl Jam singer opened up about grief, empathy, and activism, while also reflecting on his fallen peers.

“I am thrilled that Ed offered to do Mind Wide Open,” Lily said in a statement announcing the episode. “His and his family’s support around my series means so much to me. He has always been like an uncle to me and is one of the pillars of support in my life. I know how impactful his voice is to people around the world and I deeply appreciate everything he stands for, so I am really excited for others to watch and hear his insights.”

One of the more emotional aspects of the interview came when Vedder opened up about the Roskilde Festival tragedy, where nine fans were killed in a stage crush during Pearl Jam’s set in 2000. It just so happened that Vedder and the rest of the band had received the news that Lily had been born to Chris and his wife at the time, Susan Silver, right as they were going on to play that set.

“It’s interesting, Roskilde, where there was issues with weather and the crowd, and a horrific situation where lives were lost in front of the barricade… it’s crazy to talk to you about it, because right before we went onstage… we got the news that our great friends Chris and Susan had just had a child,” recalled Vedder. “And her name was Lily, and we kinda cried some tears of joy… This was I think less than 15 minutes before we were gonna go on.”

He continued, “And then we went out with you on our minds, and we were feeling empowered and emotional… and 40 minutes into the show, these terrible events happened.”

Vedder credited Pete Townsend and Roger Daltrey for helping him get through that difficult time, as The Who experienced a similar tragic event in Cincinnati when a crush of people led to 11 deaths in 1979. “There I was in a fetal position, basically, and Pete said, ‘You can handle this,’ and I said, ‘I can’t. I don’t know, Pete, I don’t think I can. I’m losing it.’ And he said, ‘No, you can handle this…’ He empowered me to get my shit together.”

He continued, “And then it became kind of like, make fun of the dour grunge groups, and I think people took it personally, because they were like, ‘Yeah, we ain’t f*cking around.'”

Vedder also compared the appeal of grunge in the early ’90s to that of one of today’s music superstars, saying, “Billie Eilish has a lot of people listening to her… I remember our first record, there’s some sad shit on there, and I’m thinking, ‘Well, this is kind of depressing that tens of millions of people are relating to this.’ But again, it was probably a healthy thing for everybody.”

During the course of Lily’s conversation with Vedder, the Pearl Jam singer also told some personal stories about his friendship with Chris Cornell, and mentioned Soundgarden’s Badmotorfinger is one of his all-time favorite albums. He further touched on the measures taken by the band to help their crew during the pandemic, the upcoming presidential election, and more.

If not for COVID-19, Pearl Jam would have been touring extensively this year in support of their new album, Gigaton. Watch the full conversation between Eddie Vedder and Lily Cornell Silver below.

As previously reported, Lily launched her IGTV series Mind Wide Open on July 20th to honor her late father on what would have been the Soundgarden legend’s 56th birthday. Two weeks ago, she welcomed Guns N’ Roses bassist Duff McKagan as her guest.

I am honored to be joined by a guiding light in my life, Eddie Vedder of @pearljam. We discuss societal and political impacts on mental health, Eddie's own experiences, and the importance of activism and empathy. Reminder to register to vote if you haven't already! To learn more about the importance of voting, especially in the upcoming November election, check out organizations such as @whenweallvote, @headcountorg, and @rockthevote For more information on guests, future episodes, and resources go to the website link in my bio 💙

Previous Story
It’s Jeff Daniels’ Comey Vs. Brendan Gleeson’s Trump in Trailer for The Comey Rule: Watch
Next Story
A Reboot of The Nutty Professor is in the Works
Popular
More Stories
[fu-upload-form form_layout="media" title="Submit Your Photo"][input type="hidden" name="ugc" value="1"][/fu-upload-form]