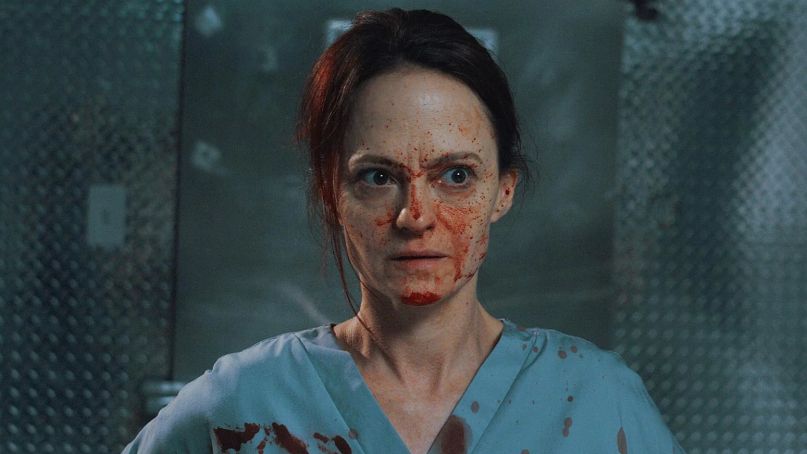 The Pitch: Mandy (Angela Bettis) was having a bad day before her double shift at the hospital. She’s expected to provide a kidney transplant to some local gangsters. The only catch is that Mandy’s new courier Regina (Chloe Farnworth), who just so happens to be her half-cousin, has lost said kidney en route to the hospital. Frantically, they both try to get their hands on a replacement kidney as the clock keeps ticking. Fortunately for them, there’s a whole lotta fresh meat to choose from…

Working 9 to 5: Angela Bettis should be familiar to horror fans, thanks to her iconic performances in a trio of Lucky McKee movies: 2002’s May, 2005’s The Woods, and 2011’s The Woman. She’s a stunning presence, who wears the stress of every one of her characters on her forehead. Over the years, she’s pivoted from troubled teens to frustrated femme fatales — and she’s a total force to reckon with on screen. Granted, Mandy is a bit of a one-note character, but Bettis adds plenty of wrinkles to create the very model of a monster of minimum wage and micro-aggression.

It’s all Takin and No Givin’: Writer and director Brea Grant has been a horror stand by since her appearance in Rob Zombie’s Halloween II, and she’s quickly become the kind of dependable presence that made names like Danielle Harris and Tom Atkins fan favorites. Having been in the industry for over a decade — not to mention, writing and directing since 2013 — Grant is well aware of the doldrums of a thankless job and 12 Hour Shift capitalizes on that notion.

Behind this ’80s throwback is a very current study of the enormous bummer of being an essential worker in torrential times. A nurse having to resort to organ theft to make ends meet is a pretty potent narrative sketch, even without factoring all the other signs that the economy absolutely abuses the night call nurses. Everybody has to go above and beyond to survive here, and though we don’t all have to dodge gangsters in our daily life, there’s very little here to which an audience can’t relate in some fashion.

The Verdict: This strange and anxious mixture of the Working Women comedies of yesteryear (think: 9 to 5, Baby Boom, and Working Girl) with the cramped hospital horror shows of our Saturday night sleepovers (recall: Visiting Hours, Halloween II, and Dream Warriors) is always compelling, always nerve-wracking, mostly funny, and agreeably gross.