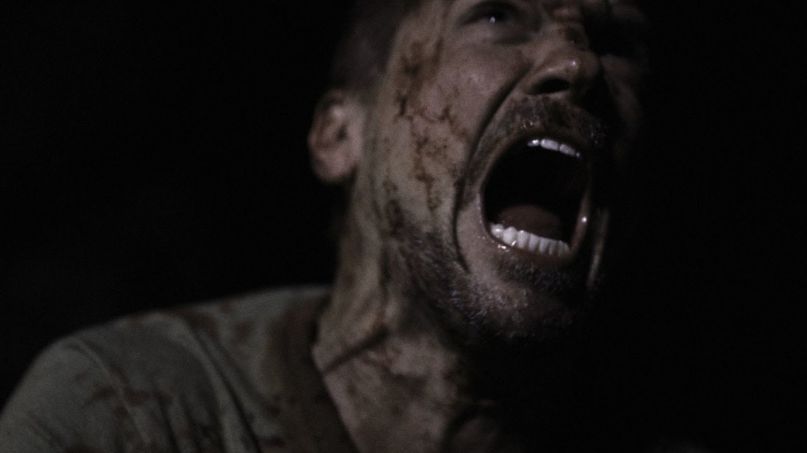 The Pitch: Kathryn Dolan (Adrienne Barbeau) and George Lomack (Marc Blucas) head neighboring rural families struggling to make ends meet in a crumbling economy. Tensions arise when one family signs a contract allowing fracking on their land, but their fates intertwine when this decision inadvertently releases a parasite previously locked within the earth. John C. Lyons and Dorota Swies’ tale of economic horror presents a compelling if uneven picture of the devil’s bargains working class people are often forced to make in order to survive.

Parallel Parasites: Unearth is a timely metaphor in the midst of a pandemic which has crippled the US economy. We meet both families when they’re tottering on the edge of financial ruin and Lyons and Swies take their time exploring their characters’ humanity. When Eddie Drake, a representative from Patriot Exploration, knocks on the door with his contract, we fully understand the weight of this choice. Though we know the likely outcome, we completely understand when George makes his fateful decision, and we join in his heartbreak when he realizes that he has irrevocably changed the lives of everyone he knows and loves.

The comparison between corporate greed and insidious infection is an effective one. Unearth smartly does not focus on the nefarious corporation or otherworldly threat, instead choosing to show the way they both rot the lives of its characters from the inside out. Patriot Exoloration’s heartless capitalism feeds off of these families in the same way the parasite does, showing no difference between the threat lurking within the earth and the one that knocks on the door with a friendly smile and a clipboard.

The Horror In Humanity: Unearth masterfully captures the oppressive and relentless horror of day-to-day life in financial insecurity. Lyons and Swies build this dread effectively before introducing any supernatural elements at all, showing the heartbreaking decisions that must be made when there are no easy answers. Led by Barbeau, the cast is impressive, never seeming to overact and bringing a complexity to what could easily veer into tragedy porn. The film is at its best when presenting this human drama, and it does not shy away from devastating moments difficult for this writer to stomach. However, these are the same moments lived by real people every day. They’re stories worth telling regardless of how hard they may be to watch.

Unsettling and Unsteady: The “creature” design is understated and haunting, wisely going for a less-is-more approach. However, once the fantastical elements start to emerge, the film feels less steady, losing some of its narrative control and pacing. Perhaps because we have been so invested in the human drama, the horrific turn seems to come out of nowhere. A couple of key scenes seem to be missing making plot details unclear and confusing. A few character arcs are left unresolved and key details that happen just out of frame leaving us questioning. And given the amount of time we have spent with each of these characters, this feels especially frustrating. This writer was left longing for an additional 15 minutes to the third act to fully explore what promised to be an upsetting but thrilling climax.

The Verdict: Unearth is an effective metaphor for our times showing a life unfamiliar to many. We read about farmers whose lives are upended by droughts, tariffs, and fracking, but rarely have the ability to fully empathize with them. The film builds real-world dread intertwined with an unsettling monster and its ending serves as a warning to all who would blindly trust capitalism to have our best interests at heart. It’s an imperfect vision, but the message is worth it.