I’m Thinking of Ending Things Will Crush You: Review 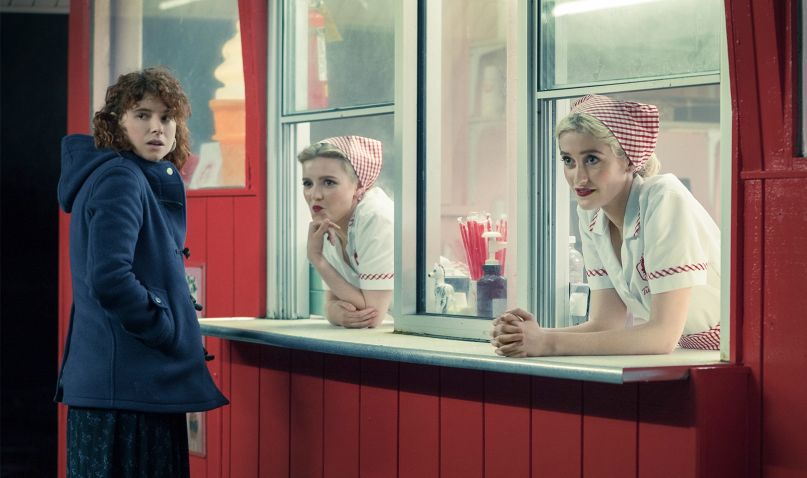 The Pitch: A young woman (Jessie Buckley) travels with her boyfriend of six weeks, Jake (Jesse Plemons), for a long snowy drive to meet his parents for the first time. She’s not sure about this guy; he’s nice, but insecure, a bit of a know-it-all. She’s thinking of ending things. But something’s off about the whole affair as soon as she arrives at the farmhouse where Jake grew up. His father (David Thewlis) and mother (Toni Collette) are giddy to see her — almost a little too giddy. She sees herself in pictures of Jake as a boy. The dog won’t stop shaking itself dry. She sees Jake’s parents as older, and older, and older, and younger. What is happening? Who is Jake? Who is she?

Many a New Day: And now, dear reader, the unenviable burden of unpacking and explicating a Charlie Kaufman film has been passed unto me. One of the most intricate, complicated, compassionately existential filmmakers in modern American filmmaking, he’s never been an easy artist to categorize. His screenplays — Being John Malkovich, Adaptation, Eternal Sunshine of the Spotless Mind — are narratively ambitious lamentations of memory, time, and personhood, the eloquent ravings of a man who can’t shake the notion that one day we will all grow old, get sick, forget who we are, and die. It’s challenging enough when filtered through the mind of a director (Spike Jonze, Michel Gondry), but Kaufman’s self-directed joints (Synecdoche, New York, Anomalisa) remain some of his most hauntingly opaque.

So it goes with I’m Thinking of Ending Things (sorry, i’m thinking of ending things), adapted from the book by Iain Reid, whose elliptical structure and deeply introspective nature seems a perfect fit for Kaufman’s solipsistic brain. The book itself is more explicitly pinned as a psychological thriller, a slow unraveling of a man and woman into a single troubled soul with a dark past it needs to escape; the film’s trailers, which lean on Collette’s casting to make you think it’s a knock-off Ari Aster joint, support that notion. But the film itself is shaggier and more mournful than that, quickly morphing into something more akin to a waking nightmare — its horrors are the more mundane, existential fears of aging out of love, of relevance, of your own mind.

Is An Unspoken Idea Original? In the classic Kaufman mold, ending things is steeped in theatrical and literal esoterica. References to Wordsworth and David Foster Wallace and the poetry of Eva H.D. abound. Jake’s girlfriend recounts the story of how they met at a trivia contest where he tried to impress with philosopher name-drops. A discussion of Cassavettes’ A Woman Under the Influence devolves into Buckley slipping invisibly into a recitation of Pauline Kael’s negative review of the film. Eventually, it feels as though the characters are little more than the sum of the things they read and study. But that seems to be the point — like the late, great Philip Seymour Hoffman’s Caden Cotard in Synecdoche, Jake is a frustrated intellectual who hides his nihilism behind haute culture and pretentions of greatness. His humble home, and batty, poorly-read parents, are a reminder of his failings.

In a lot of ways, Jake in ending things feels like an extension of the work the late, great Philip Seymour Hoffman accomplished in Synecdoche. They’re both frustrated intellectuals with a keen ear for theater (while Jake is not a practitioner of the fine arts, he professes a love for musicals, and high school productions of Oklahoma! haunt his increasingly fractured mind). But he’s haunted by his lamentable past, a stifling upbringing on a farm that disrupts his own self-image as a genius (“genus”, as his mother bowdlerizes). He bristles against his mother’s over-caffeinated praise of him, quick to correct mispronunciations and slow to offer warmth. He’s every bit a navel-gazing Kaufman analog, and like the sadsacks of Synecdoche and Anomalisa, he wrestles with the dual onslaughts of time and loneliness.

Lonely Room: But more than the last gasps of a failing relationship, i’m thinking of ending things becomes more explicitly about aging and dementia and loneliness in its back half. Throughout the film, we see an old janitor (Guy Boyd) go about his day — waking up, driving to the high school where he works, watching the kids rehearse Oklahoma! while he watches on with longing for his own youth. He’s connected to Jake somehow, but in a way that Kaufman leaves to the lyrical margins until the final act, which explodes with sudden theatricality. (Hint: Oklahoma! originated the notion of the “dream ballet,” an extended sequence with no lyrics or dialogue, where ideas are expressed purely through instrumental music and dance.)

These flights of fancy are de rigueur for Kaufman’s works, but here they appear and disappear with all the surrealism of misfired neurons, as if taking place inside the decaying mind of a senile man in the grip of nostalgia. Like Synecdoche, characters age and grow old in the blink of an eye: Thewlis wanders around his house like a forgetful ghost, and Collette’s mother collapses slowly but surely from middle to old age, and finally to her deathbed. This is all viewed through the lens of Buckley’s character, a woman lost in the abyss of Jake’s life — like her, we see glimmers of the familiar in what we’re seeing, but have no idea how to contextualize it. Eventually, you just have to lose yourself in Kaufman’s ambiguities. His films, as the man himself has said, are meant to be felt rather than understood. By the time the film’s final minutes arrive, you’ll be scratching your head and beaming with solemn understanding at the same time.

The Verdict: Whenever, like Jake, I drive back home to the farmhouse where I grew up in downstate Illinois, I get the odd feeling that I’m traveling to some kind of alien planet. The place is familiar but older, renovated empty spaces where my childhood used to be. My small-town high school is still around, haunted by the ghosts of the people I grew up with, worn down by years of small-town purgatory. It’s beautiful, and it makes me terrified of growing old. In all its macabre splendor, i’m thinking of ending things captures that sensation of loss — that desperation to cling to the past, while watching it fall apart before your eyes.

Like any Charlie Kaufman story, attempting to summarize the complexities and surreal insights in a review is a fool’s errand. Even two viewings in, I’m struck by the density of the work itself, its feelings on death and aging and the past shifting with every line of dialogue or idiosyncratic image. You get the sense that you’re stuck in a death dream, the fractured memories of someone desperately wishing, more than anything, that they could do it all over. Maybe you did ask out that girl you hit up at the bar after all. Maybe you did land the lead in your high school musical. Maybe we can be young again.