Joe Keery Gets Five Stars as a Psycho Driver in Spree: Review 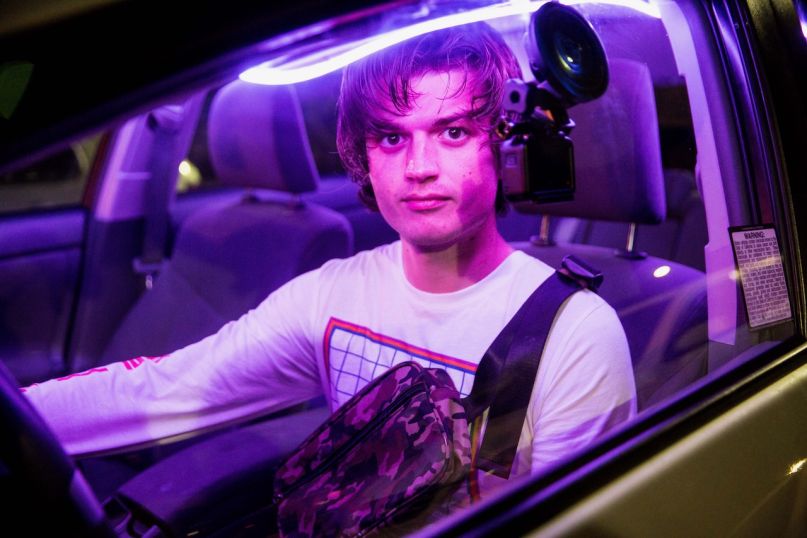 The Pitch: A rideshare driver (Joe Keery) attempts to conquer social media by turning his day-to-day into nightmare entertainment. He doesn’t care for your safety. He has no interest in reaching your destination. He’s not worried about a five-star rating. He only wants more followers — and nothing is off the table. Welcome to Kurt’s World.

We Live In a Society: Rest assured, Spree is not subtle. No, not at all. Writer and director Eugene Kotlyarenko, who co-wrote the screenplay with Gene McHugh, works largely with archetypes and platitudes. It’s a shame play through and through, hammering one point after the other with the volume of a midnight Reddit thread. The film’s principal characters — or rather, the unlucky souls that stumble into his backseat — become more and more insufferable with each ride, but that all feels by design.

Without spoiling too much — though, really, this movie is almost spoiler-proof — Spree is about the coarse reality of social media. More specifically, the ways channels like YouTube, Twitter, Instagram, Facebook, you name it have all bred a society built on validation and fueled by a co-dependence on our second life. Kotlyarenko paints a hyperbolic consequence of this dependency with Kurt, a completely dismantled sociopath who sees zero value to living if it doesn’t include some kind of notoriety.

The problem lies in the execution. Spree doesn’t lean hard enough into exploitation, which is exactly where this movie needs to be for it to truly work. (Or, at the very least, get away with being so blunt and demonstrative.) Instead, Kotlyarenko shuffles around somewhere in the middle, trying to keep his foot in the door of being a tongue-in-cheek commentary on Internet culture while curiously coming off as a finger-wagging morality tale. In other words, the film could stand to be uglier — maybe even a little more nihilstic.

After all, Kotyarenko knows that this is already our reality. Shortly after the film’s Sundance premiere — yes, 10 years ago when the world still enjoyed things like film festivals — he told Deadline: “I think it’s just beyond like negative and positive. It’s just the reality that we’re all forced to deal with every day. So you have to assess it beyond that. Not to say that it isn’t nightmarish, but it’s just like the day-to-day.” The film brilliantly cements that notion by the end, but it hits some major bumps along the way.

Stranger Danger: Perhaps the greatest lesson of Spree is the range of Joe Keery. Look, you’d have to be a complete dolt to not realize the kid’s got talent. As Steve Harrington on Stranger Things, he’s gone from a schmuck with great hair to a single mother with even greater hair to a lovable loser with impeccable hat hair. That’s all without acknowledging his talents behind the mic — and god knows how many other instruments he plays as Djo. Bottom line: He’s an honest-to-god wunderkind.

With Spree, Keery builds upon that currency, proving he can not only a.) carry a film but also b.) scare us to death. As Kurt, Keery is a natural sociopath, oscillating between naïveté and menace with natural ease. One minute he’s the awkward rookie vlogger we all know too well from cycling through YouTube unconsciously, the next he’s the soulless monster we read about in Bret Easton Ellis novels. Watching him effortlessly flex both sides is largely why Spree never crashes and burns. He’s that magnetic.

Some Cast, Though: True, but they’re all given morsels by comparison. David Arquette shows up for a lap dance (and for all of us to say, “Hey, it’s David Arquette!”). Kyle Mooney plays a more desperate and realistic Bruce Chandling to mildly comedic effect. And Mischa Barton rides shotgun to the insanity for a quick gasp. Outside of these blink-and-miss moments is Sasheer Zamata, who is unfortunately tasked with delivering some of the most ham-fisted lines of the script. She elevates the material as much as she can, particularly during the more horror-oriented scenes, but you can only go so far from the page.

The Verdict: Spree spells out the ills of clout and social media, and it’s admittedly hard to dispute any of it. It’s just that the commentary comes off as pedantic, namely due to Kotlyarenko’s script, which relies heavily on buzzwords and banner statements without the finesse to dole them out. In that respect, Spree works better as a performance piece for Keery, who never eases up on the pedal. He’s legitimately haunting as Kurt, and like the best sociopaths in film, there’s a subtle guilt that comes from wanting to see what he’ll do next. Oddly enough, that feeling speaks louder than anything actually said in the film.