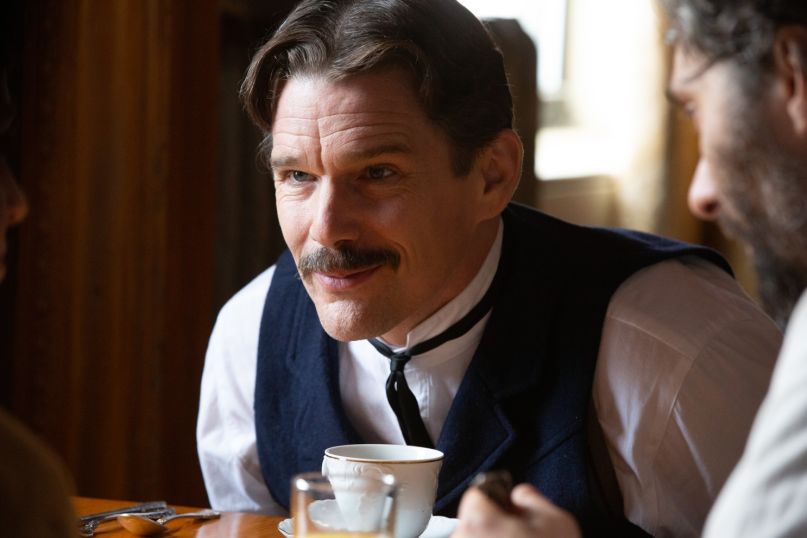 This review originally ran as part of our Sundance 2020 coverage.

The Pitch: By now, we all know the story of Nikola Tesla, spurned early 20th-century inventor and rival of Thomas Edison who invented alternating current, only to die penniless, his name largely lost to history until Christopher Nolan, Elon Musk, and the Fuck Yeah Science! corners of the Internet rehabilitated his unconventional genius. (Best not to mention the fact he was also a eugenicist, but that’s neither here nor there.) Now, one of America’s most under-appreciated minds has a full-throated biopic, with Ethan Hawke in the title role, charting his rags-to-riches-to-rags story. Of course, this being a Michael Almereyda joint, things get deeply weird.

Welcome to Your Life: Make no mistake: Tesla ain’t your typical biopic. Only those who’ve seen Almereyda’s 2015 stunner Experimenter will have an inkling of what to expect — a circular exploration of a complicated pioneer, peppered through with flashes of postmodern whimsy and cheeky anachronisms. Characters pose dramatically in front of rear-projected backdrops, or whip out cell phones in a droll reminder of what Tesla’s race for invention will eventually produce.

The entire affair is narrated with conversational verve by Anne Morgan (Eve Hewson), who famously carried a torch for Tesla, and is consequently well-versed in his eventual legacy. (In an early sign of the film’s weirdness, we get to see Morgan flip through Google search results for Tesla, Edison, and George Westinghouse (Jim Gaffigan, sporting some mighty muttonchops.)

Unlike Experimenter‘s Milgram, who spoke to the audience about his own complicated feelings about his legacy, leaving Tesla’s in the hands of an admirer keeps us at further distance from the man, which is a shame. But it also has the curious effect of confirming that Morgan was at least Tesla’s equal and colleague, though he treated her chiefly as an avenue to her wealthy father, JP Morgan (Donnie Keshawarz).

I Can’t Stand This Indecision: But what about Tesla himself? Despite being the central figure of the story, Hawke plays Tesla as aloof, soft-spoken, and easily exasperated. His voice never rises above a growled whisper, moments of frustration only driving him to even calmer, more deliberate places. He’s consistently aggravated that few other people share his vision for the future, but Tesla seems to place at least some of that on his lack of salesmanship. Hawke underplays Tesla almost to a fault, but that allows him to sink into the legend around which Almereyda’s oddball style undulates.

That’s not to say he doesn’t get to engage in a few moments of sheer whimsy. Most of those come courtesy of Kyle MacLachlan’s occasional appearances as Edison, mining the man’s imperiousness to devilish effect. Through him, we get to see the real Edison’s showman-like attempts to discredit Tesla by claiming alternating current is dangerous by electrocuting dogs (don’t worry, it’s all offscreen) or using it to commit the world’s first execution by electric chair. He’s the Goliath to Tesla’s David, and while they never came to blows, Almereyda at least grants them the ability to duke it out by poking each other menacingly with ice cream cones (“This probably never happened,” quips Morgan from behind her MacBook).

Nothing Ever Lasts Forever: In keeping with Tesla‘s commitment to presentationalism, Sean Price Williams’ cinematography alternates (eh?) between the candle-lit moodiness of smoke-filled rooms and the chiaroscuro contrasts of his larger flights of fancy. That first category of scenes comes closest to approaching tedium — after all, there are only so many times you can listen to bearded dudes in waistcoats talk about amperages.

The aforementioned backdrops never once fool you into thinking they’re real, but then again, they don’t have to: the artificiality is the point. Like Morgan, somehow transported to the modern world through the miracle of cinema, we’re peering back on the life and mistakes of a genius and weighing their ultimate value. Both here and in the real world, Tesla is more legend than man, and we can only ever really comprehend him through that warped lens. Almereyda understands this fundamental hurdle in the biopic formula, and leans into it with refreshing candor.

The Verdict: The movie ends with Ethan Hawke as Tesla groaning a full-tilt karaoke version of Tears for Fears’ “Everybody Wants to Rule the World.” What more do you want?

Where’s It Playing? Tesla is on Video On-Demand now.