The band returns after a six-year hiatus 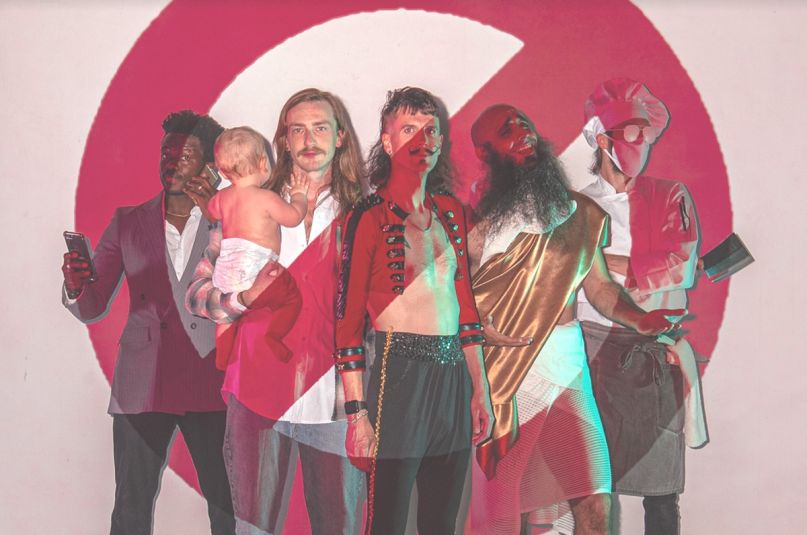 In our new music feature Origins, we invite musicians to take a moment to reflect on the backstory of their latest song. Today, Foxy Shazam invite us into their comeback single, “Dreamer”.

Six years ago, the rock landscape got a little less glamorous when Foxy Shazam announced an indefinite hiatus. Sure, the band members would show up here and there — frontman Eric Nally dipped into a solo career, trumpeter Alex Nauth launched The Skulx — but without them all sharing the stage together, music just felt a little… predictable.

Well, given how unpredictable 2020 has been, there’s really no better time for Foxy Shazam to make their long-awaited return with their new single, “Dreamer”. The track opens with the keyboard notes of Sky White (because how else would you herald the return of Foxy Shazam?), leading listeners into a rock ballad built for arenas. Nally looks around at the “sacred melody” of life before the chorus reaches skyward as he sings, “If this is just a dream, I don’t want to wake up.” Oh, and then there’s the bridge, a dynamic shift that reminds us who Foxy Shazam are and how wonderful it is to have them back.

“Dreamer” comes accompanied by a music video that juxtaposes the band delivering an old-school garage jam and Nally exploring the natural world. As the singer notes, that dichotomy was central to the creation of the song.

“Nature is a profound intuition that has deep meaning to me. I try to apply it to everything in my life, especially when it comes to creating music,” Nally tells Consequence of Sound. “‘​Dreamer’ was one of my first conscious attempts to express this invisible force. I think it’s somewhat indescribable for a reason. You have to find it on a personal level and trust that it will connect you with everything.”

Check out the “Dreamer” clip below, followed by Nally’s full Origins breakdown of the song and video.

“I’m a visual person. So, for this Origins piece, I wanted to point out a few movies that I believe touch on nature in an inspiring way – whether through the story itself or how the directors and artists bring it to life. I referred to each of these films throughout the creative process for ‘Dreamer’ in order to set the tone for the song and provide inspiration for the visuals, cover art and music video.” — Eric Nally

I feel like this princess is unintentionally tapping into something ancient. This particular scene where Aurora sings has always been a point of reference for me on “Dreamer”. Animals recognize her innocence and come to her without fear.

The hand drawn animation is humanistic yet precise, qualities I strive to have in our music. Foxy juxtaposed with Disney. Don’t wake the dreamer.

Although there is a majestic beauty to nature, it can be brutal and unforgiving and you can get torn apart by a bear. What goes around comes around in the circle of life. Primitive raw power inspires me. This movie was shot on location and used all natural light. Raw power is one of Foxy’s ingredients.

Chaos is another key ingredient in Foxy’s nature. Ian Malcolm talks about chaos theory as Steven Spielberg lets it unfold. I’ll never forget this time in Portland while on tour with Foxy when we were staying in a very big hotel that was made of natural wood, cabin style. We had a day off, so Alex and I decided to go down to the gym to get a little workout in. We always try to keep our cardio up on off days. We were enjoying the fact that the gym happened to be empty when, out of nowhere, the door slowly clanks open and Jeff Goldblum peeks his head in. He takes a slow look around the room, stopping his gaze on me and Alex. After giving us a quick look up and down, he disappeared back into the hallway. Not a single word was spoken, and it was one of those moments in your life when you ask yourself ‘did that really just happen?’ It turns out they were filming an episode of Portlandia at the hotel and Jeff was a part of the cast for the day. I remember sitting in the lobby cafe the next morning just hoping someone would ask me to be in the show. I’m still dreaming on that… The chaos is in effect.

Sometimes when I close my eyes I see my face as a kid, I see my mom and dad. I see my boys’ faces. My wife at our wedding. I see all the loved ones, some living some dead. I see haters. I saw a face but I forgot the name. I see sundance, I see the world and I remember all the runs I took around it. I magnify so close I start to see the stars. I see moments in my career. I’m on the stage and there are 100,000 people out there, I’m on the stage and there is no one. I feel everything I’ve ever felt at once. It all becomes one, it all becomes God. I know that there is only ever right now, this moment and it just went.