Plus, the band has launched a new YouTube variety show 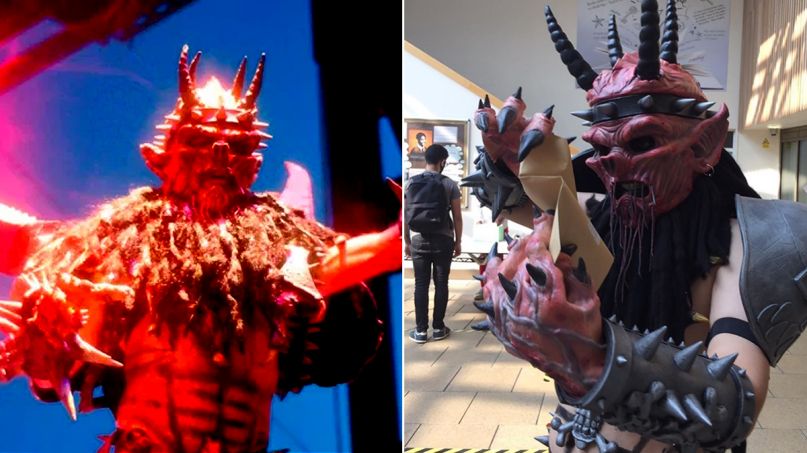 After one and half of months of work, Hernandez-David created his own Oderus Urungus mask and costume. And then the talented teenager went to school to pick up his class results — which unfortunately weren’t as A+ as the outfit.

“I got a B in design technology and a D in art… oh well,” he wrote on Instagram. “All I’d like to say is that you don’t need the highest grades and you don’t need to go to Hollywood to be able to create cool shit. Anyways, this has been a fun project.”

A testament to Hernandez-David’s design skills, the Oderus costume is unmistakably Oderus — down to the tentacle whiskers and armored regalia — and quite a feat given that it was self-made. Looks like somebody might have a future in the props industry, despite his so-so grades.

Hernandez-David shared updates on the progress of the mask and costume from its early mold onward. His Instagram shows other replica pieces he’s made — including a Corey Taylor Slipknot mask — all equally as impressive.

GWAR themselves are set to release the 30th anniversary edition of their 1990 debut, Scumdogs of the Universe, on October 30th. The band also just launched a new YouTube variety show, “Undead from Antarctica”. The first episode premiered over the weekend and featured an appearance from Lzzy Hale of Halestorm.

“It’s like Saturday Night Live,” said guitarist BalSac the Jaws of Death in a press release, “except it’s not on Saturday, it’s on Sunday. And it’s not live, it’s undead. And it’s not on TV, it’s on your computer or phone. And… it’s funny.”

Watch the first episode and check out Hernandez-David’s custom GWAR costume below.

So today I dressed in my home made Oderus Urungus to pick up my A-level school results. I got a B in design technology and a D in art… oh well. All I’d like to say is that you don’t need the highest grades and you don’t need to go to Hollywood to be able to create cool shit. Anyways, this has been a fun project. Let’s try see if we can get an article made about this! Thanks for all the lovely support. Not for sale, will not make any for sale. If you want to buy an Official Oderus piece (or other GWAR pieces for that matter) message @maggotgrace or @sawborg_destructo . @gwar #oderus #sawborgdestructo #oderusurungus #balsac #flattusmaximus #pustulusmaximus #jizmakdagusha #beefcakethemighty #gwarmedallion #scumdogs #scumdogia #sickofyou #antartica #costume #mask #skull #bobgorman #sexecutioner #slymenstrahymen #bohabforlife #loudwire