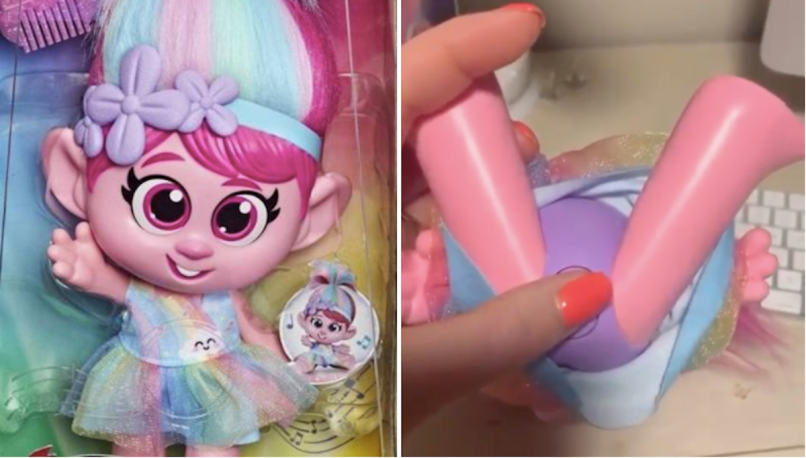 DreamWorks and Hasbro have pulled a Trolls World Tour doll after shockingly poor execution of a not-very-interesting idea. The Giggle & Sing Poppy toy is designed to make laughing noises when placed in a seating position. Pretty lame, yes? Even four-year-olds aren’t thrilled by the act of sitting down. But toy makers were determined to do it anyway, and so they placed an enormous button under the doll’s skirt and between its legs. Now imagine a four-year-old pressing that button repeatedly, and you start to see the problem.

Support against the doll was mobilized by the Instagram user redpillbabe, a QAnon account that has previously spread baseless theories about overpriced cabinets on Wayfair. After acknowledging the bad design, this person suggested that the dolls were manufactured specifically to groom children for child abuse, a claim that caused the post to receive Facebook and Instagram’s “Partly False” fact-check tag. Still, an online petition at change.org has amassed over 100,000 signatures, and Hasboro has responded by discontinuing the toys.

Hasbro spokeswoman Julie Duffy told The Providence Journal that the button’s placement could be “perceived as inappropriate” but it was “not intentional.” She explained,

“This feature was designed to react when the doll was seated, but we recognize the placement of the sensor may be perceived as inappropriate. This was not intentional and we are happy to provide consumers with a replacement Poppy doll of similar value through our consumer care team. We are in the process of removing the item for purchase.”

Still, Hasbro and to a lesser extent DreamWorks are left with a black eye. Say what you want about the evil empire, but this is the kind of thing that never happens to Disney.

Trolls World Tour has become a best-selling quarantine sensation, though not without controversy. After the children’s movie was released on VOD, AMC and Regal Theaters responded by boycotting Universal films.