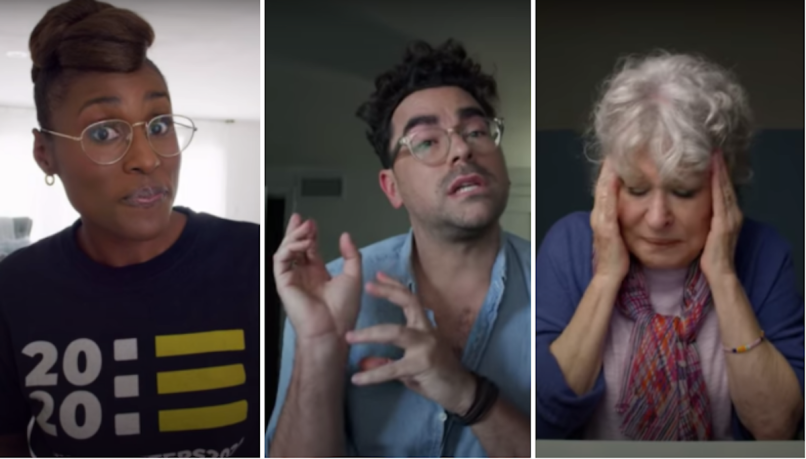 Coastal Elites solves the practical problem of filming in quarantine by borrowing an idea from the theater. It’s a cinematic approach to the monologue play, as each of the five characters take turns speaking into the camera. Here, the camera is apparently supposed to be a laptop fixture, and each of the monologues represents a remote video call. In the trailer, for example, we see Levy’s Mark Hesterman greeting an unseen therapist named Dr. Morton, before launching into a joke-filled rant about identity.

It’s unclear if everyone is in therapy, but from the two-and-a-half minute trailer, we do learn about each character and their struggles in the time of coronavirus. Dever plays a nurse trying to connect through a dangerous disease. As she relates the tale of a potential girlfriend who’s been coughing a lot, she sighs and says, “Let’s hope it’s cancer.” Paulson’s character is going crazy from interactions with a Trump-supporting uncle, while Rae’s part has a particular problem with first-daughter Ivanka.

But the funniest section of the trailer belongs to Midler. Her monologue is about seeing someone in New York City wearing “jeans and a windbreaker — and the hat.” She continues,

“The red hat. The MAGA hat in New York City. Two blocks from the public theatre and Cooper Union, where Lincoln spoke and Larry Kramer! That’s like me going to Nebraska, wearing a yarmulke, waving a rainbow flag, while reading a book!”

So as the title implies, it’s not about life in Nebraska. Coastal Elites is directed by Jay Roach (Meet the Parents, Bombshell) and written by playwright Paul Rudnick, best known for comedies like I Hate Hamlet, and his many humorous sketches in The New Yorker, aka the preferred bathroom reading of coastal elites everywhere. He also wrote Sister Act, Adams Family Values, and The Stepford Wives, so it’s quite a resumé. Check out the trailer below.

Editor’s Note: You can also maintain your social distance with style by picking up one of our custom face masks, like our new Bolt Mask and our Beverly Hills Plaid design. Proceeds will benefit MusiCares’ COVID-19 Artist Relief fund supporting independent musicians, as well as Consequence of Sound, an independent media company.