The post punks deliver ripping renditions of "Reptilia", "Helter Skelter", and "I Wanna Be Sedated". 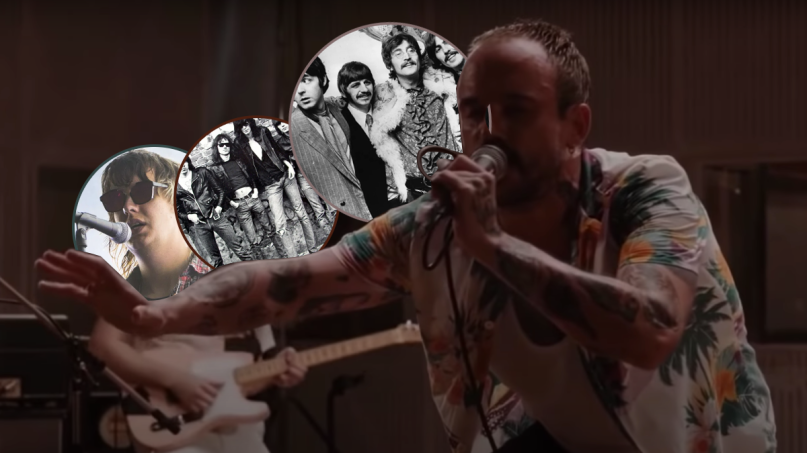 IDLES, The Beatles, Ramones, and The Strokes (photo by Philip Cosores)

IDLES took over Abbey Road Studios for a three-part livestream this past weekend. Coming in support of their forthcoming full-length, Ultra Mono, the sets featured a bevy of new tracks — including singles “Model Village”, “A Hymn”, “Mr. Motivator”, and “Grounds” — in addition to past favorites like “Colossus”, “I’m Scum”, and “Never Fight a Man with a Perm”. The Bristol post punks also tucked in a few covers, including takes on The Beatles, The Strokes, and The Ramones.

First came their dirge-y rendition of The Ramones’ classic “I Wanna Be Sedated”. Smoldering in its own sedation, the cover saw a psychedelic war wage between guitarist Mark Bown and bassist Adam Devonshire.

Set No. 2 brought IDLES’ ripping version of The Strokes’ “Reptilia”. The band kept the melody largely intact, but scratched it up with Joe Talbot’s growl and their own brand of tension. Torn up but fun as it was, the song actually felt like it could be an IDLES original, especially when Devonshire laid into those bass notes.

The whole livestream event closed out with The Beatles’ “Helter Skelter”. After a bit of a miffed opening, the band delivered a completely unhinged reworking of the Fab Four’s heaviest track. Lennon would be proud.

Watch each of the covers below, and you can catch the full replay of IDLES’ Abbey Road livestream sets on YouTube. Ultra Mono, which features contributions from Savages’ Jehnny Beth and Kenny Beats, is due out September 25th from Partisan Records.