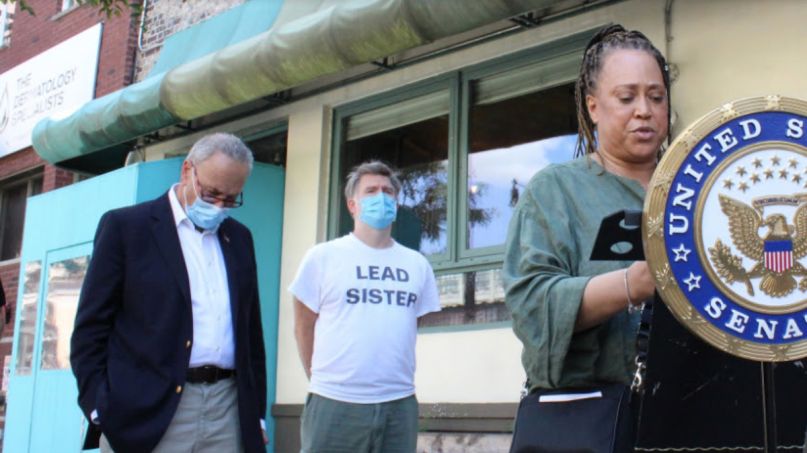 The pandemic has proven especially dire for the live music scene, as the National Independent Venue Association found that 90% of independent music venues could close without financial aid. That’s why NIVA is fighting hard to get the bipartisan Save Our Stages Act passed. To promote their efforts, the organization gathered LCD Soundsystem’s James Murphy, New York’s Senator Chuck Schumer, and a number of New York-area venue owners for a press conference outside of Brooklyn’s Baby’s All Right on Tuesday.

After being introduced by Baby’s co-owner/music director Billy Jones, Senator Schumer stepped to the mic first. “Our live venues are the pulse, the heart, and the soul of New York,” he said. “Since live venues have grown and flourished, New York has grown and flourished.” Focusing on how venues attract people to the community and help it thrive, Schumer noted, “These places have to survive. Saying, ‘Well, we can do without these’ is like saying you can do without your liver, or your right arm.”

He then detailed the SOS Act, explaining it would create a $10 billion small business association fund. Venues could receive grants equal to 45% of their 2019 gross revenue up to $12 million for 6 months of operating expenses or other flexible options. Schumer promised the do everything he could to pass the SOS Act — “because it is so effin important” — and ended by urging everyone to reach out to their senators to express support for the bill.

Marauder co-founder/NIVA Executive Director Rev. Moose was next at the mic, followed by Murphy. Appearing to speak from the top of his head, the LCD founder discussed how venues are “economies in themselves; they’re communities in themselves.” He talked about how independent venues revitalize less popular areas and while fostering a diverse American music scene.

“This is an infrastructure problem, and it has to be seen as an infrastructure problem that requires funding. I mean, even if all you care about is the bottom line, this city exports creative work. This is what we do as a city. And that work is sponsored and fostered by the independent venue and promoter scene of New York, just like it is in every other [city]. The bigger companies that serve a need as well, don’t serve that need of sticking with artists in the beginning, of serving one, small community, of one, small scene. And those scenes are the things that we now know as the primary music scenes that make America amazing, that make our music scene amazing. Punk rock in the city is what I grew up with. It made me want to move here and make music as my life… [The Save Our Stages Act] is the least we can do as a group of people who take care of our own. And I don’t mean our own as musicians, I mean our own as citizens. This is as important as roads, as important as cellphone towers. This is how we communicate with each other.”

Murphy’s remarks, as someone ingrained in the NYC music scene, were particularly powerful. Other speakers during the event included Brooklyn venue owners Kae Burke of House of Yes, Grace Blake of Iridium, and Dhruv Chopra of Elsewhere, as well as musician Sean McVerry. Watch the whole press conference below, and then write your senators.

Back in June, a group of artists including Billie Eilish, Dave Grohl, Robert Plant, André 3000, Bon Iver, and more signed a letter to calling on Congress to save independent music venues.

Editor’s Note: When live music does return, it probably won’t hurt to own a mask, so grab one from our new Consequence of Sound store. In addition to supporting our independent media company, a portion of the proceeds will benefit MusiCares’ COVID-19 Artist Relief Fund.