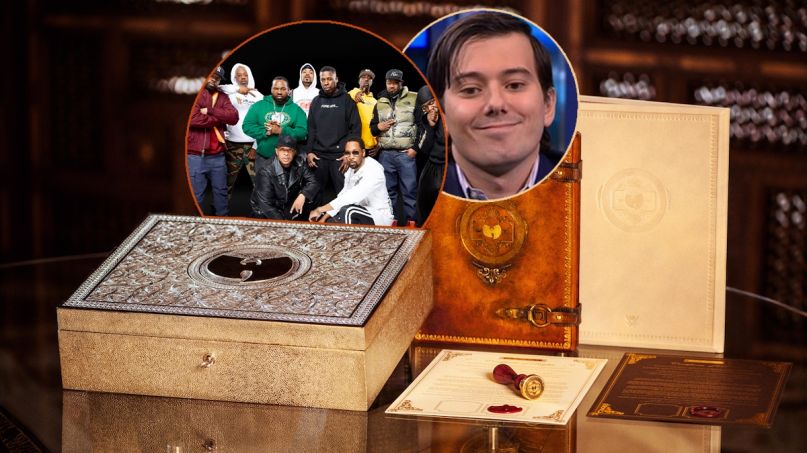 Wu-Tang Clan, pharmadouche Martin Shkreli, and Once Upon a Time in Shaolin

The relatively short history of Wu-Tang Clan’s seventh studio album, 2015’s one-of-a-kind Once Upon a Time in Shaolin, is already something of a legend. It’s a weird, wild tale involving pharmadouche Martin Shkreli, $2 million auctions, diss tracks, and federal forfeitures. Now, the whole sordid story will be told in a new Netflix film.

The announcement of the project was tucked into a press release about screenwriter Ian Edelman’s new movie, American Sole (starring Pete Davidson and O’Shea Jackson Jr.). As Collider reports, Brittany Runs a Marathon director Paul Downs Colaizzo will helm the project, with Wu-Tang’s own RZA producing alongside Brad Pitt’s Plan B. Edelman will be working off Colaizzo’s original draft of the script.

For those who don’t know, the Wu-Tang Clan only produced one physical copy of Once Upon a Time in Shaolin, a 31-track double-LP. The album sold at auction for $2 million in May of 2015, coming with an 88-year copyright making its commercial release impossible until 2103. Shkreli, a hedge fund manager, was revealed as the buyer in December, some three months after he became infamous for jacking up the price of a cancer and AIDS medication from $13.50 to $750 a pill.

The unmasking of Shkreli as the buyer came as he was targeted by federal agents for securities frauds. While out on a bail, he further drew Wu-Tang’s ire with threats to destroy the record, and calling out Ghostface Killah directly. Shkreli ended up playing Shaolin during a livestream following the 2016 election. However, after being found guilty of fraud in 2017, he attempted to sell the record on eBay. Though RZA sought to buy it back, Once Upon a Time in Shaolin ended up seized by the federal government as part of a $7.36 million assets forfeiture. Shkreli is currently serving a seven-year prison sentence, and was recently denied an early release request after he claimed to have discovered a cure for COVID-19.

Who knows how much of this will end up in Colaizzo and Edelman’s movie, but they clearly have plenty with which to work. There’s no timeline or casting information for the Shaolin movie as of now. Still, it’s safe to say none of the album’s music will likely appear on the soundtrack.