Metallica Rehearse in Person Together for First Time Since Pandemic Started: Watch [Updated] 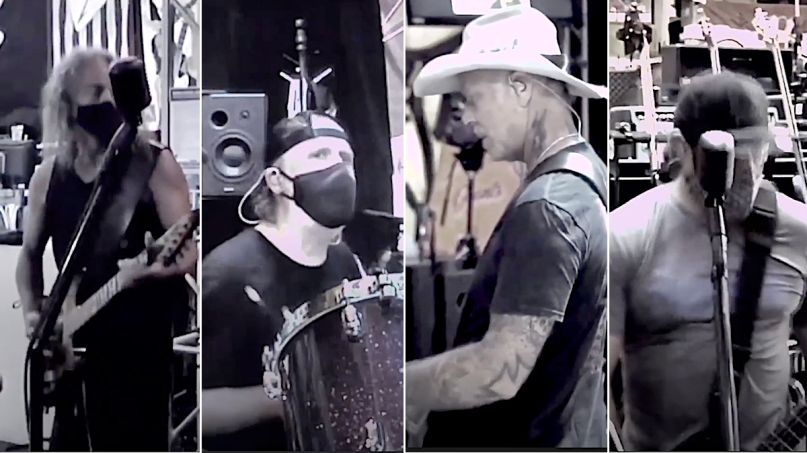 Back in June, drummer Lars Ulrich revealed that the members of Metallica were working on new material over Zoom and email, with bassist Robert Trujillo adding a short while later that the band would eventually “get in that room together and … bang the stuff out.” Now, it appears that Metallica have done just that.

The metal legends posted a brief clip on their Instagram Stories showing all four members of the band in the same studio. All except frontman James Hetfield are wearing masks as they tinker around and jam their classic song “Creeping Death”.

Not only is it likely the first time the band has practiced together during the pandemic, it could very well be the first time Hetfield has been in the same room with all his bandmates since entering rehab last fall. The singer sought help for his longtime battle with addiction, resulting in the band postponing its late 2019 tour of Australia and New Zealand.

If they’re not working on their follow-up to 2016’s Hardwired … To Self-Destruct, Metallica could be rehearsing for their “All Within My Hands Helping Hands Concert”, which was rescheduled to September 12th, and is still on the board. The benefit show is still slated to take place at The Masonic in San Francisco, although details are yet to be revealed.

Update: Metallica have posted a longer clip from the studio on Twitter, and have hinted that they are rehearsing for a performance on Howard Stern’s SiriusXM show. “There are a lot of Stern looks around HQ today,” tweeted the band. “We’re taking rehearsals very Siriusly.” See the new tweets below.

Metallica also have a slew of South American shows set for December (which were rescheduled from April), but it remains to be seen if they’ll be able to honor those new dates amid the pandemic.

When talking about work on a new album in June, Trujillo said, “We’ve gotta get through this quarantine and all this stuff that’s happening with that. In the meantime, we’re creating, and I think that is really cool, because sometimes it takes a while to get the band together and get four individuals who are living in different places in the same room.”

He added, “We can make music from our homes and work together and build stuff — and then we’ll get in that room together and we’ll bang the stuff out, but we’ll be 40 steps ahead.”

Visit Metallica’s Instagram stories to see the footage of the band in the studio together, or watch it below, thanks to a YouTube user who captured and posted the video.

Apparently, Lars went a little too hard in the studio, and got a nasty blister on his index finger, as seen in his Instagram post below.

What the hell is going on at HQ?! pic.twitter.com/B401TQ1qjS

There are a lot of Stern looks around HQ today. We’re taking rehearsals very Siriusly.