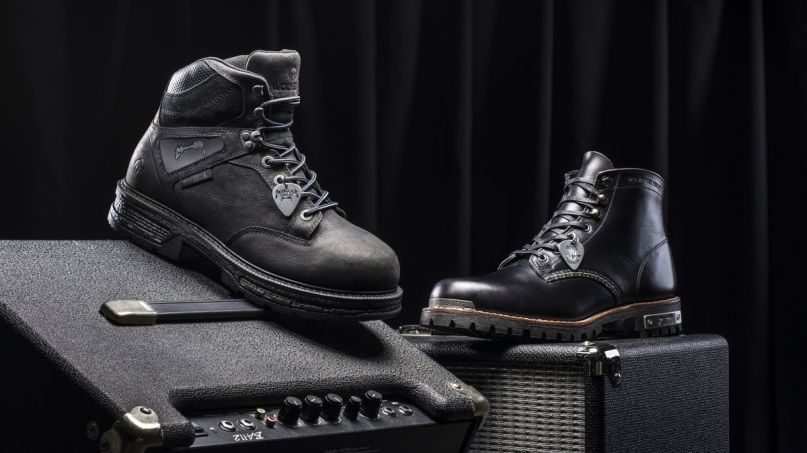 Metallica and footwear company Wolverine have joined forces for two new pairs of boots inspired by the metal act. All proceeds from the collaboration will go toward benefitting trade-school students via the Metallica Scholars Initiative and the band’s All Within My Hands Foundation.

The Metallica Scholars 1000 Mile Axel and Hellcat UltraSpring boots retail for $400 and $150, respectively, and are currently available for pre-order.

The Mile Axel is based on Wolverine’s 1000 Mile boot silhouette and touts other band-specific features including “a Metallica Key logo-inspired metal heel plate, an All Within My Hands metal toe kicker, metal-tipped laces, and a metal guitar pick tag.”

Those looking for a more rugged work boot can opt for the Hellcat UltraSpring. The boot combines “traditional work boot durability” with the “modern performance of Wolverine UltraSpring cushioning.” It also has a Metallica Key logo stitching and a guitar pick tag.

“Wolverine shares the same vision that we had when creating the Metallica Scholars Initiative – that it’s incredibly important to create and sustain a strong and resilient American workforce,” Metallica’s James Hetfield said in a press release. “[All Within My Hands] is our way of giving back and building future generations. More importantly, we are helping these students achieve their dreams and transform their lives through the workforce education programs offered at community colleges all across the country.”

In other Metallica news, the band confirmed their appearance on The Howard Stern Show on SiriusXM on Wednesday (August 12th) after previously teasing the performance. Yesterday, the band also announced an upcoming concert to be broadcast at drive-in theaters, and continued its weekly #MetallicaMondays archival series with a 2004 performance in Germany.

Pre-order the boots via Wolverine’s website. Watch the latest #MetallicaMondays below.