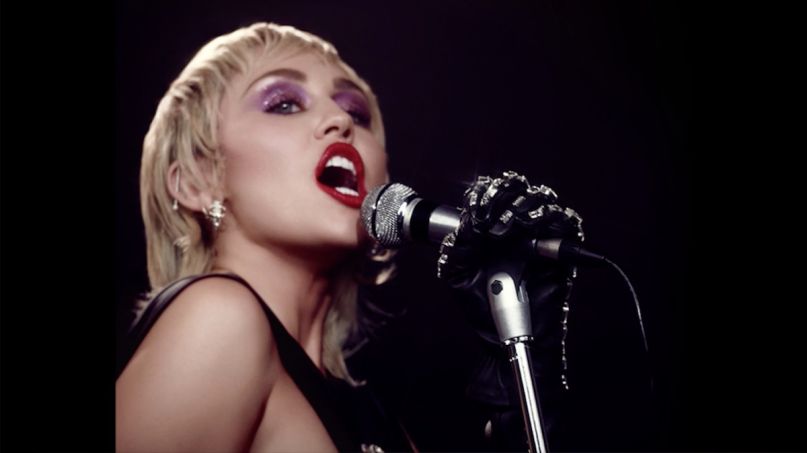 It’s been three years since we last got a full-length album from Miley Cyrus, but it looks like she aims to change that soon. The pop star has returned to the spotlight to share her new single “Midnight Sky” alongside a glitzy music video she herself directed. Watch it below.

“Midnight Sky” is a flashy synthpop number that’s arguably sleeker than anything Cyrus has released before. In the song’s music video, she can be seen performing the track live while dressed in what’s essentially designer biker chic: black leather apparel encrusted with diamonds, fancy chains, and high-end detailing. It’s a certified glam rock look, and one that matches the sound of the song rather well.

Fans hoping this is the latest sample of the long-teased She Is Miley Cyrus may be in for a shock. That album, which was to compile three six-song EPs, including last year’s She Is Coming, appears to be shelved. In an interview with Zane Lowe on Apple Music, Cyrus explained that “Midnight Sky” came about while she was conceptualizing the video for a different song. When she shifted gears to make the visual about this new track, she saw it as a moment to reclaim her narrative after a very public divorce from Liam Hemsworth, vocal cord surgery, and finding sobriety (and the life-altering reality of the pandemic). That meant focusing on new material instead of following through with the She Is Miley Cyrus plan.

As Cyrus explained to Lowe,

“I guess I was feeling like it didn’t make sense for me to continue the next two projects. She is Coming was a one-of-three EP drop, and I felt like, for my life, the way it evolves, how quickly it changes, how quickly I change, how public my experiences are, it doesn’t make sense for me to try to wrap up that big of a body of time in just a few songs and also even in a record, because I really have always enjoyed dropping singles, rather than the full body of work, because it allows you to talk to your fans in real time. It’s like I feel something. I experience it. I write it. I release it. When you write a record, a lot of the time, you’re writing your experiences, and then by the time the record comes out, you’ve evolved past that experience.”

So while it still might be some time before we get a Younger Now follow-up, at least we have “Midnight Sky”. Check out the single’s accompanying video, which happens to be Cyrus’ directorial debut, below.

Just before the COVID-19 pandemic began earlier this year, Cyrus finally settled the $300 million copyright lawsuit triggered by her song “We Can’t Stop”. Since then, she’s been performing cover songs all over the place, including Pink Floyd’s “Wish You Were Here” on Saturday Night Live and The Beatles’ “Help!” in an empty Rose Bowl Stadium.