20 Most Anticipated Metal Albums of Fall 2020

by Spencer Kaufman and Jon Hadusek 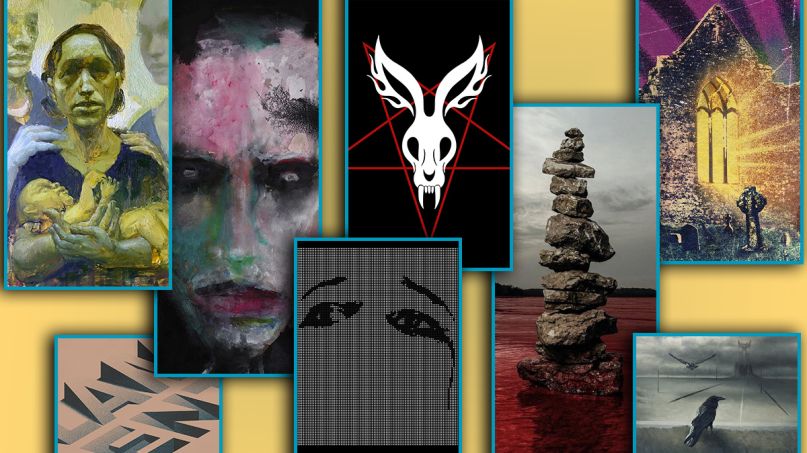 This year has been a gut-punch for the music industry, and the world as a whole. As a global pandemic continues to wreak havoc on our lives, it can be helpful to cling to the things that distract us from the daily grind. One of those things is music, and while the concert industry remains shuttered, we still have new albums to look forward to in the coming months. And in the world of metal, the list of fall releases is impressive and captivating.

The first half the year yielded a number of noteworthy heavy albums, as evidenced by our list of the Top 20 Metal Albums of 2020 So Far. And, for a while, it didn’t look as if the fall would be as fruitful as the spring. However, in the past few weeks, a number of notable acts announced fall albums, including Deftones, Marilyn Manson, Corey Taylor, and more. Extreme metal will be well represented, as well, with veteran acts like Napalm Death, Kataklysm, Enslaved, and others all set to unleash new LPs in the next few months.

While the future is uncertain, one thing is for sure: heavy metal and hard rock will continue to soldier on. Through historical ups and downs, the heaviest music has always endured, and not even a global pandemic can stop the power of the riff.

Below, see our picks for the 20 Most Anticipated Metal Albums of Fall 2020.

Why We’re Excited: Philip Anselmo of Pantera fame has long since embraced a slower, doomier brand of heavy metal. His latest project, En Minor, is what Anselmo calls “depression-core” — and it’s not far off. This isn’t “Walk”. If you’re looking to rage, En Minor instead offers the opposite: A brooding, thoughtful comedown. It’s Anselmo’s gothic country record, and a twisted one at that. The singer has been outspoken about his love for horror films and noir over the years. En Minor appears to be the musical realization of those affinities. The single “Blue” is as grim and sincere as anything Anselmo’s written, evoking his inspired yet relatively obscure work under the Southern Isolation moniker. –Jon Hadusek

Why We’re Excited: It’s no secret that Zakk Wylde loves all things Black Sabbath, and now he’s taking his passion for the metal godfathers to a new heights. He and his bandmates Blasko (bass) and Joey Castillo (drums) in the tribute act Zakk Sabbath have recreated Black Sabbath’s 1970 self-titled debut album in celebration of its 50th anniversary. Dubbed Vertigo, the LP features Zakk and company delivering a faithful re-recording of the landmark album, which pretty much ushered in the heavy metal genre. As an homage to the past, Vertigo will not be available digitally. Instead it will only be released in three formats: digipak CD; CD/DVD hardcover book: and limited-edition yellow vinyl. –Spencer Kaufman

Marilyn Manson – We Are Chaos

Why We’re Excited: Coming off two excellent albums in The Pale Emperor and Heaven Upside Down, Marilyn Manson enjoyed a creative resurgence in the 2010s. Now, with a new decade upon us, the Antichrist Superstar is back with his 11th studio album, We Are Chaos. This time around, Manson has tapped outlaw country artist Shooter Jennings as his producer, with an attention to melody clearly evident on the recently released title track. The song is a mid-tempo ode to ‘70s glam-rock, powered by Manson’s distinct vocal rasp, offering an infectious taste of what’s to come from the ever-evolving shock rocker. –Spencer Kaufman

Why We’re Excited: Prior to the pandemic, it was expected that Mastodon would release a new album in 2020. However, like so many other things in the world, those plans have been put on hold. Thankfully, the Atlanta metal masters are tiding fans over with a compilation titled Medium Rarities, which collects instrumentals, one-off singles, live tracks, cover tunes, and other obscurities. The highlight, though, is a brand-new song called “Fallen Torches” featuring longtime collaborator Scott Kelly of Neurosis. The track was originally slated to be released in conjunction with Mastodon’s 2019 European tour, but never saw the light of day until now. Add in covers of Feist, The Flaming Lips, and more hard-to-find tracks, and Medium Rarities should be a treat for all Mastodon fans. — Spencer Kaufman

Why We’re Excited: Hailing from NYC, Uniform are a band firmly entrenched in the times. Their acerbic brand of heavy music once filled the bars and venues of Brooklyn and Manhattan, left vacant after the pandemic hit New York like a cataclysm. Uniform’s music always had a tinge of the city’s sinister side — the nihilism of the sprawl and grime. But now songs like lead single “Delco” and the title track from upcoming LP Shame come off like the soundtrack to the apocalypse. In better times, Uniform would have played a record release show with like-minded acts at Saint Vitus Bar, where they often performed. It probably would have been a good time. Instead, the music is left to speak for itself. It’s strangely fitting, given the passion and vitriol the band puts down on record. Yet, it also serves as a reminder that we must support these bands, buy their albums directly, during times like these. Even the apocalypse needs a soundtrack. –Jon Hadusek