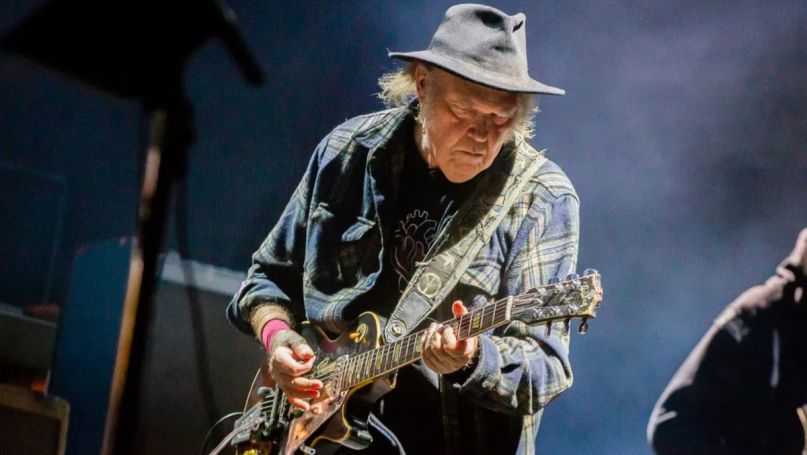 Neil Young may be having the busiest pandemics of any non-governmental American citizen. When he’s not bashing Trump or rewriting protest songs about Trump or suing Trump, he’s been performing his lovely Fireside Sessions and churning out archival music. Now, the folk rock icon has announced the next three releases coming to his Neil Young Archives website, and one in particular is sure to have longtime fans excited.

The big one is the long-awaited release of Neil Young Archives Volume 2, first promised after Vol. 1 dropped in 2009. The last we really heard anything about the collection was in 2014, but it looks like it’s finally ready for the world. Expected to span material from around 1973 to 1982, Young previously said Vol. 2 would be “full of albums that weren’t there before — stuff I did that I never put out.” Though we already received the “lost” album Homegrown earlier in the summer, Young previously mentioned records like 1976’s Chrome Dreams and 1977’s Oceanside-Countryside would be featured.

NYA Vol. 2 will be available via his Neil Young Archives website on November 6th. That same day will also see the release of Return to Greendale, a live set from his tour with Crazy Horse behind 2003’s Greendale. Then on December 6th, another Crazy Horse concert recorded at the Santa Cruz’s Catalyst Club in November 1990 will be shared under the title Way Down in the Rust Bucket.

In a letter on his website announcing the trio of releases, Young also revealed that a project called The Timeless Orpheum is nearing completion. “It is a concert film with a lot of twists and turns, telling my story and yours, our history together,” he explained. He noted it would first debut exclusively to NYA subscribers via the Hearse Theater before a wider release. “Maybe in blu ray, which is the highest quality product for movies, much better than streaming because the sound and picture are much more clear. We live in the streaming world now and quality is for the few who seek it,” he said, adding that Timeless Orpheum will live on NYA either way.

The letter ends with a promise of “big news” about “how we sell to the general public.” Such a move comes as Young has severed his website’s ties with Google and Facebook, nixing those websites’ logins. While the emailed announcement of the decision didn’t specify why he’d chosen to disengage with Google, Young directly called out Facebook. “Facebook knowingly allows untruths and lies in its political ads to circulate on the platform, while bots sow discord among users,” he wrote. “Sowing dissent and chaos in our count ry via political disinformation is something we can not condone. Simply put, Facebook is screwing with our election.”

Guy’s been an American citizen for like five months and he’s already more patriotic than most. The move to remove Facebook and Google from Neil Young Archives will reportedly cost $20,000.