by Alex Young and Spencer Kaufman 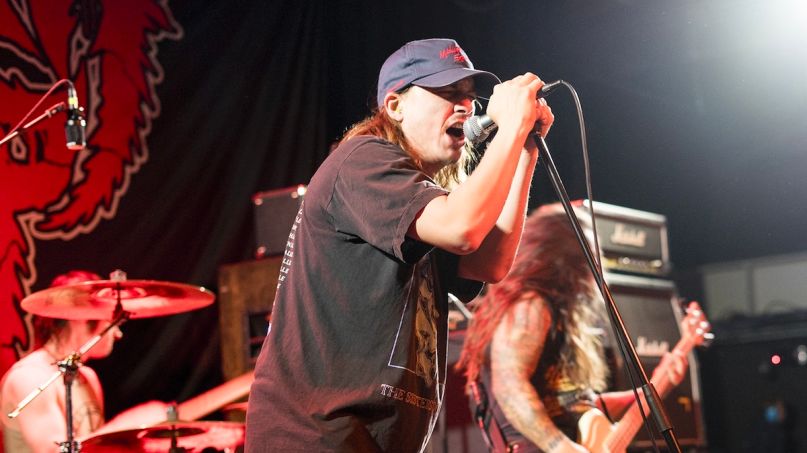 Riley Gale, frontman of the acclaimed Texas thrash metal band Power Trip, has tragically died at the age of 34.

A statement from Power Trip on Tuesday evening (August 25th) confirmed his passing. The circumstances behind his death were not immediately made available, but it was revealed that he died on Monday night (August 24th).


Power Trip’s most recent full-length, Nightmare Logic, ranked among our favorite albums of 2017, and also made our list of the Top 25 Metal Albums of the 2010s. As of March, the band was back in the studio working on new record. In June, they released a surprise live album.

“Dear Power Trip fans worldwide. It is with the greatest of sadness we must announce that our lead singer and brother Riley Gale passed away last night.

Riley was a friend, a brother, a son. Riley was both a larger than life rock star and a humble and giving friend. He touched so many lives through his lyrics and through his huge heart. He treated everyone he met as a friend and he always took care of his friends. We will celebrate Riley’s life and never forget the great works of music, charity, and love that he left behind. You, the fans, meant so much to him, please know how special you are. If you have a memory of Riley please share it, no matter how small, as we remember him.

Please respect our wishes for privacy during this time. In lieu of flowers please send donations to Dallas Hope Charities.

Since their formation in 2008, Power Trip have been among the leaders of a new wave of thrash metal, with a sound bridging thrash and hardcore punk. They’ve built up a substantial following, thanks in large part to their electrifying live shows. Last year, Power Trip co-headlined a North American tour with High on Fire.

After signing a record deal with Southern Lord, Power Trip released their debut album, Manifest Decimation, in 2013, followed by the aforementioned Nightmare Logic in 2017.

Earlier this year, Gale provided guest vocals on the new single “Point the Finger” from Body Count, even appearing in the music video for the track.

Tributes to Riley Gale have already started to pour in from numerous metal acts via social media. Those posts can be seen below, along with Power Trip’s music video for “Executioner’s Tax (Swing of the Axe)” and a Singapore concert from February of this year.

Just heard about Riley. Goddamnit. Sending love to his family and friends and his band. @powertriptx

Very sad to hear about the death of Power Trip singer Riley. Saw them open for Cannibal Corpse and they were fucking awesome. Sending positive energy to the bandmembers and his family 🖤🖤🖤 https://t.co/pzJU3D0rwk

Rest in Power, Riley Gale of Power Trip. We were looking forward to making memories together next year. Our thoughts are with you all. https://t.co/zbuynYcm55

Rest In Peace Riley.
you made a huge dent in heavy music history that will last forever.
our deepest condolences to his friends, family and the guys in @powertriptx https://t.co/bIqlX49dfN

Riley always put on for the home team, he and Power Trip helped open a lot of doors for us and many other bands out of the Texas hardcore scene over the years. The music world lost a huge star, Rest in Power Riley Gale. https://t.co/DK75XRKi5N

Love you so much. https://t.co/qKcETeiG57

We are heartbroken to hear about Riley’s passing. He was a top notch dude who always exuded positivity and joy through his art. Rest in power.

Rest In Power Riley Gale. A great frontman, wise beyond his years & bad ass on the mic! You will be greatly missed. Such a loss for heavy music. Our condolences to all who loved him. #RipRileyGale #PowerTrip https://t.co/t26lcEb4oG

Sending all of our love to @powertriptx, their family and friends. Rest in power, Riley